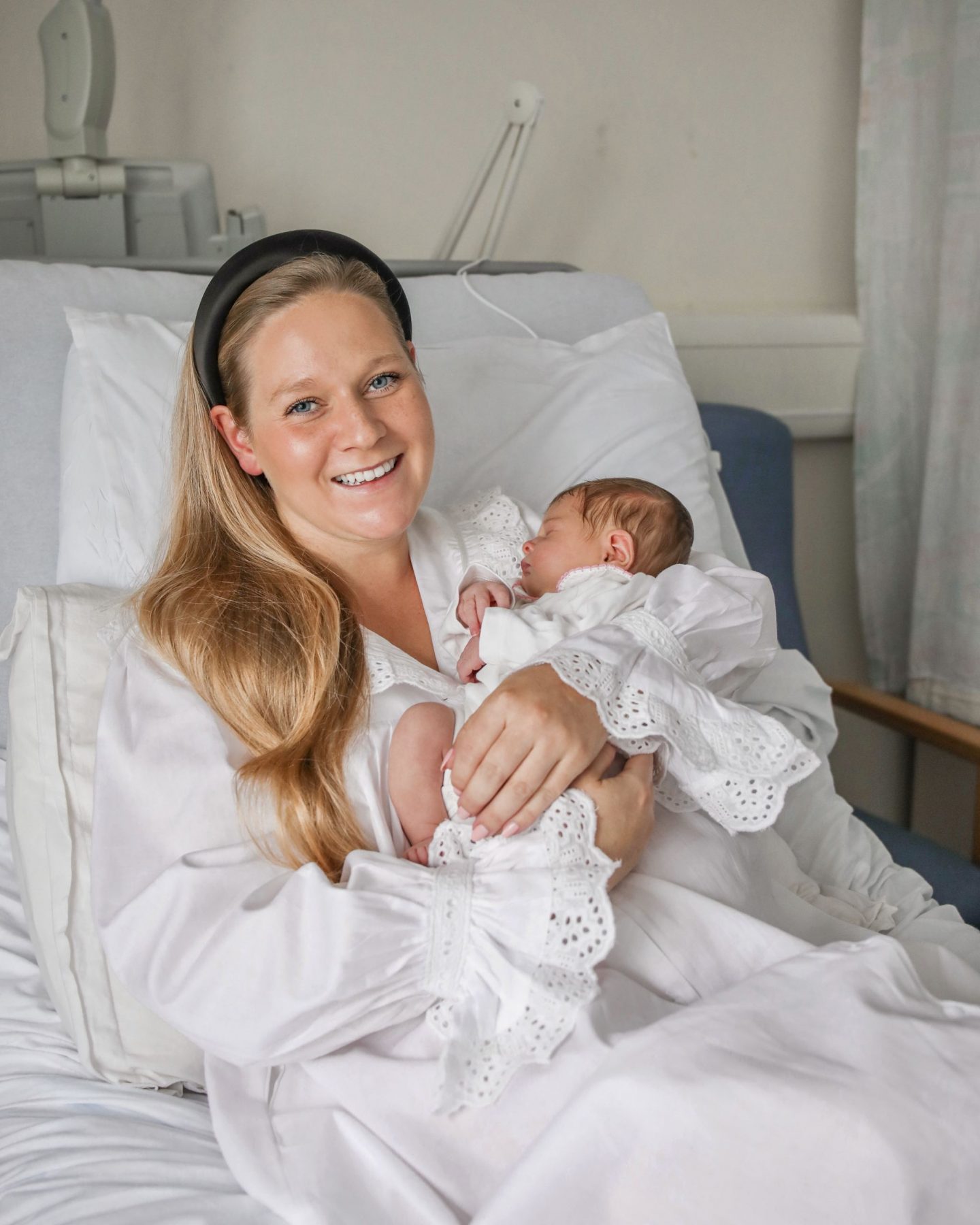 I was convinced our birth story would kick off two weeks early, ahead of baby girl’s due date on the 29th July. Instead, we had a long wait and booked in for a sweep on Saturday 7th August. I’ll save you the explanation of what a sweep is, but it seemed to do the trick as at 2am that night, contractions kicked in. I had called my mum to come over earlier that evening, just in case things progressed quickly! Contractions intensified on Sunday and were coming every ten minutes throughout the night. I was able to sleep between, but woke up to breathe through them.

I had another sweep booked in for Monday 9th, but decided things were progressing well and skipped it. That evening, I was getting really uncomfortable and we eventually called the hospital. We walked slowly across at 11.30pm, while my mum drove our luggage in the car next to us.

On arrival, we went straight into one of the birth suites with the birth pool and met the first lovely midwife that would be looking after us. At this point I was 2cm dilated. Not ‘active labour’. We had an induction booked in for 8am the next morning, so the midwife said we may as well stay over in the room. Contractions eased off massively on the walk over and came back a little overnight. But by morning the midwife wanted to proceed with the induction, so I had a pessary inserted. I had been really worried about the pessary. But it really wasn’t bad at all and helped kick the contractions off again. Both being completely exhausted, we took turns to nap. With me bouncing on the ball between, to try to get the baby to progress.

The pain started to really intensify again and I was already so tired from three nights of contractions every 10 or so minutes, so I asked for the pethidine injection. This massively helped ease off the pain and allowed me to get a few hours sleep. As it wore off though, the pain came right back again. I asked the midwife if there was anything else I could do and she suggested a bath. I actually never knew there were baths in hospital, so it was quite a nice surprise to have one there! Especially as they had electric candles to help create a calm and relaxed atmosphere. Ben came with me and played my hypnobirthing affirmations and a meditation for me. Although it initially helped, I was overwhelmed by the contractions again.

Back on the ward and time for another examination. By this point I think I was about 3cm dilated. As she finished her examination, I felt something below and thought the pessary had come out, but the midwife exclaimed that my waters had broken! 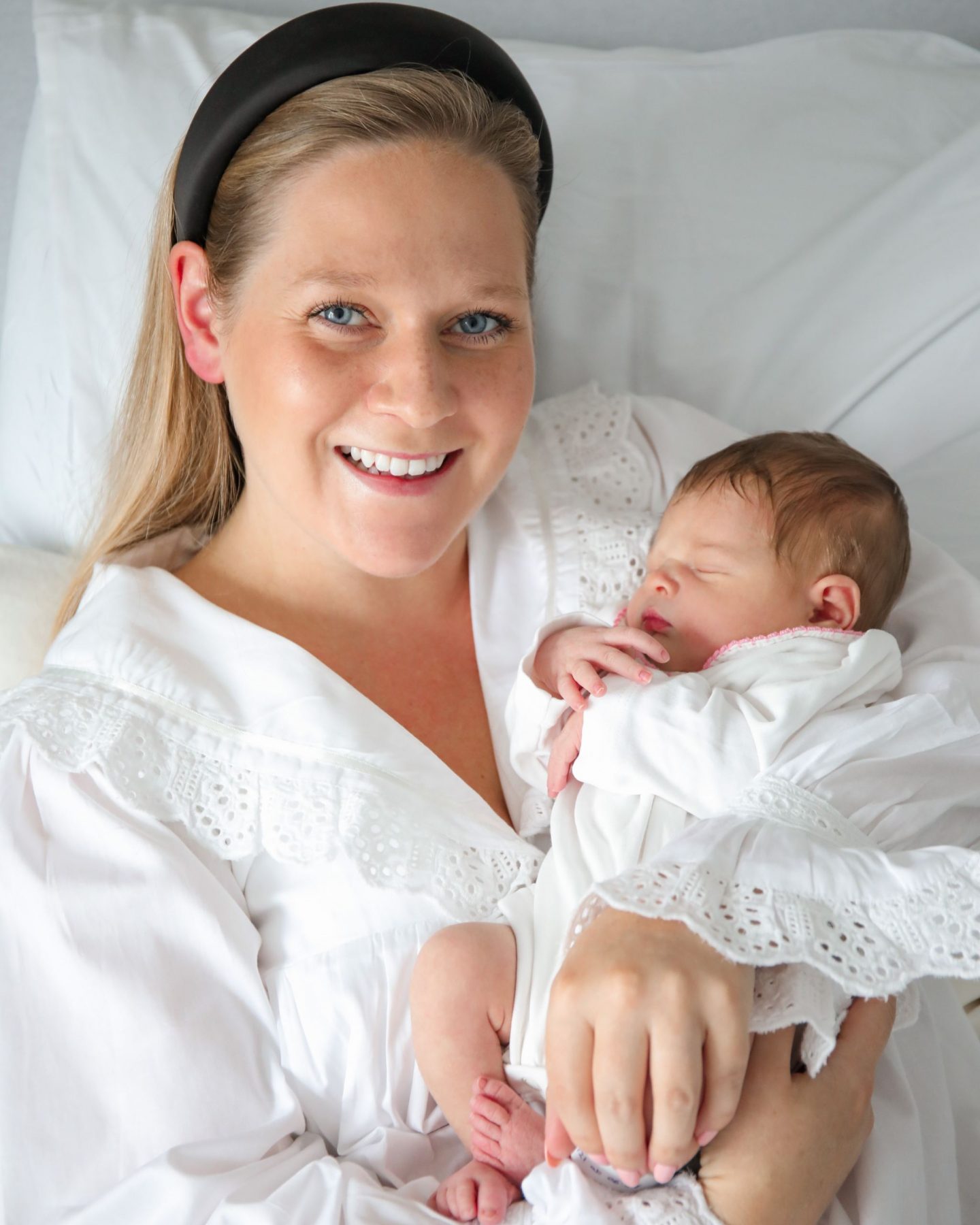 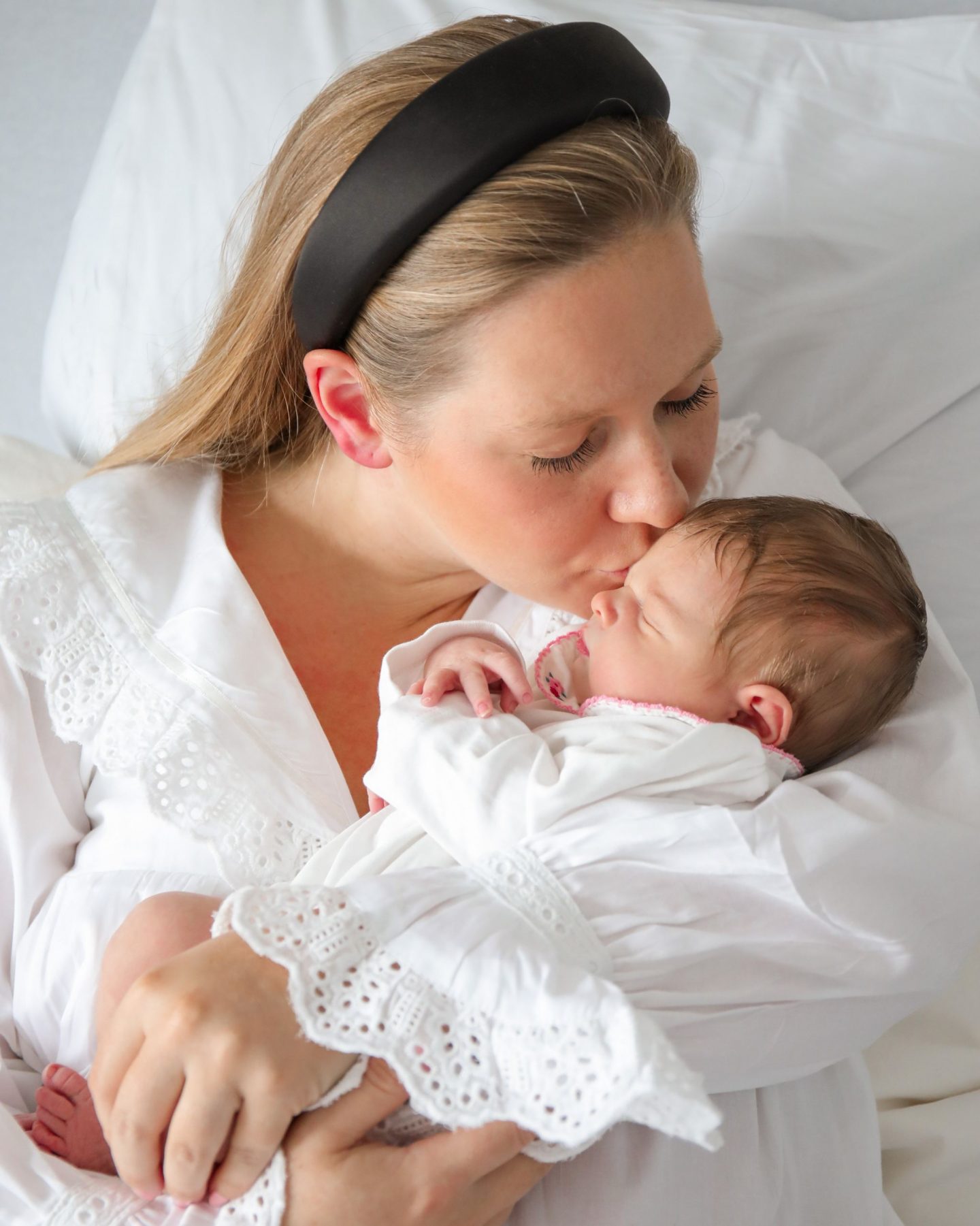 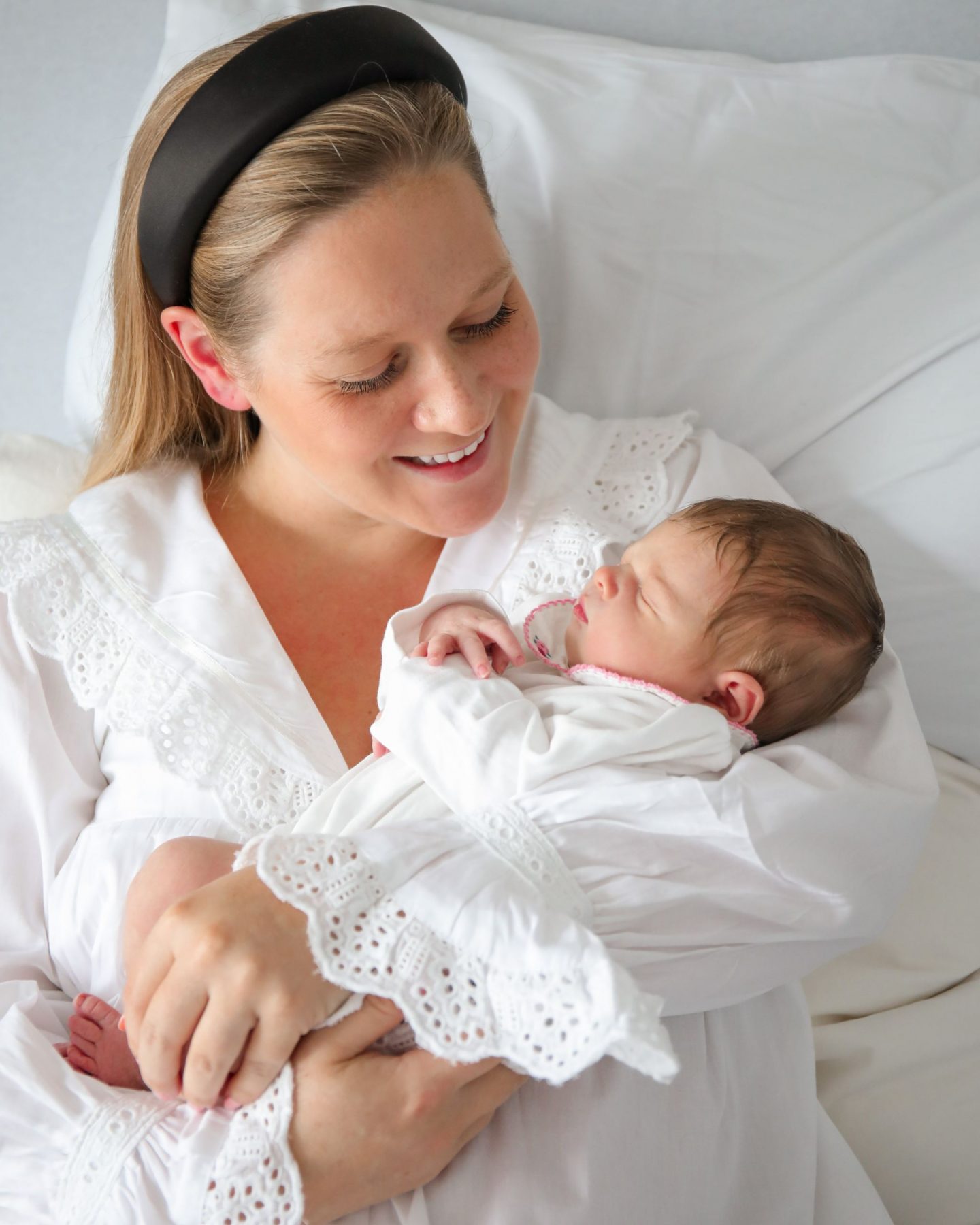 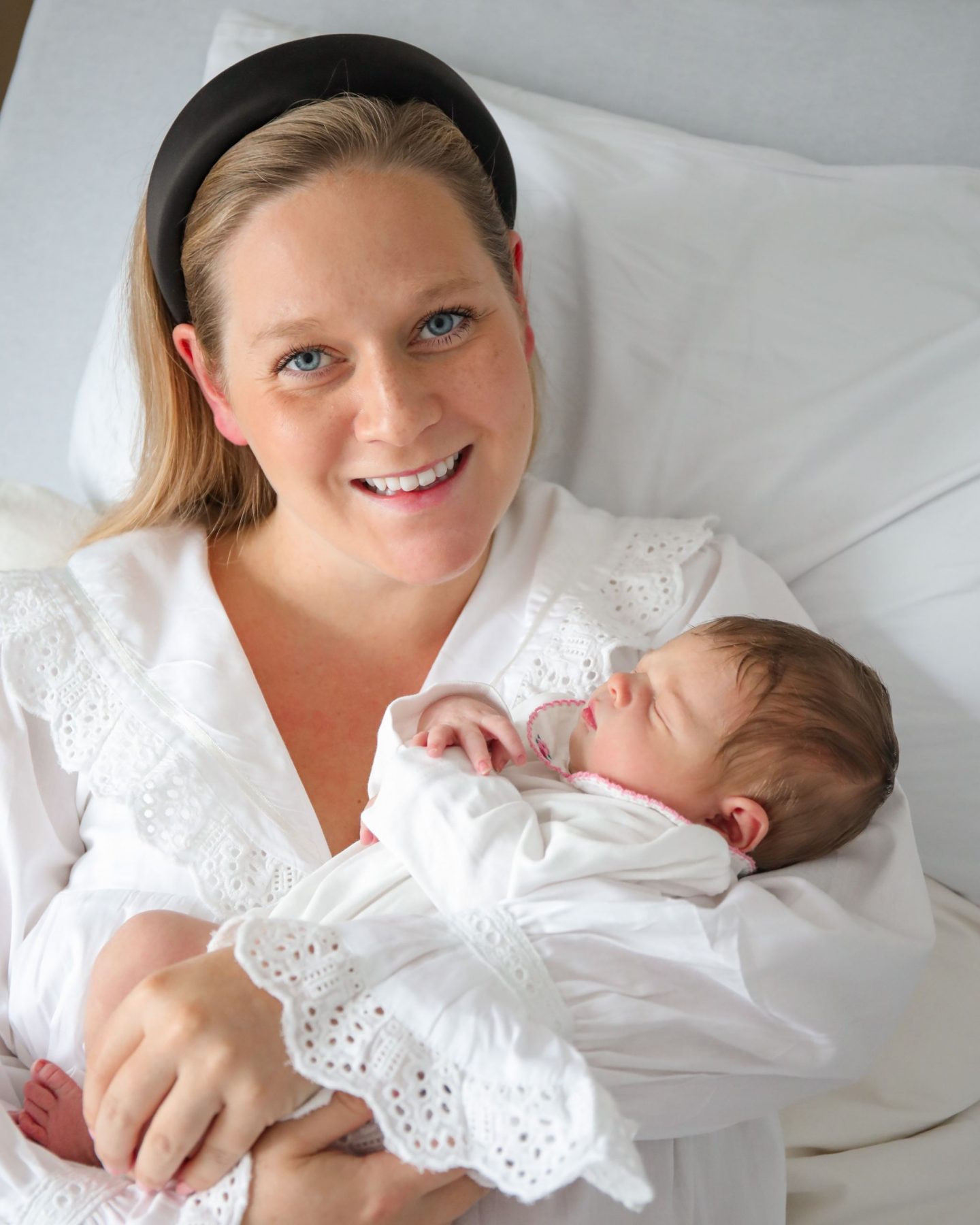 It was pretty much all go from there. As we had had to have the induction, we automatically jumped to a high risk birth. So our hopes of a water birth went down the drain. Instead, we walked to our room on the ward (incredibly spacious with a Jack and Jill bathroom to the room next door and a sofa for Ben to power nap on). I had a drip inserted, which fed in the hormones to kick off the contractions even more and was wired up with monitors checking my heart rate and the babies.

Being so wired up, plus the extreme exhaustion made it pretty difficult to move around and help the baby along. At some point I had another Pethedine injection, but this time it didn’t really do anything and I wasn’t able to get any sleep. Instead, we tried gas and air. I got along with it really well at the start. For it to be effective though, you have to take it just before a contraction, which I found difficult. In the end it was drying my mouth out too much, so I ditched it in favour of my own breathing.

We watched the hours roll by and at some point I ended up getting fed up of the waiting and got up to try and be active again. The problem was that every time I moved, the bands across my tummy couldn’t read our heart rates properly. Mine would rise as the babies would fall and when they crossed, the machine couldn’t tell which was which.

The midwife eventually explained that she was going to have to put a probe with a clip on the end inside me and attach it to the babies head to get an accurate read of the heart rate. I didn’t like the sound of this at all, but knew I didn’t have much choice. When the probe was on, the monitor showed that we had been right to worry. Where babies heart rate should be (at lowest) 120, it was dropping to 70.

By now I was hallucinating with lack of sleep. I can only explain it as though I was dreaming. Having conversations with people in the room that weren’t there. Telling Ben to ‘make sure my water was non-alcoholic for the baby’ and no longer in control of my body.

Not long after, I started to push. I had always thought this was something women actively did, but my body did it all. I was involuntarily pushing. It came in waves like the contractions.

I wasn’t finding the pushing too painful, but over time, my back had started to really hurt. Any position I got myself in made no difference. I was in the most pain I had been in during the whole birth process. My back was agony. At this point the midwife called a doctor to come and have a look and I had another examination.

It turns out that all that time on the bed had got baby comfy enough to flip over and she was now back to back with me. They watched a few pushes, then a few more calls were made and the room started to fill up. After a few more examinations and Ben getting more worried, they explained that it was taking too long. The babies heart rate was too low, I was too exhausted and she needed to come out asap. 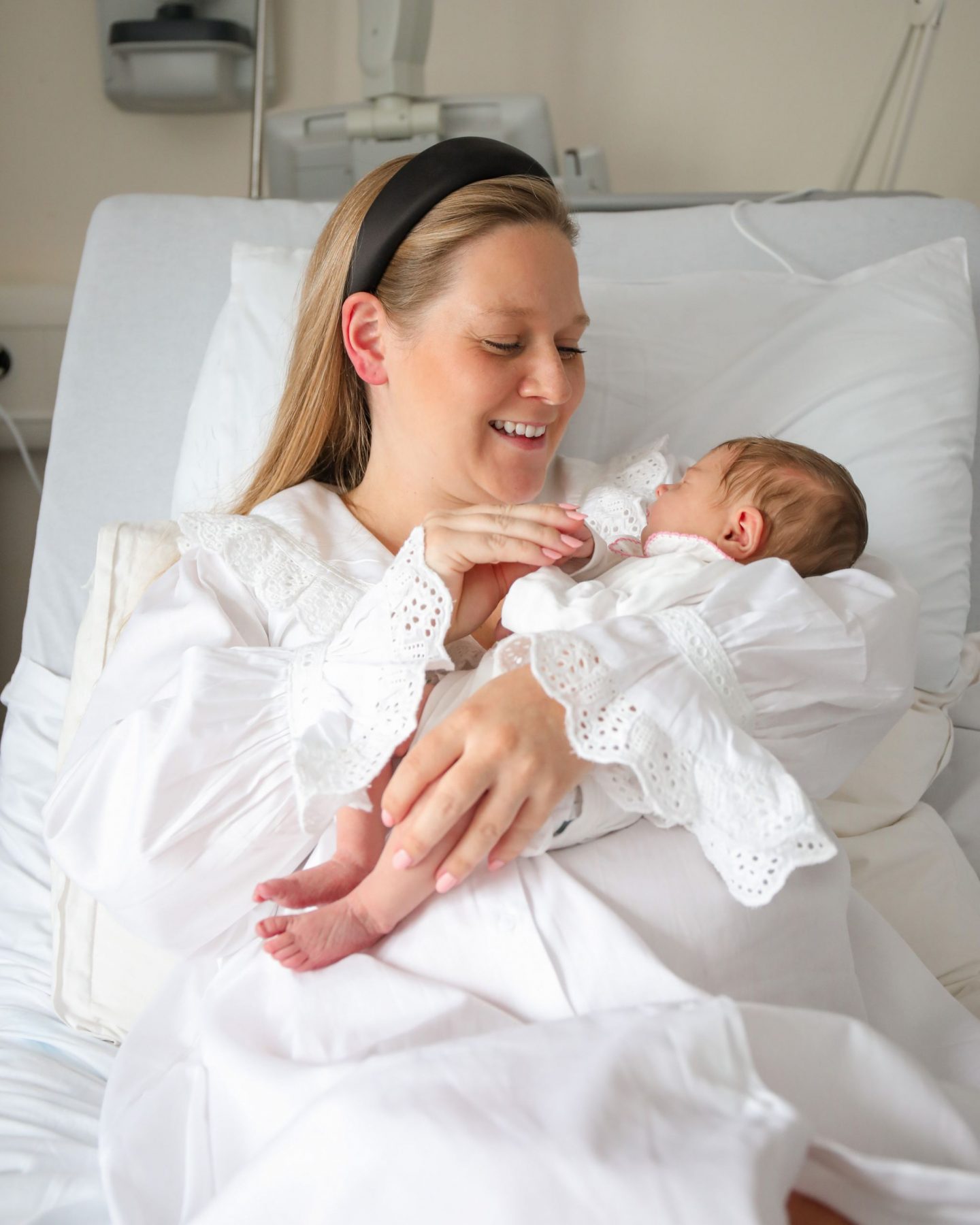 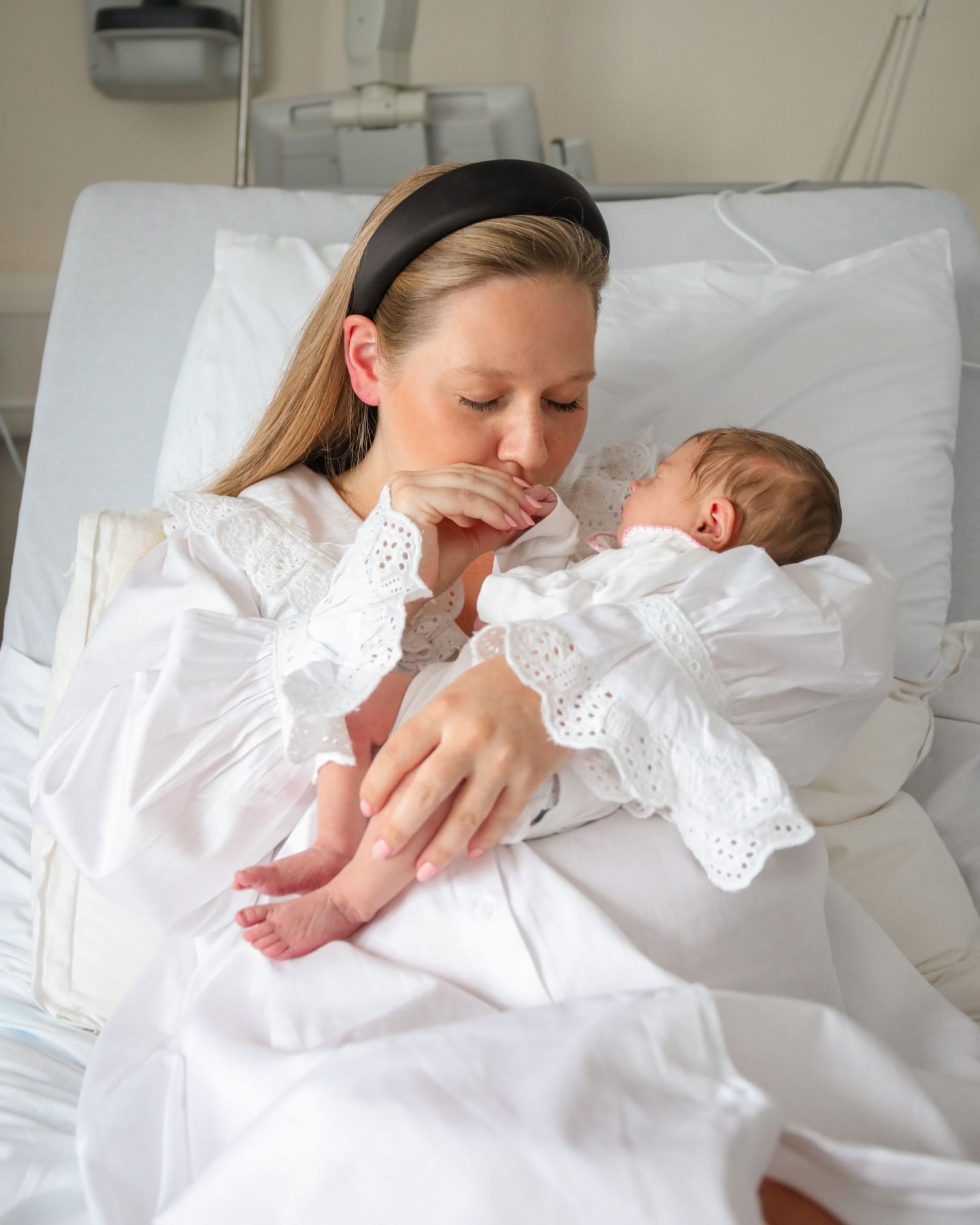 Suddenly the room filled up with people. Wires were detached and attached to me, Ben was bundled into a surgical gown and then I was being wheeled through the corridors. The contrast between the quiet of our birth suite, to the surgery room was unreal. People were everywhere. Shouting off checklists across the room to each other. The lights were so bright and I was moved onto the surgeons table.

I was told by the anaesthetist to hold still as he applied a numbing gel to my back before injecting the spinal block. Made harder when an involuntary set of pushes happened! An ice cube was run up each side of my body as I confirmed I couldn’t feel anything.

The female doctor tried to manipulate the baby to flip the right way. I was told to push down (so much harder than it sounds when you can’t feel your muscles) but baby wouldn’t budge.

If the room was busy before, it was nothing on what happened next. The doctor and the surgeon had a quick conversation before the surgeon announced to the room ‘we have maximum ten minutes to get this baby out’. The pace was amplified, voices got louder, surgical instruments were wheeled about. People introduced themselves. Somewhere along the process I was handed an iPad to sign with the risks of the procedure. We were having a C section. Ben throughout all of this was right by my side as I drifted in and out of consciousness.  With that, the blue surgical screen was raised up under my chin and the room got to work on our baby girl.

‘Hello baby!’ a voice called from somewhere behind the screen. I can’t remember hearing a cry, and in films the baby always cries. Worried something was wrong, until finally another voice; ‘Does Dad want to come and meet his daughter?’ I felt myself totally relax and I think I might have even drifted off for a few seconds. Our little girl was born at 6.57am on Wednesday 11th August 2021. 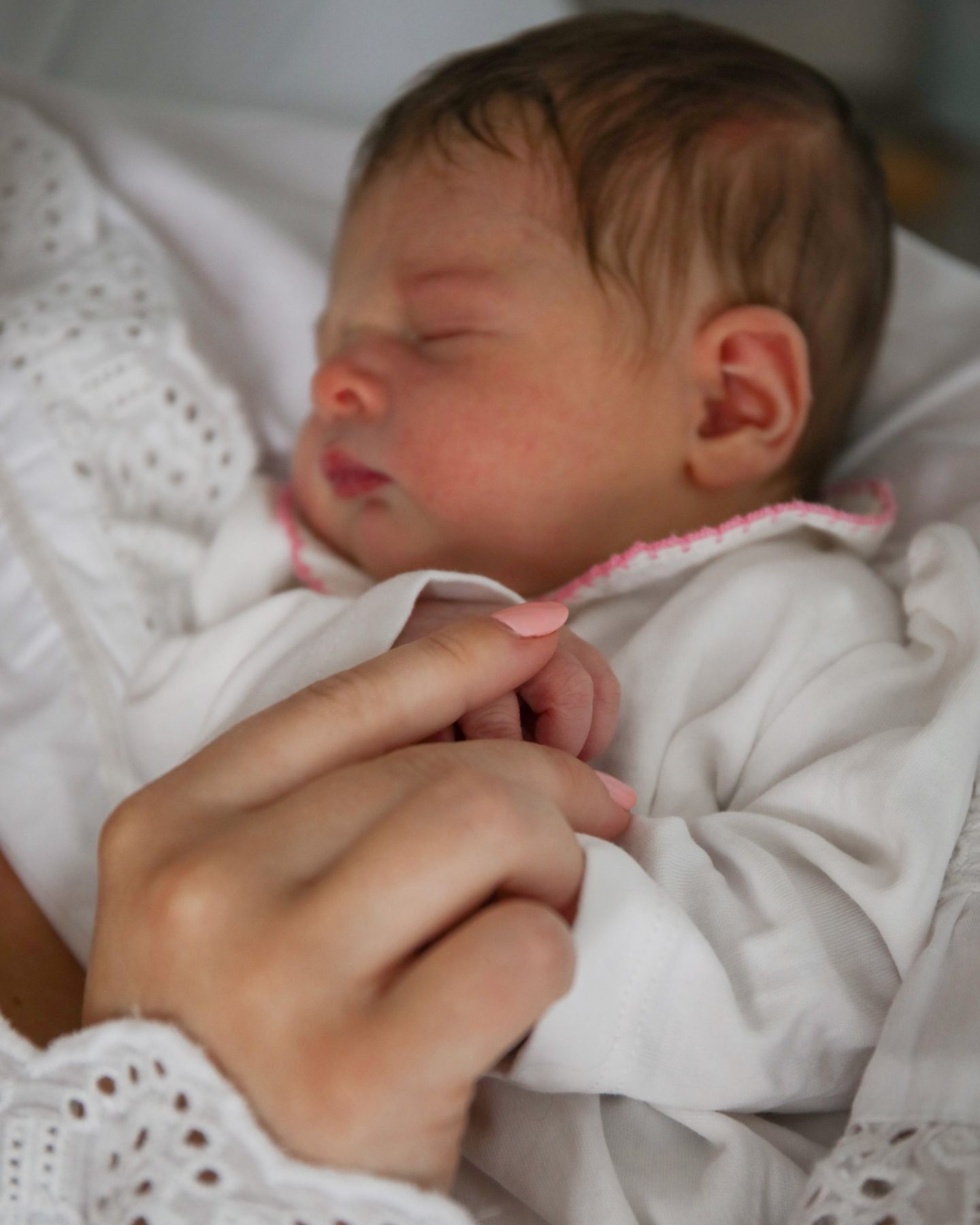 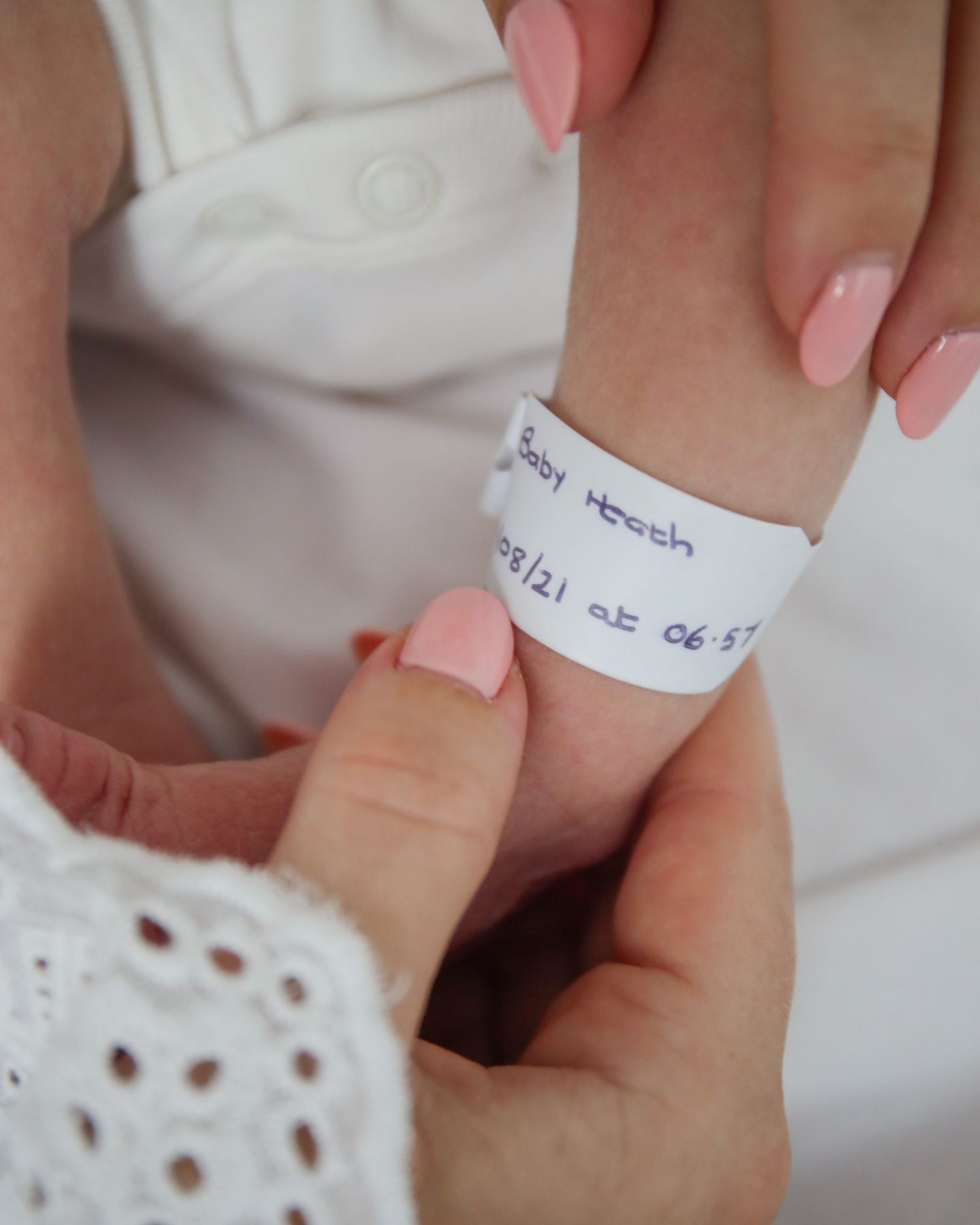 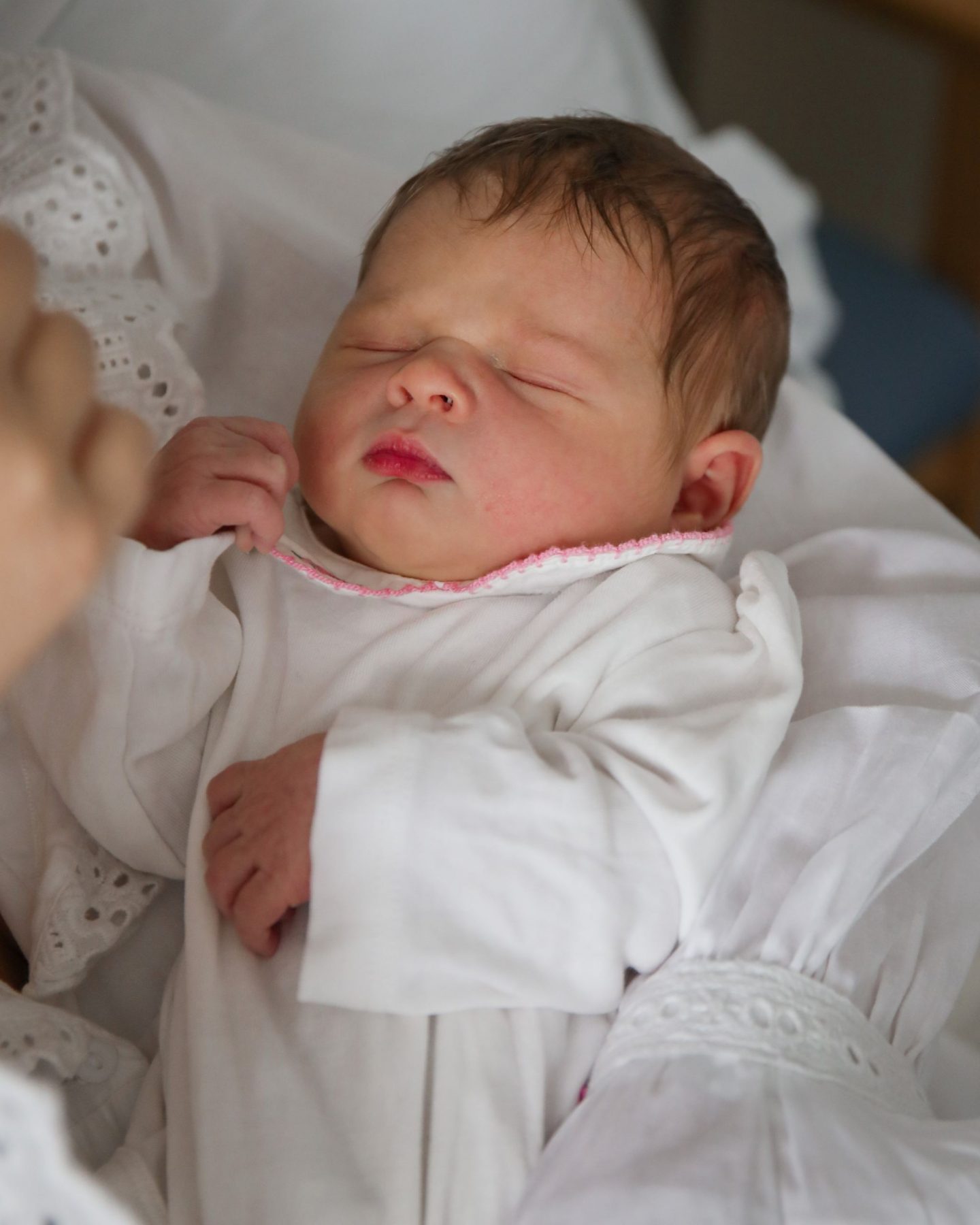 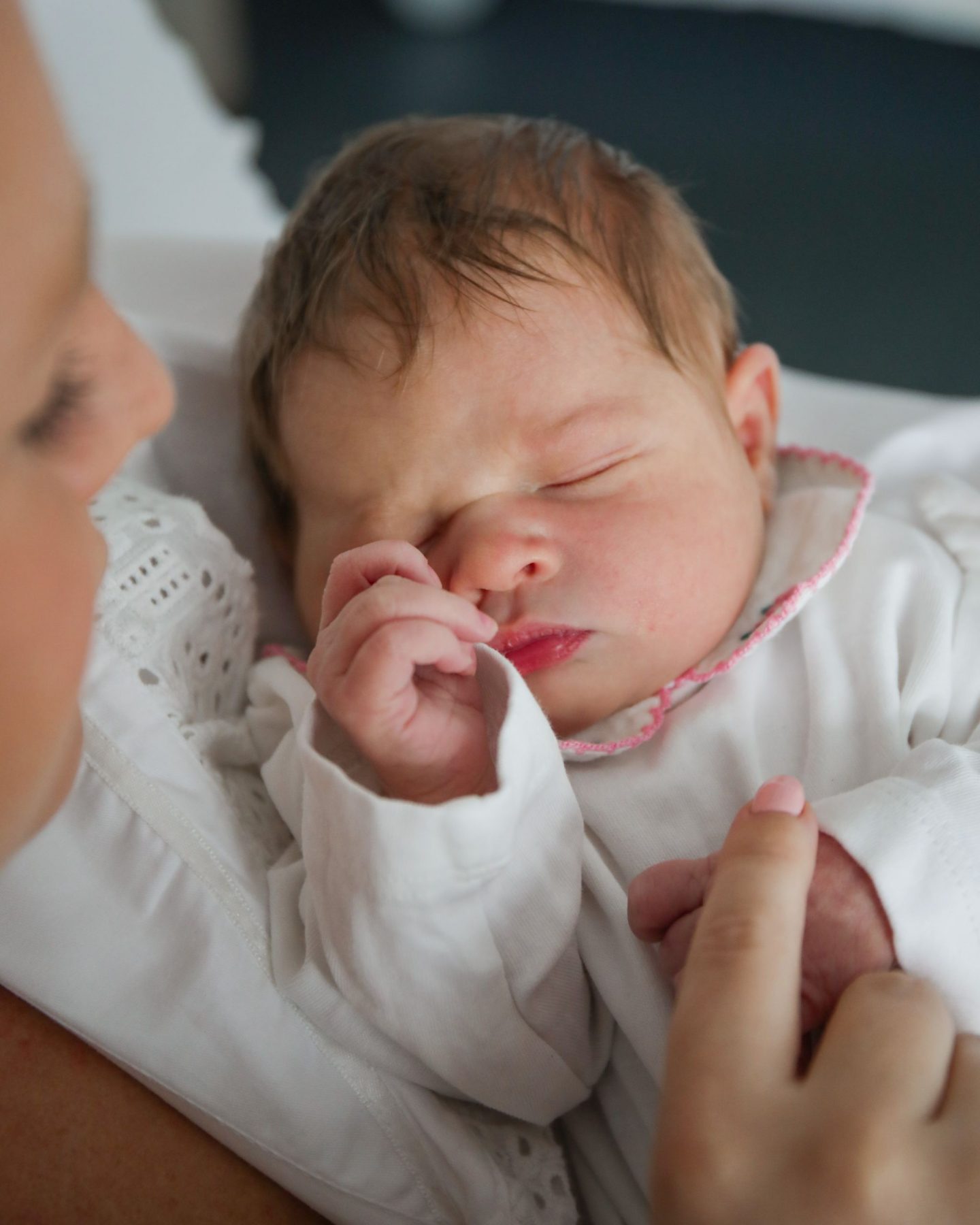 To my right, the midwife appeared holding a squirming naked pink baby with a full head of hair. Our little girl was placed on the scales (3.46kg) and the sound of her screams filled the room. It was the best thing I’d ever heard.

A face appeared over the top of the screen ‘Just to let you know, the surgery has gone well and we’re going to start stitching you back up now. I’m not sure if you were aware. There was a 6cm cyst on your ovaries that we’ve whipped out too’. I thanked the female surgeon and turned my attention back to the baby that Ben was now holding.

Another face and another voice ‘Because of the complications with the birth, we’re going to have to take the baby to Neonatal and run some tests’. The midwife explained that the tests would take six hours. I was so exhausted and overwhelmed that I barely heard what they were saying. I was moved from the surgeons table onto a hospital bed. My baby girl was finally placed on my chest under a blanket. Wheeled back to the room, staring at this tiny little human, before everything got busy again. The midwife tried to help me feed, but time was up and as quickly as she had been placed on my chest, the baby was whisked away again. Off for her tests. Ben was to go with the baby and I was to try and recover.

My recovery midwife/nurse brought me a cup of tea and some toast of which I managed one slice and half the cup. For the first time, I was completely alone. My head hit the pillow and I drifted off into the deepest sleep.

I woke a few hours later and my nurse helped me brush my teeth and hair and put on a clean t shirt. When I was ready, I was wheeled over to Neonatal where my little girl had wires coming out of her head and chest. It was the first time the three of us had been on our own and we soaked up the moment.

A few hours later and Ophelia was given a clean bill of health and we had the all clear to be taken back to the ward. We stayed in hospital for two more nights, after the birth, under the watchful eyes of the midwives. Before finally coming home on 13th August. 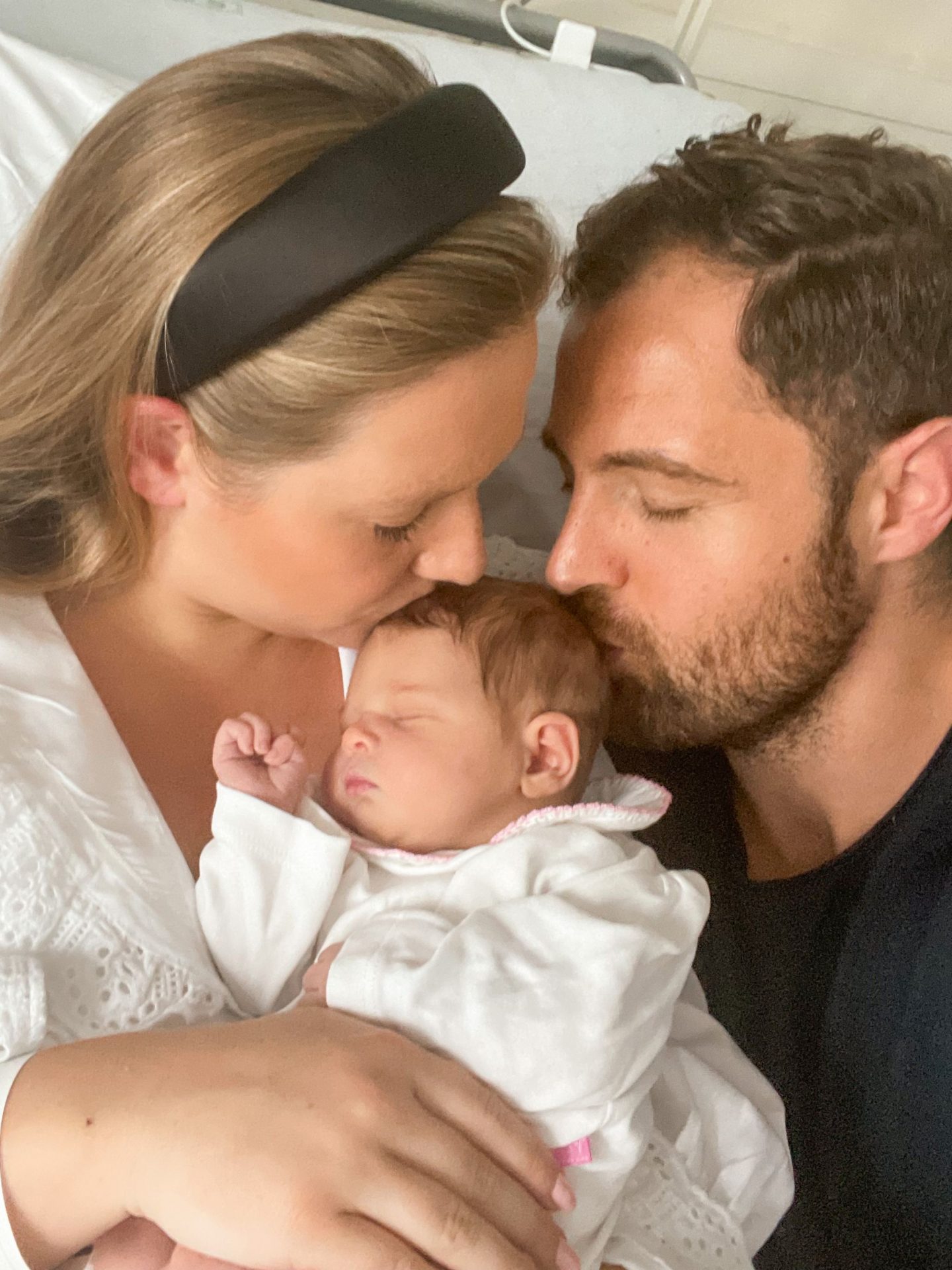 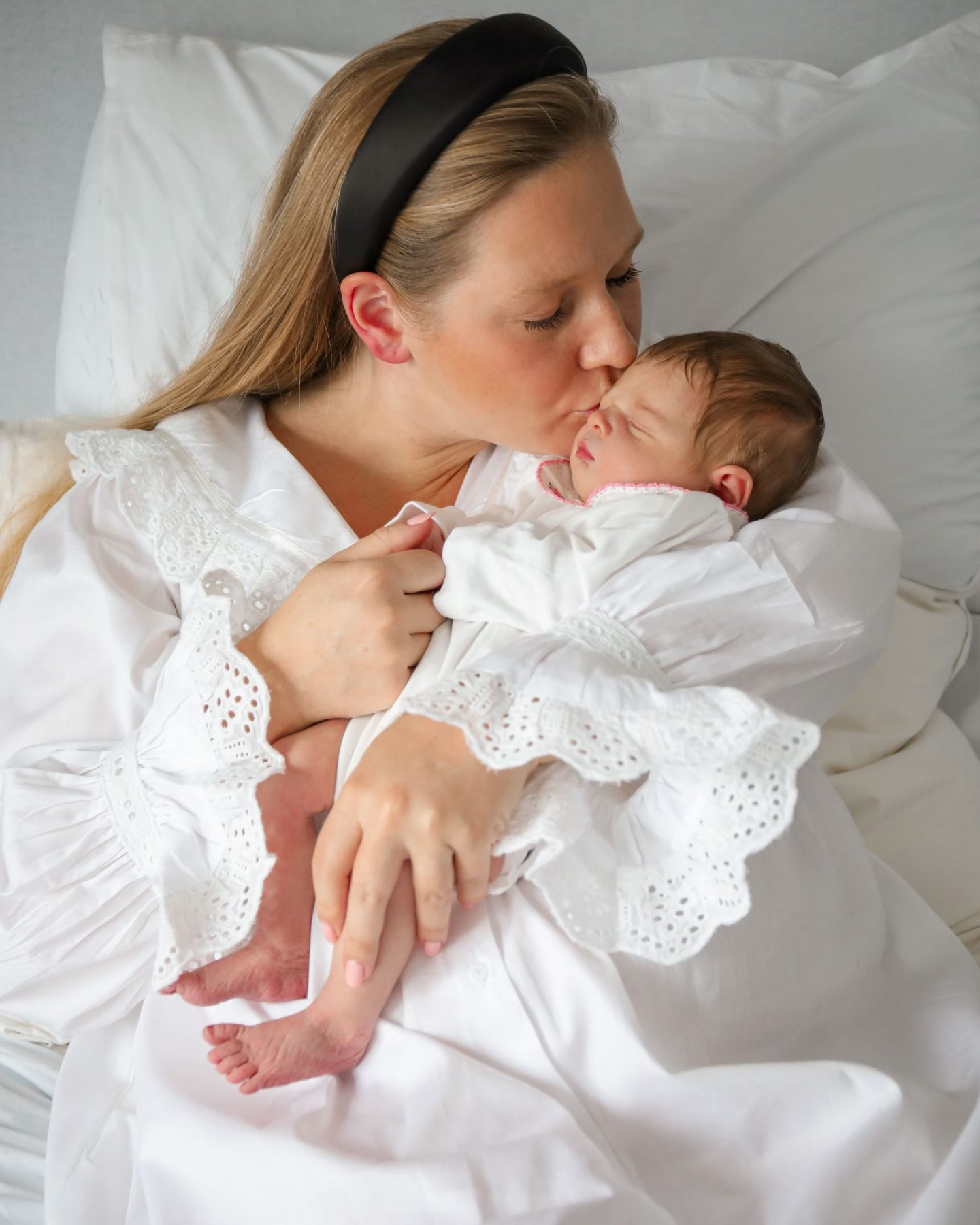 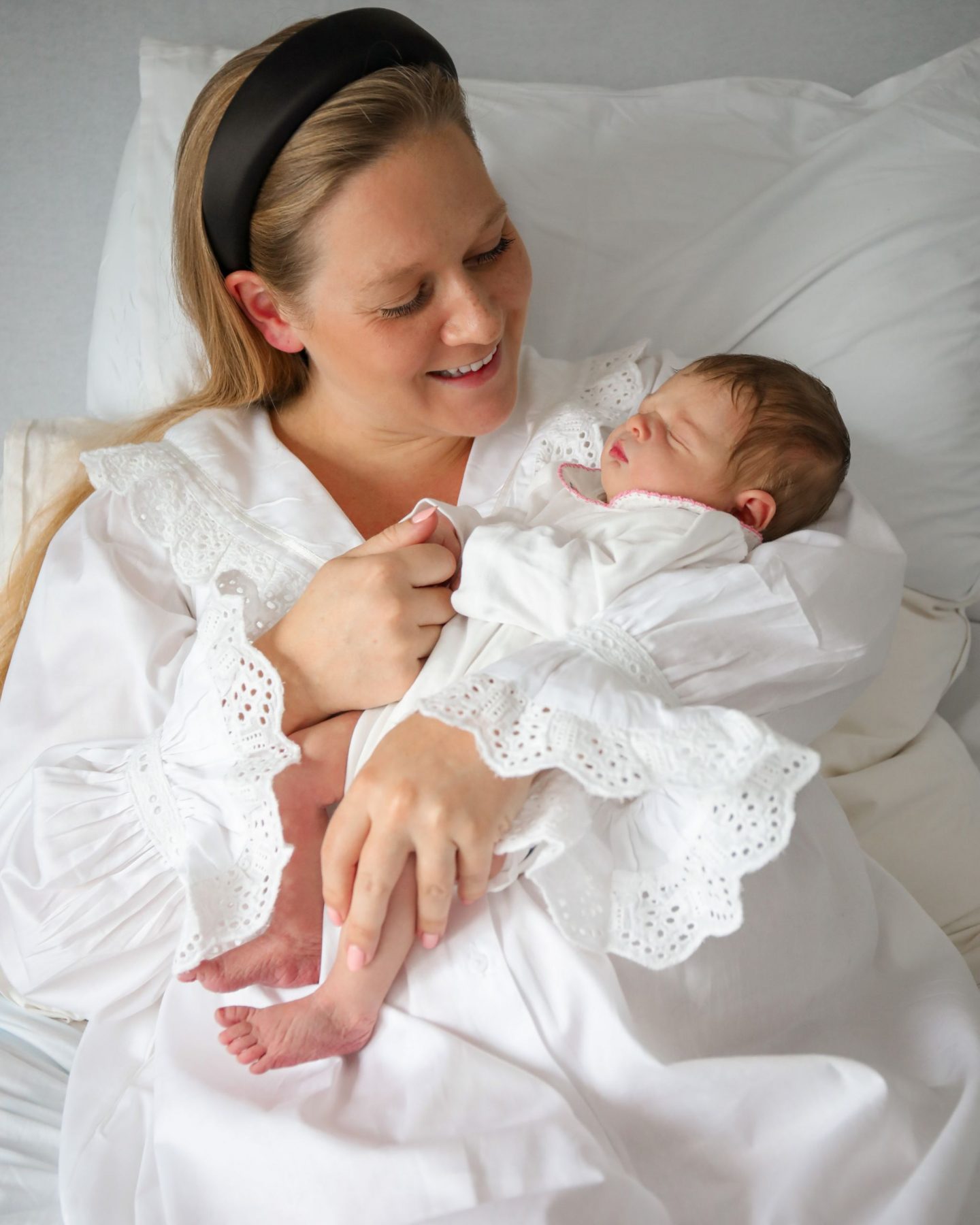