Shooting is a massive countryside Tradition in Britain. There are a lot of people that do not agree with it, but personally I can’t think of a meat I’d like to eat more, than an animal that has lived a full and happy life in the wild.

Side note – There will be images of dead birds and guns in this post . If this is something you are not comfortable seeing, I suggest you do not read on so as not to be offended. 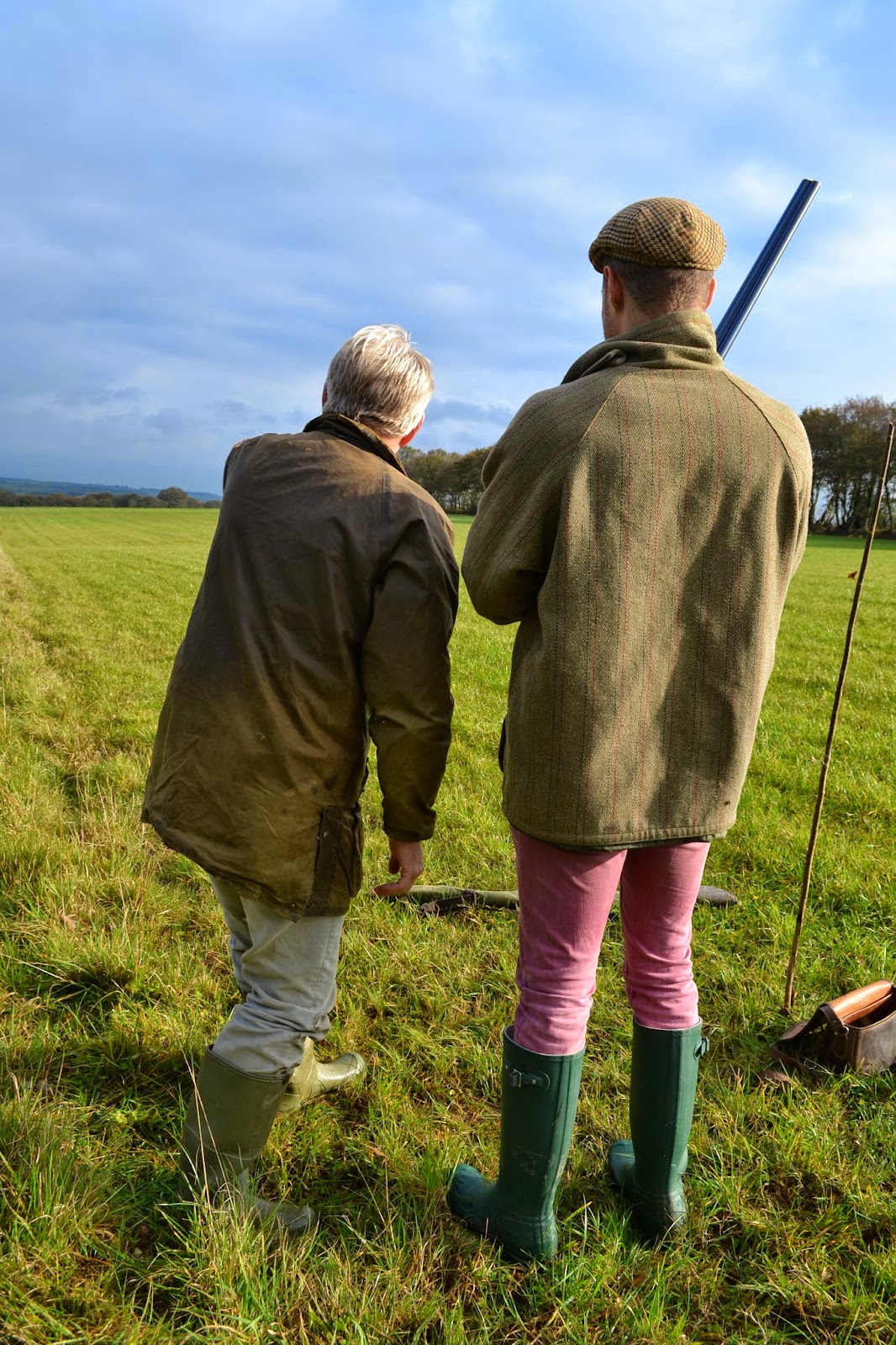 My Dad very kindly invited The Gentleman and I on a shoot with him and my brother and it was something we had been looking forward to for a long time. A chance for Ben and my Dad to spend some proper time together and a first time experience for Ben.

We were blessed with a beautiful day of blue sky and sunshine. It was so warm that Barbour Jackets were flung onto the hay bales on the trailer, and shirt sleeves were rolled up. 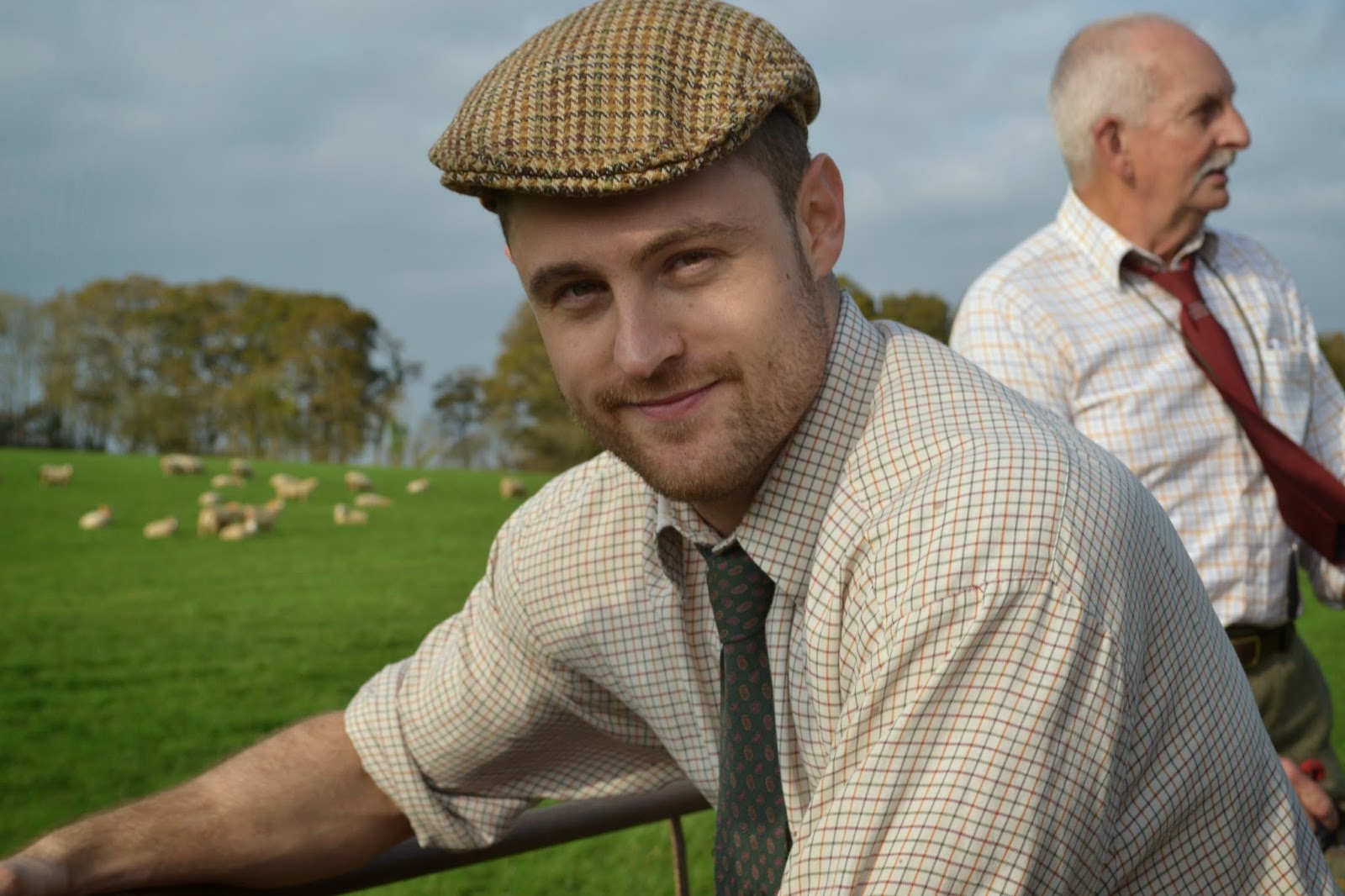 A traditional Shoot has a group of Guns and Beaters. The Guns are each allocated a position marked by a stick pushed into the ground. This is where they must remain from the start of the horn, until it is blown again at the end of the beat. Each shoot lasts about 10 minutes, and then the positions are reversed.

The Guns are prohibited from shooting any ground game (Rabbits, Deer, Squirrels, etc) and are only allowed to shoot birds that have clear sky behind them (to ensure the safe practice of guns). The Guns are allowed to shoot Pheasants, Duck, Pigeon and Woodcock dependent on the season. The Beaters job is to position themselves in a line and walk through the Woods, Hedgerow and undergrowth. They ‘beat’ the bushes, shouting loudly and generally making a racket to flush the birds into the air towards the guns.

When the Beaters have finished their drive, the horn blows and the guns are broken. The dogs are then allowed to retrieve the birds. 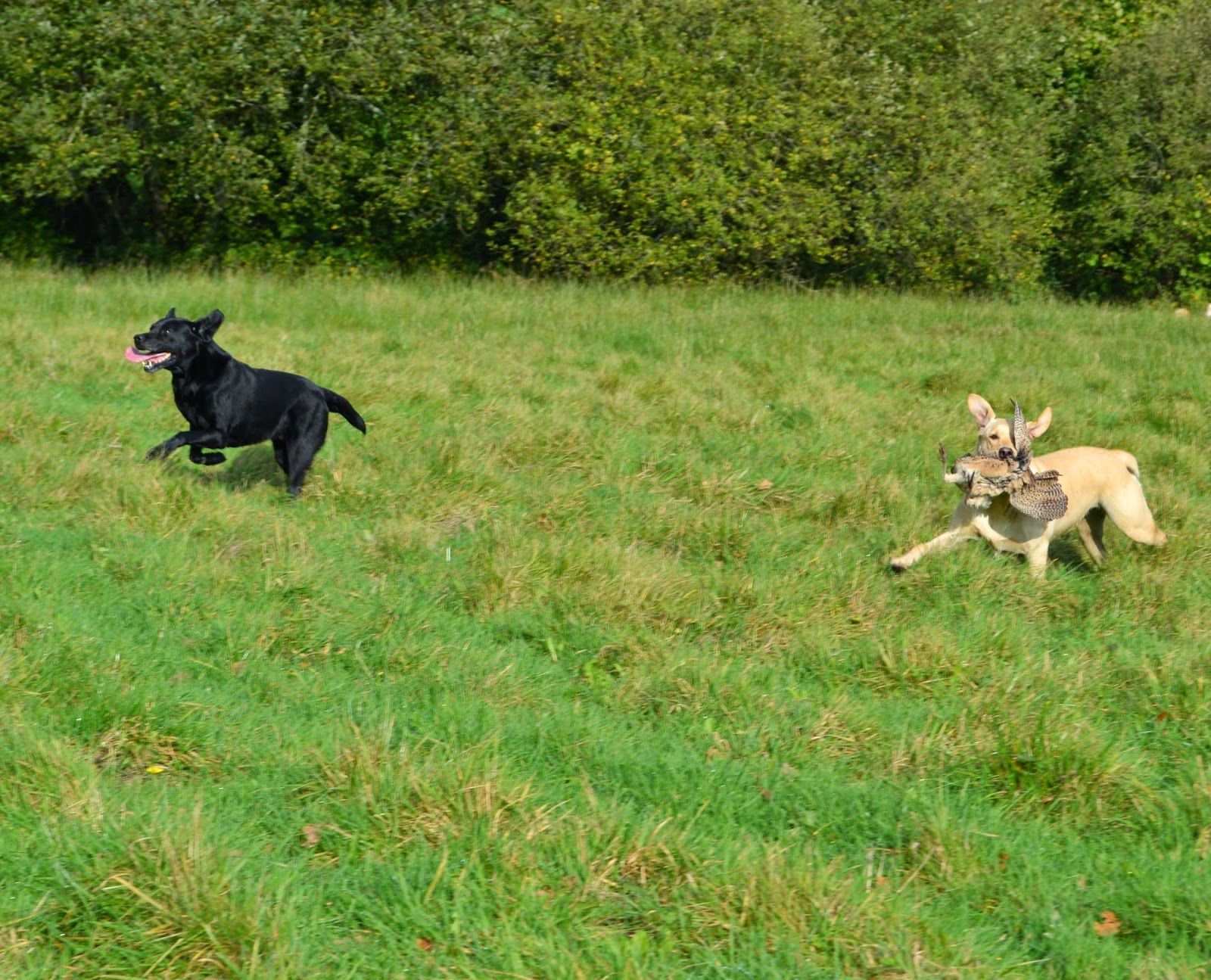 There is truly nothing like a Gun dog’s adoration for his owner and the bond between dog and human is really emphasised when you’re on a shoot. The dogs patiently wait, sitting by their owners side while the guns go off.  They do not move until they are told to do so, and race off to collect the birds. Even then, they bring the birds straight back and drop them at their masters feet.

The dogs are trained from a young age to retrieve the birds with a soft mouth. They never pierce the flesh or eat the birds (unless they are poorly trained) I’ve even witnessed our spaniels carry eggs in their mouths before without even scratching them. 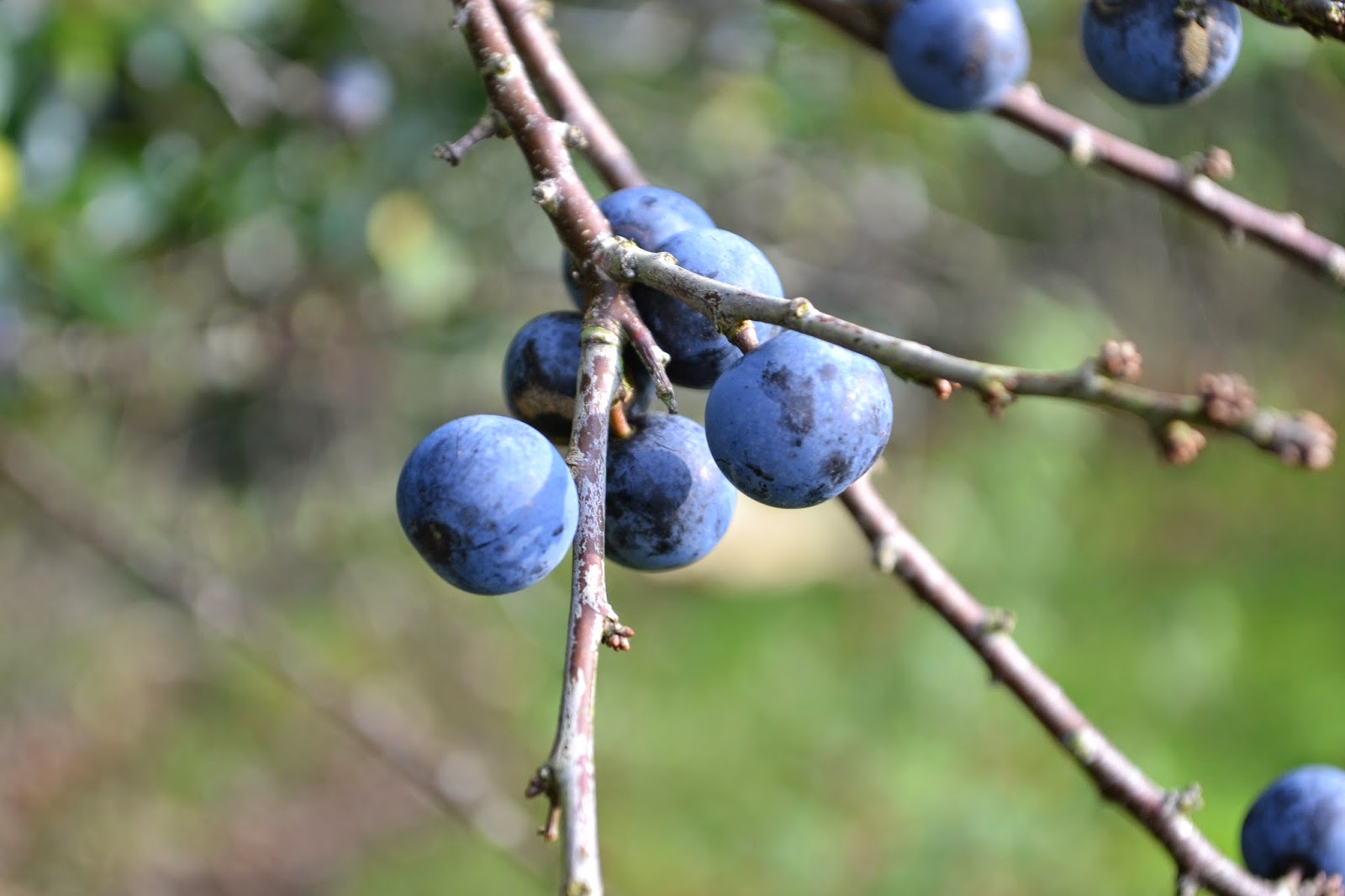 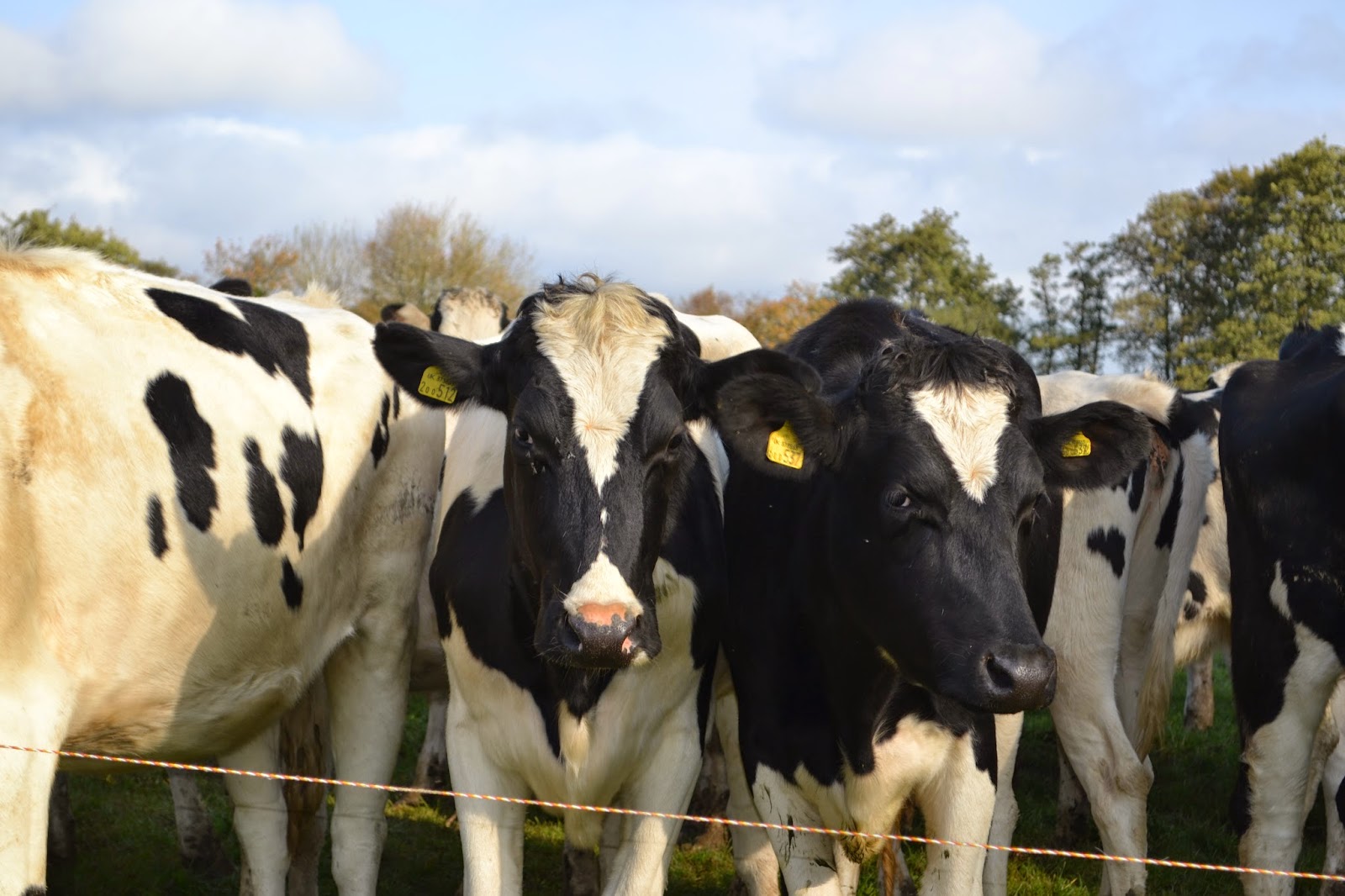 My Dad stood by The Gentleman’s side throughout the whole shoot, and I was so proud that it lead to Ben shooting his first Pheasant!

Although the excitement was short lived when the Pheasant awkwardly got stuck at the top of a tree. Unfortunately, we ended up having to leave the Pheasant after 30 minutes of trying to get it down. It was such a shame that we had to leave a perfectly good bird, but there was a bit of comfort in the fact that there are a lot of Buzzards in the area and it would provide a very welcome meal for one.

At the end of the shoot, the birds are laid out so that everyone can take their share. I’m pleased to say that I have never been on a shoot where the birds have not all been taken. Although I know that on some shoots (almost always near to large Cities may I add) they bury the birds because there are so many.

Where I’m from, we would never kill for fun and the birds are always eaten. We took a bunch of Pheasants home with us and my brother; Ruairidh even managed to shoot a Woodcock (notoriously difficult to hit as they are such nimble birds) although he gave this to a young boy on the shoot.

The night after (you need to leave the birds to hang for a little while before you eat them) my mother cooked up a delicious supper of Pheasant Pie and not a scrap was wasted.