There are two things you must know how to do if you want to impress in British Society;

Thankfully, I can do both of these. But there are so many things to cross off my bucket list – which is constantly growing and developing.

Is it imperative to ride a camel to impress Moroccan society?

Irrelevant, I’ve wanted to ride one for years!! 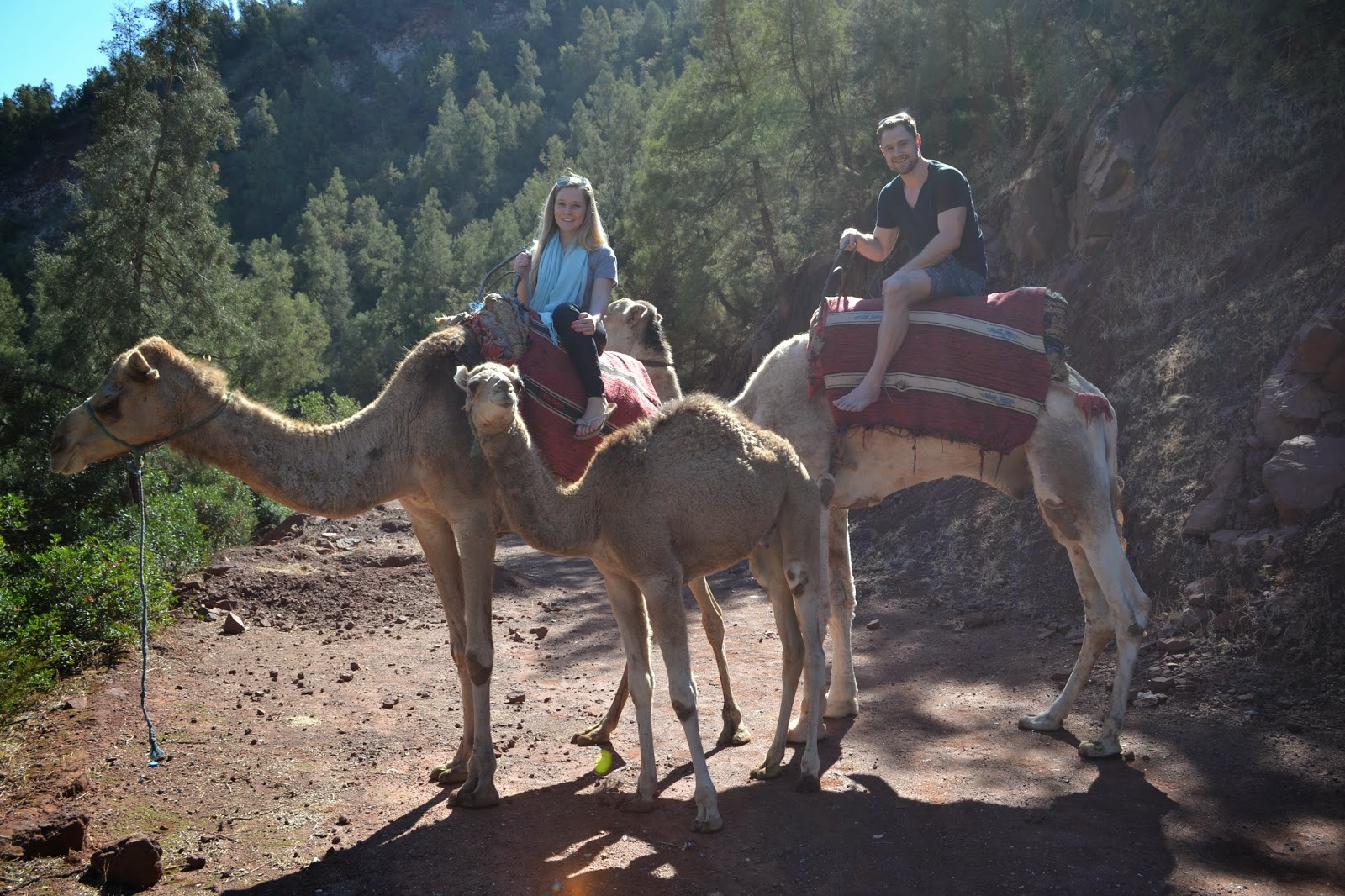 A camel, to me, has always seemed like an incredibly exotic animal. Mainly found in the pages of my childhood books or the Indiana Jones films. Long-Legged, hump backed, eyelash batting creatures with huge padded feet. 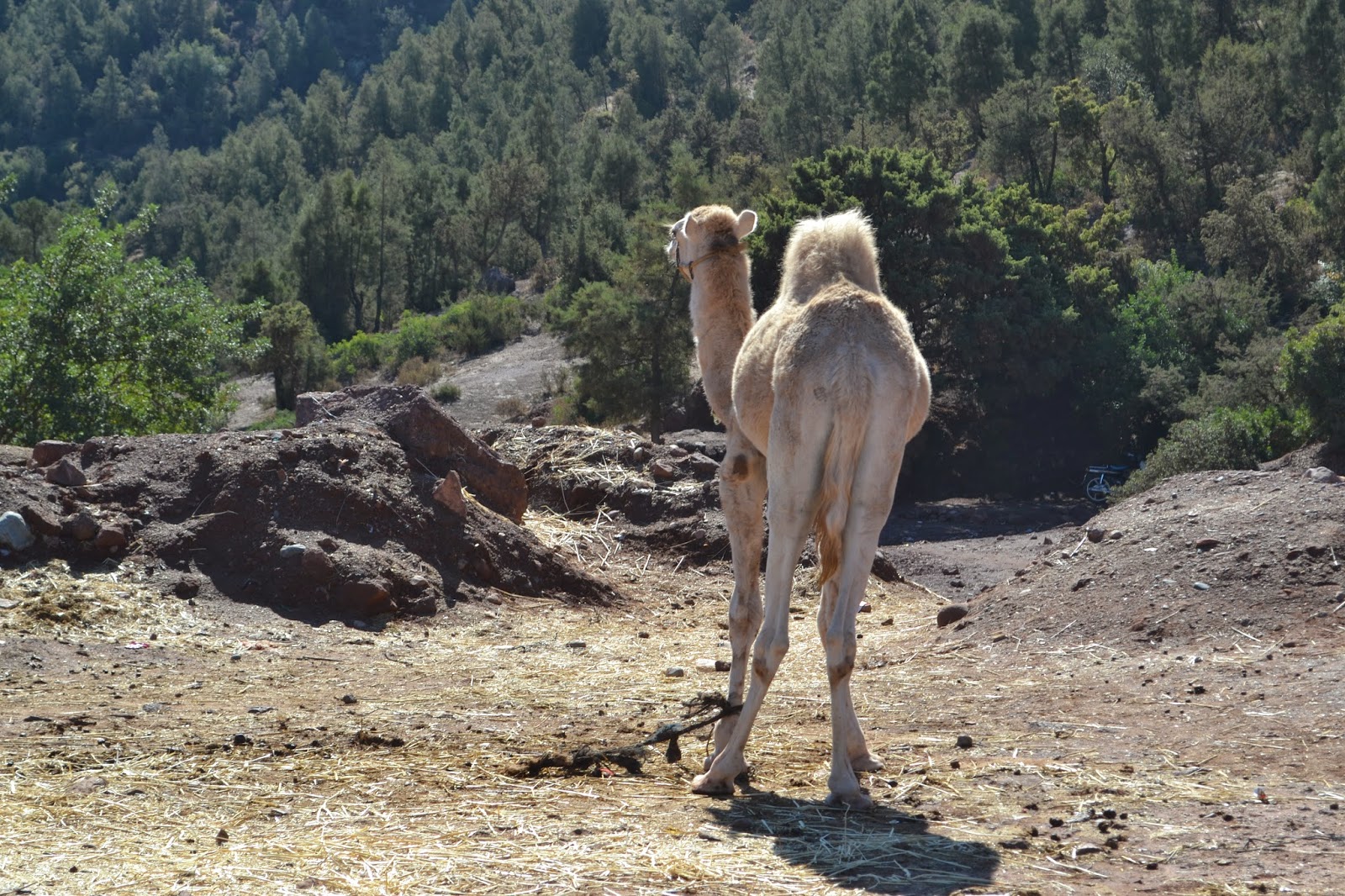 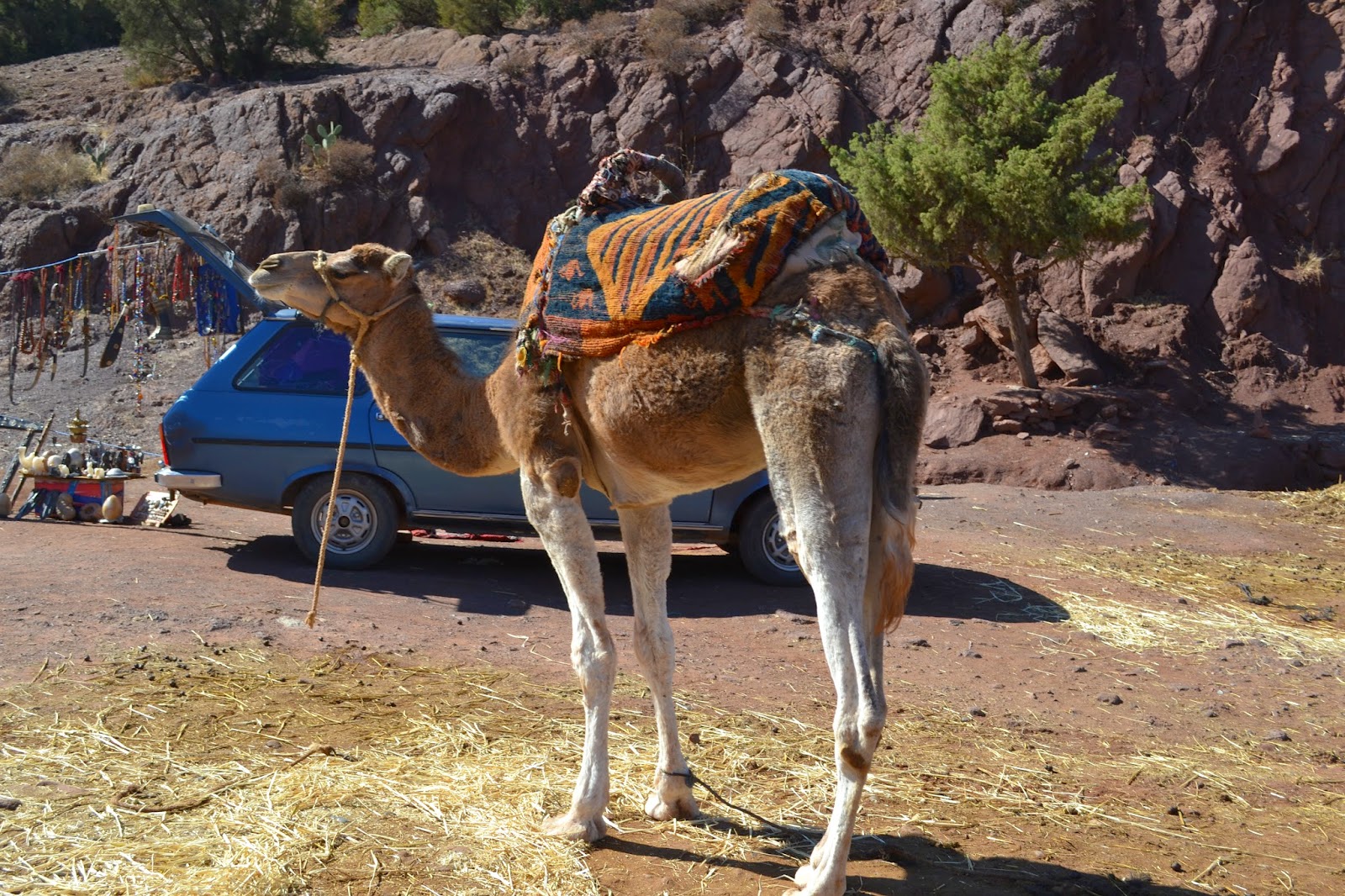 Everyone I’ve ever spoken to about Camels have said they’re smelly, dirty, spitting creatures. But I always thought they were beautiful and majestic. I had said to The Gentleman that the one thing I wanted to do while on holiday was ride a camel and he promised me we would.

When we took a day trip to The Atlas Mountains, the taxi driver pulled over at the side of the road and we piled out. I smiled so broadly, I thought my jaw may not be able to handle it. 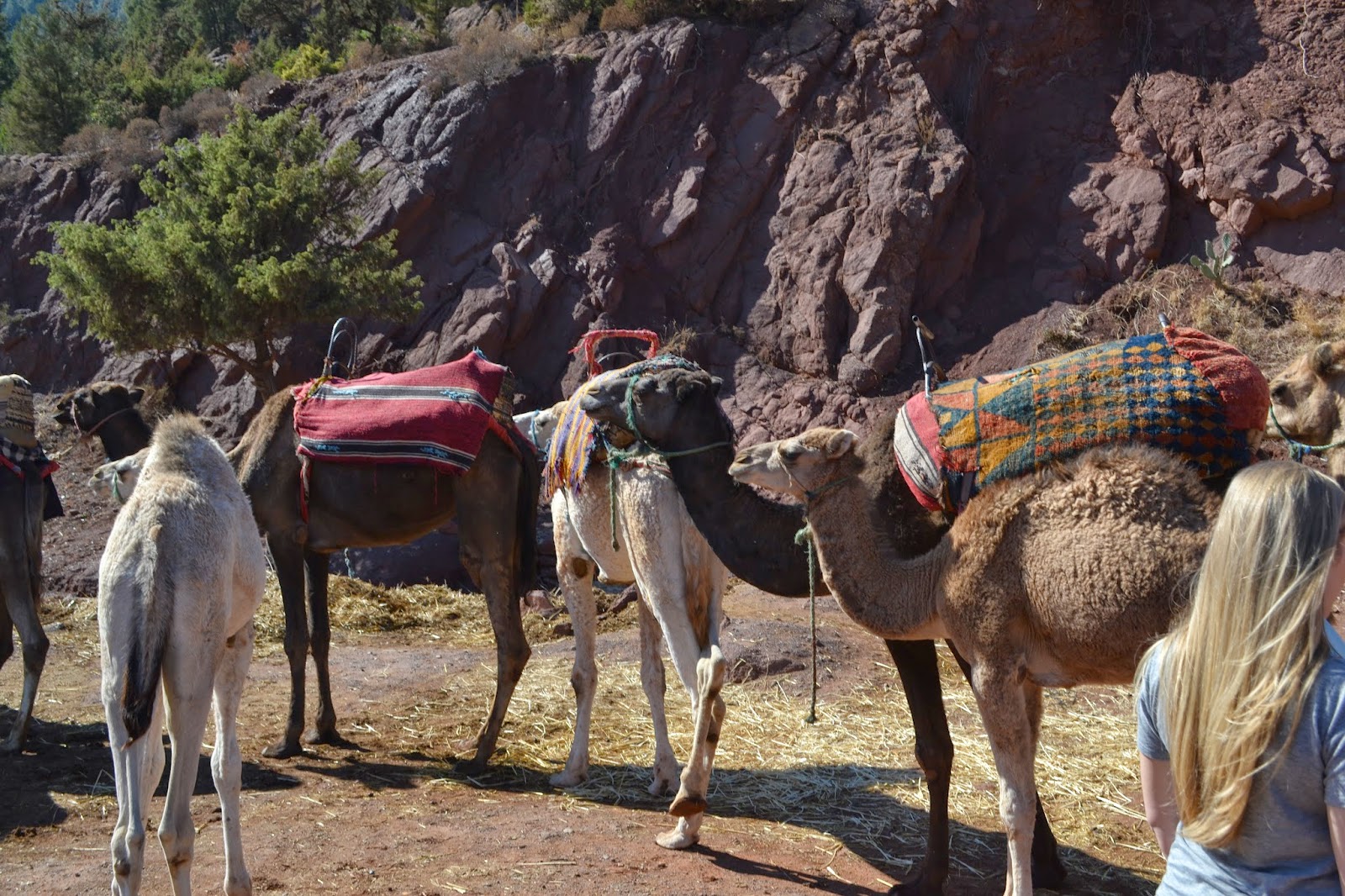 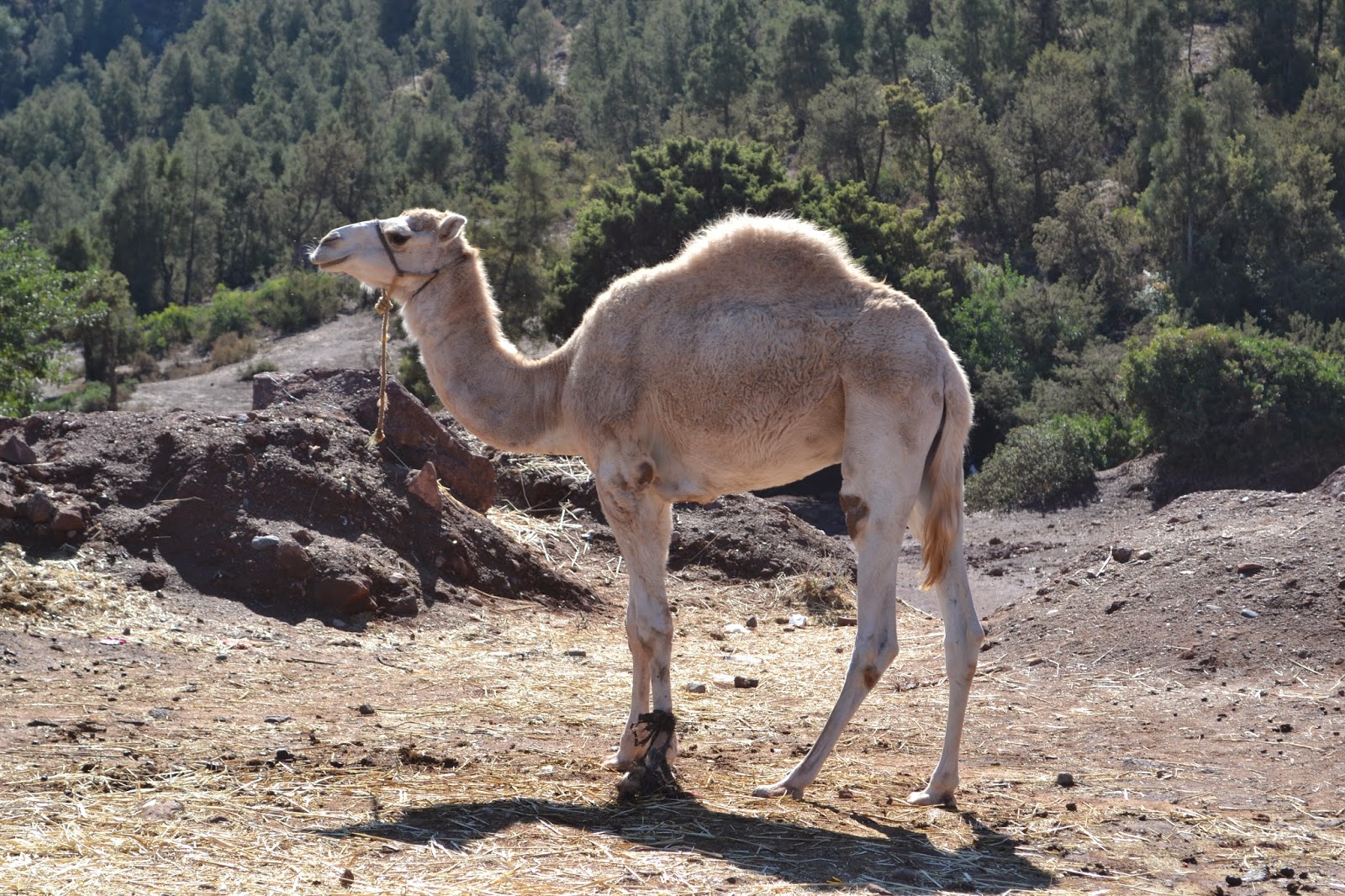 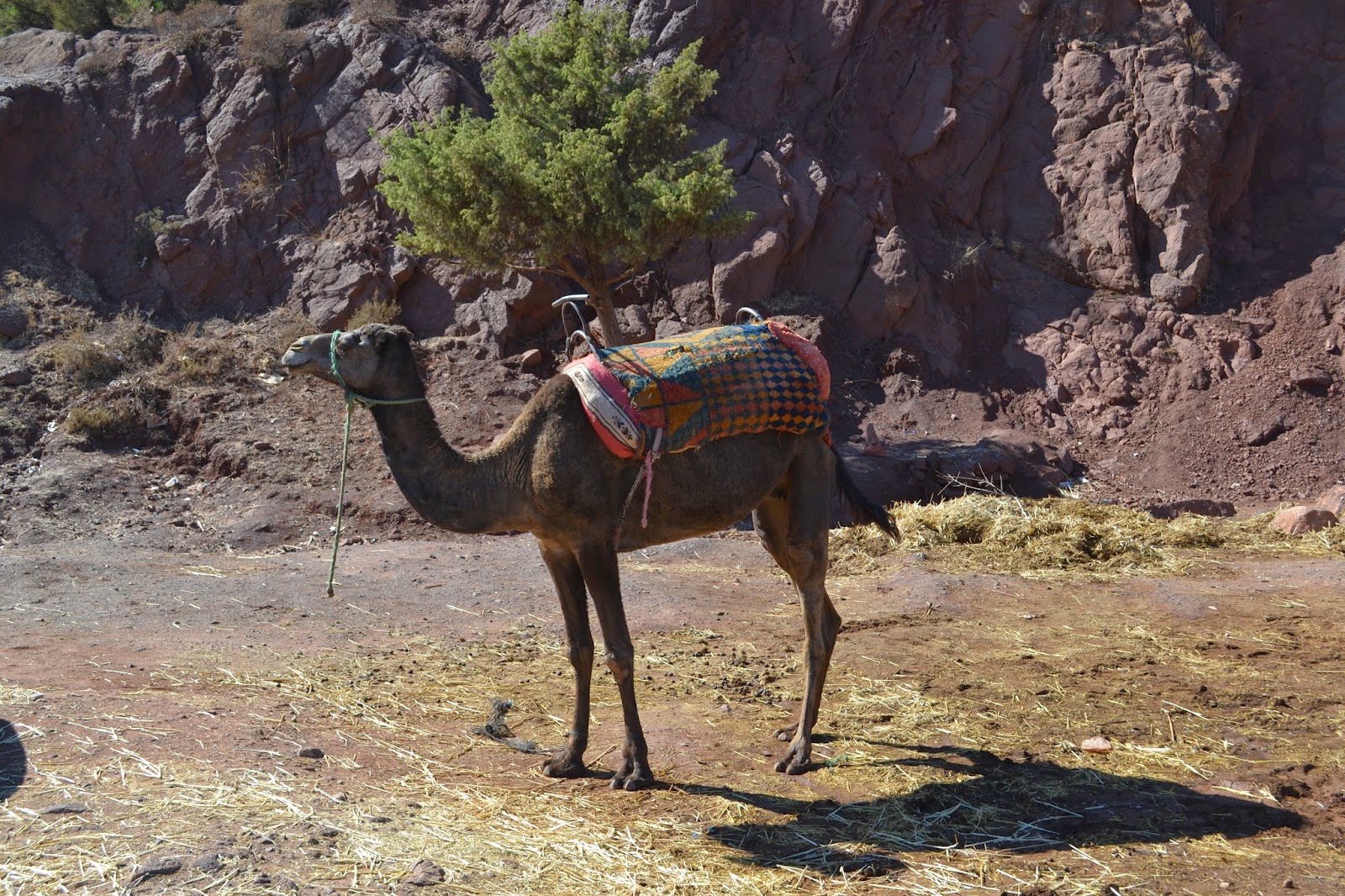 Up close, the Camels were even more beautiful and in fantastic condition. Although, the same can’t be said for this fella with his hilariously cute face! 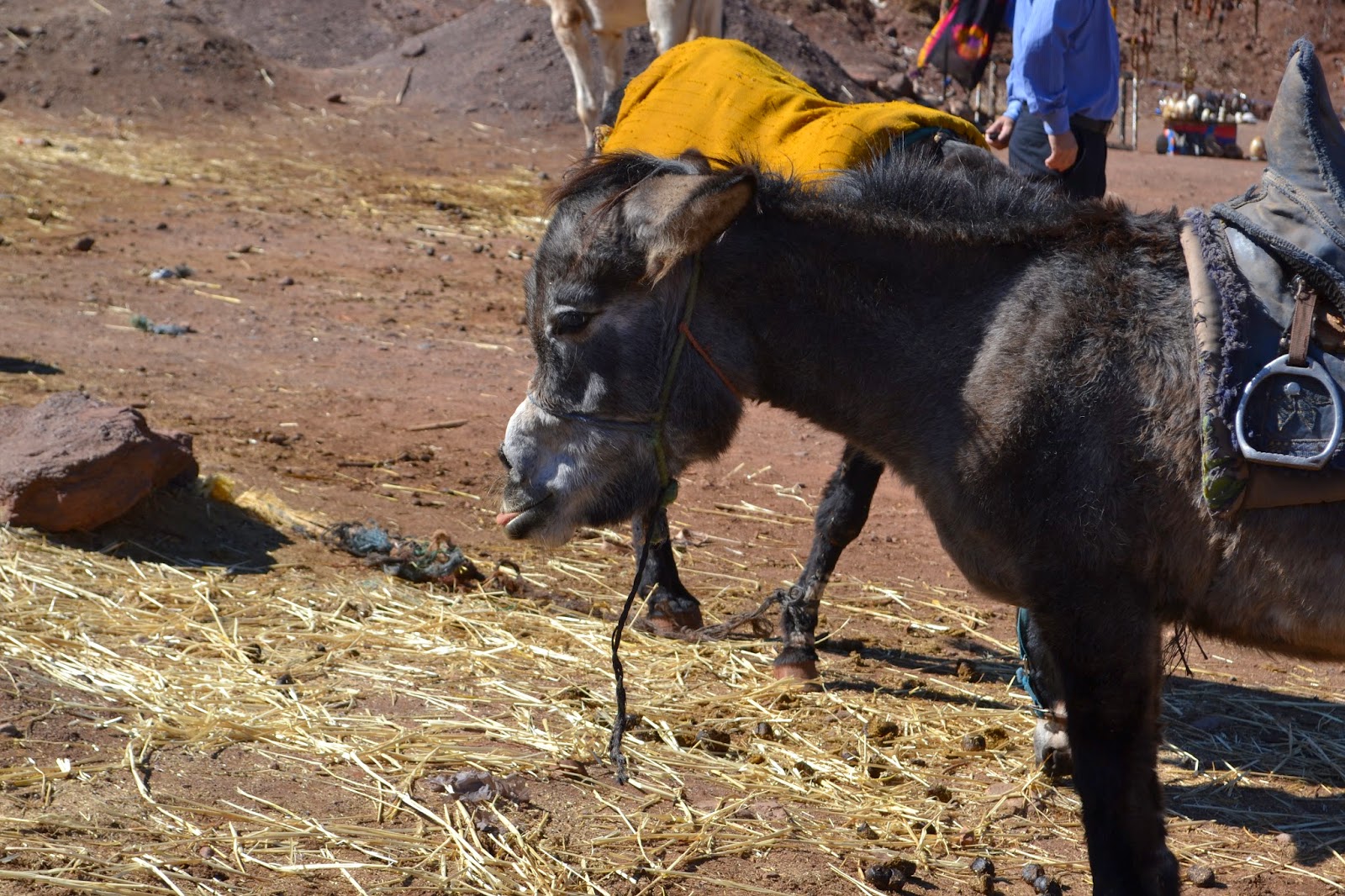 I wanted to do the whole experience where they lie down so that you can climb on, but there was a step ladder so I thought I should oblige and do the ladylike thing instead.

My saddle was slightly wonky, which didn’t make for the most comfortable journey, but I loved it all the same. You sit a lot higher than when on a horse, but the ride is a lot smoother. Probably down to the Camels wide cloven hooves.

I was perched atop a female camel, who’s baby was carefully tied on to her and Ben had a slightly larger camel to sit on. The two of us were off, lead by a guide – a young boy of about 14. 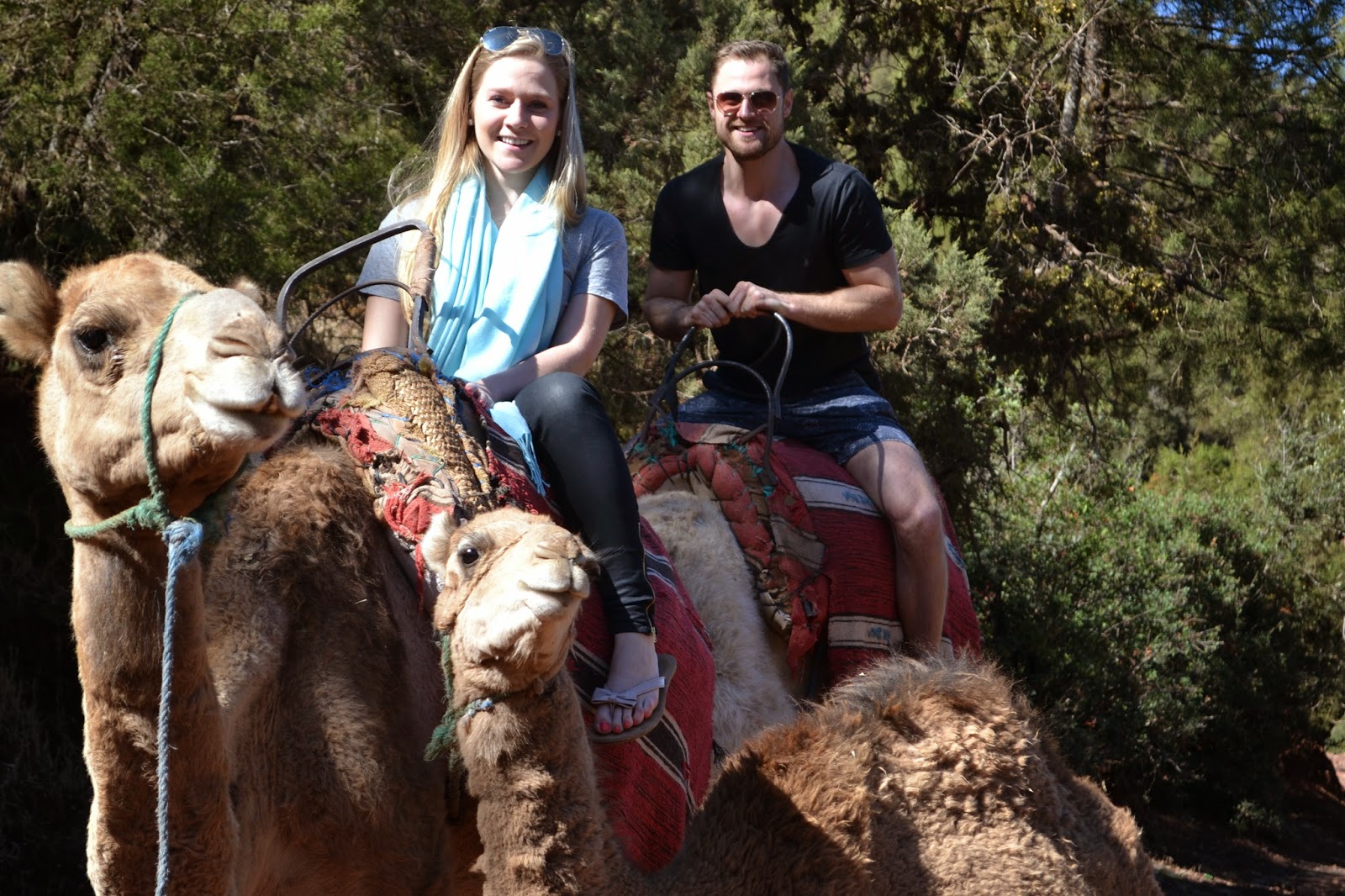 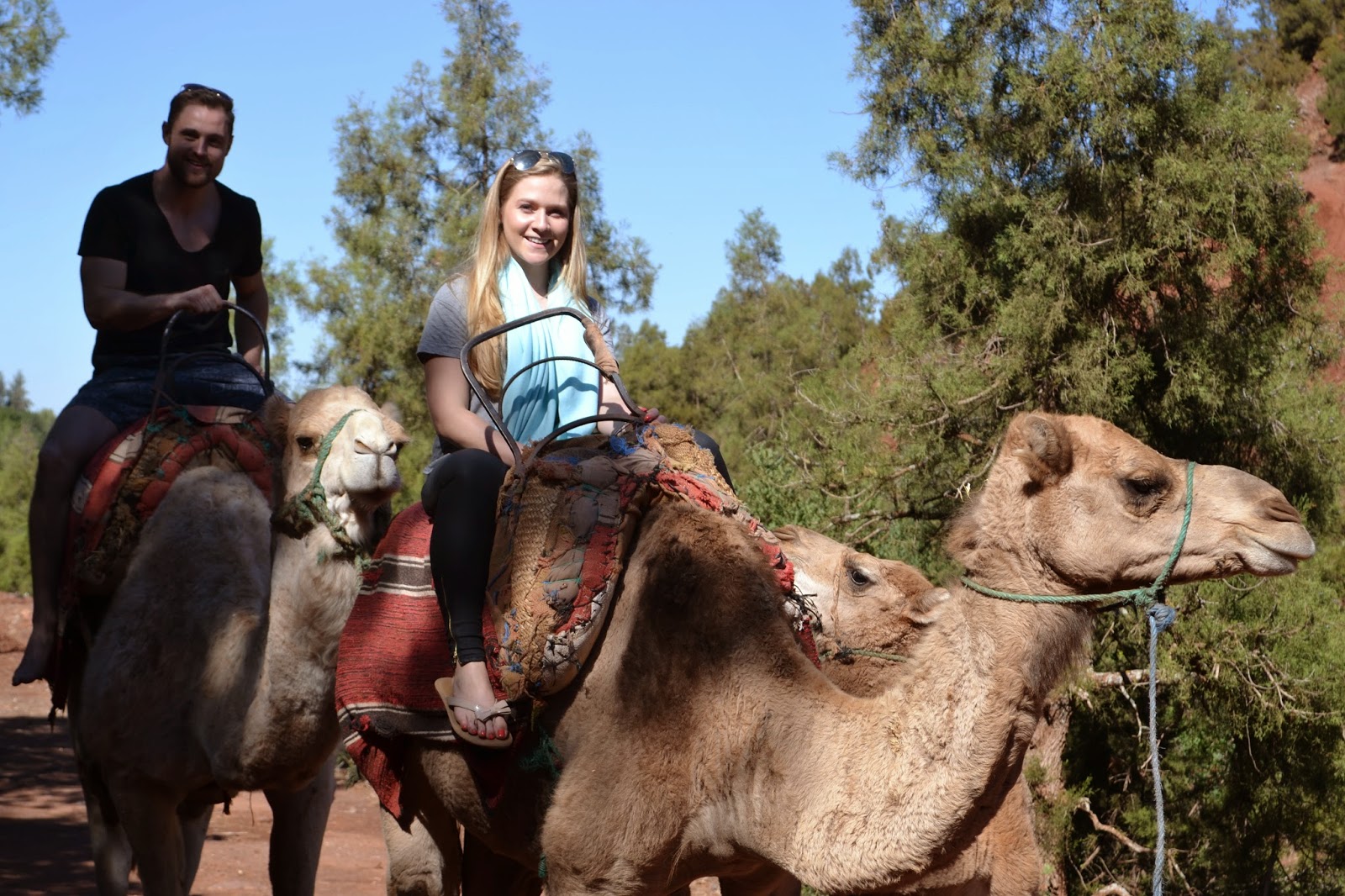 The babies are attached to the mothers, not only for comfort, but because it gets them used to humans and having people above and around them. It conditions them to be ready for their future in the tourist industry.

Our walk wasn’t terribly long, but I enjoyed every second of it. I had my DSLR with me and more than once, the boy stopped us and offered to take our photo. When we got to the turning circle to head back, we ensured we handed him a 50 dirham tip. We didn’t want to give it to him in front of everyone else, for fear his ‘boss’ would confiscate it. And he really did take some good photos!

I was really surprised at how lovely and friendly the camels were. They didn’t smell at all and had really soft fur. Especially the gorgeous baby!

Ben’s camel was tied to my saddle so his head was really close for the whole walk, so he nuzzled my hand when I stroked his nose. 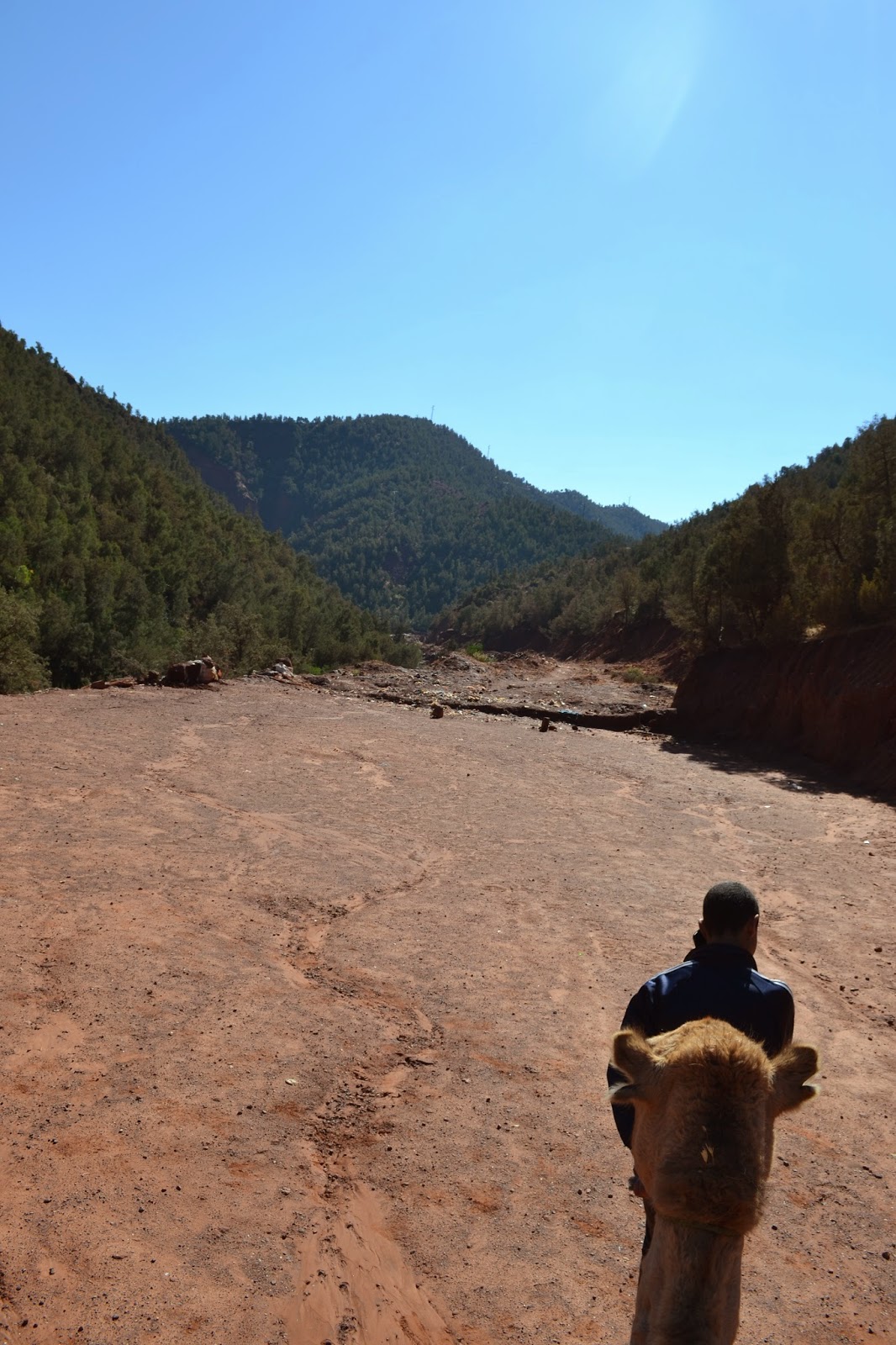 I wasn’t terribly surprised to hear that camels aren’t native to Morocco, instead they were brought in years ago to encourage the tourist industry. Now though, they are in abundance and commonly associated with Marrakech.

In fact, the only camels left in the wild are found in the Gobi Desert, in Mongolia! 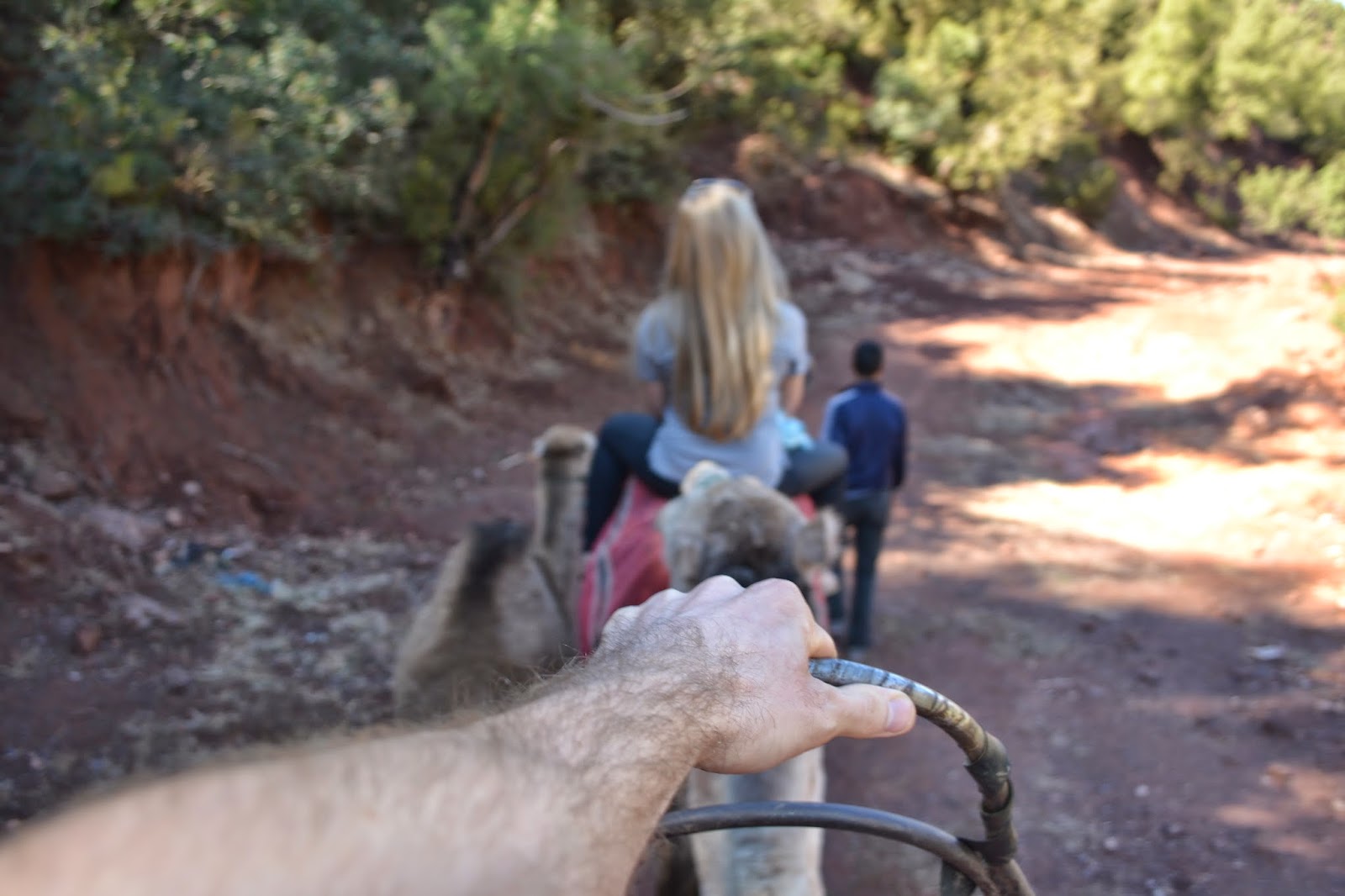 Funnily enough, there really aren’t that many native animals to Morocco. You can find Barbary Macaques in the mountains, along with a few Leopard, Hyenas, Elephants etc but the Barbary Lion and Barbary Cheetah have long been extinct as they were chased into the mountains and hunted down.

You can however buy many smaller animals in the markets including tortoises, chameleons and squirrels. I now dream of having a house in the country in Morocco and keeping hordes of animals  on the land. I’d take all the monkeys that are paraded across the main square and let them free in the grounds.

A girl can dream! Just wish me good luck on the Euromillions tonight!