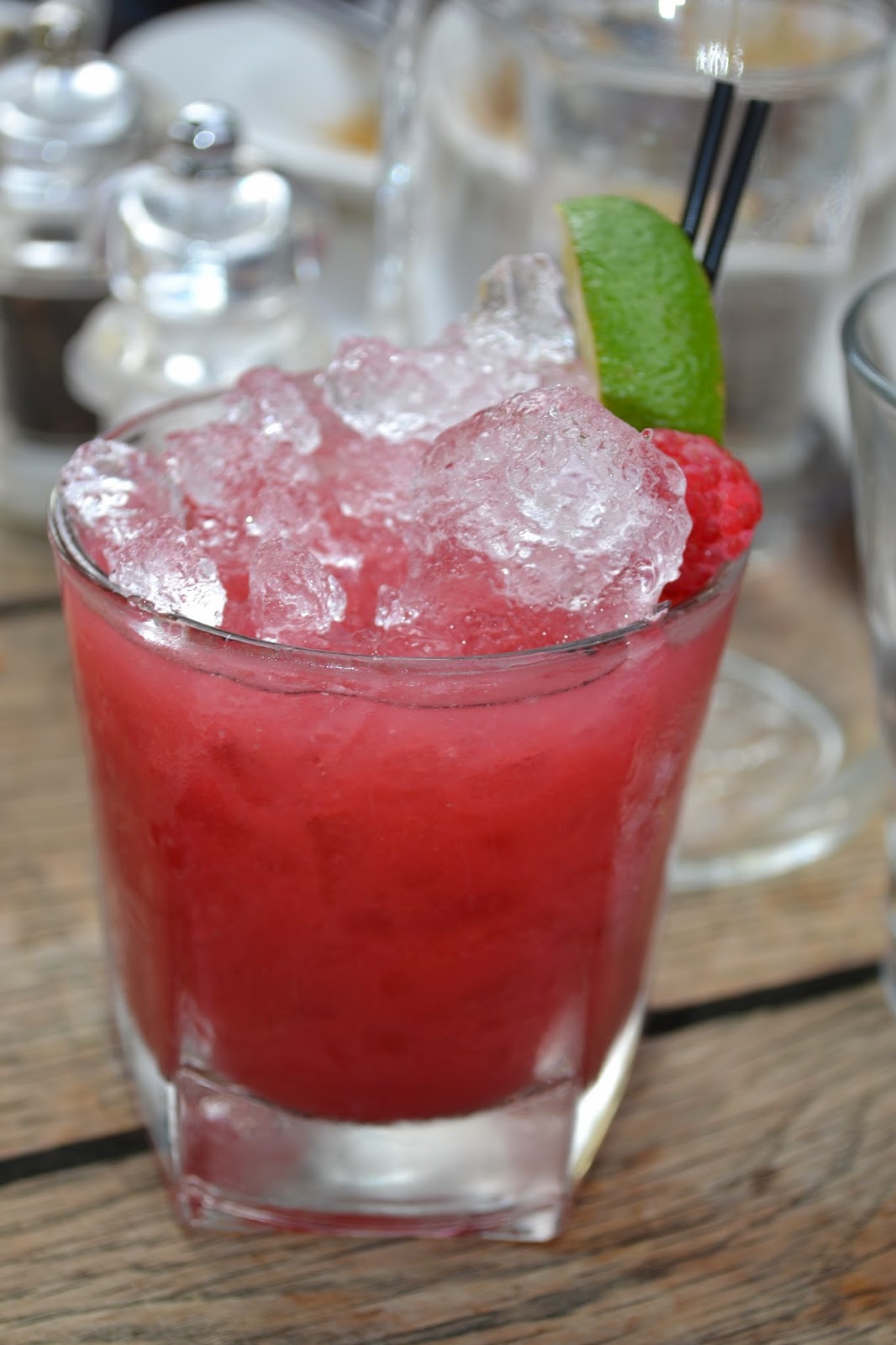 This cocktail just so happened to be perfect. A gorgeously fruity Caipiroska.

We had a weekend free, which is extremely rare and we were really looking forward to a quiet stay-at-home one slouching in our PJ’s and watching films. It was not to be, as I received a text from Tom inviting us to breakfast. Whilst The Gentleman had been up for hours (pumping iron in the gym) I was still in bed, so breakfast was not feasible.

We’d passed The Wells in Hampstead numerous times, but never paid that much attention to it, so it was decided we’d all head there for a good pub lunch. Although, there really is nothing ‘Pubby’ about The Wells at all!

The sun was shining, the birds were singing, the flowers were bright and the menu was making our choices so difficult! Every day the menu is reprinted and edited, to ensure that all the best and most seasonal ingredients are used. This means that you can keep going back to sample different foods.

Now Tom, you’ll know from Amsterdam and Croatia and Eve cropped up many moons ago when I had just started blogging. They are one of my favourite couples ever and Eve and I are kindred spirits.

Although it’s been about 2 years since I last saw Eve and this was her first time meeting Ben, she’s one of those people that I am completely myself around. We both grew up in the South West and share similar beliefs and values for life. Plus, she truly makes me laugh out loud – that kind of laughter where you can’t stop and your stomach starts to hurt.

We also happen to have the same taste in food; so both ordered the stuffed peppers with Goats Cheese and Pea Puree.

Tom chose more traditionally and decided on an old classic; Bangers and Mash with gravy and caramelised onions.

The Gentleman is being really good at the moment, trying to slim down then bulk up, so he had lunch earlier. We ordered some bread and oil though, just in case he got peckish. 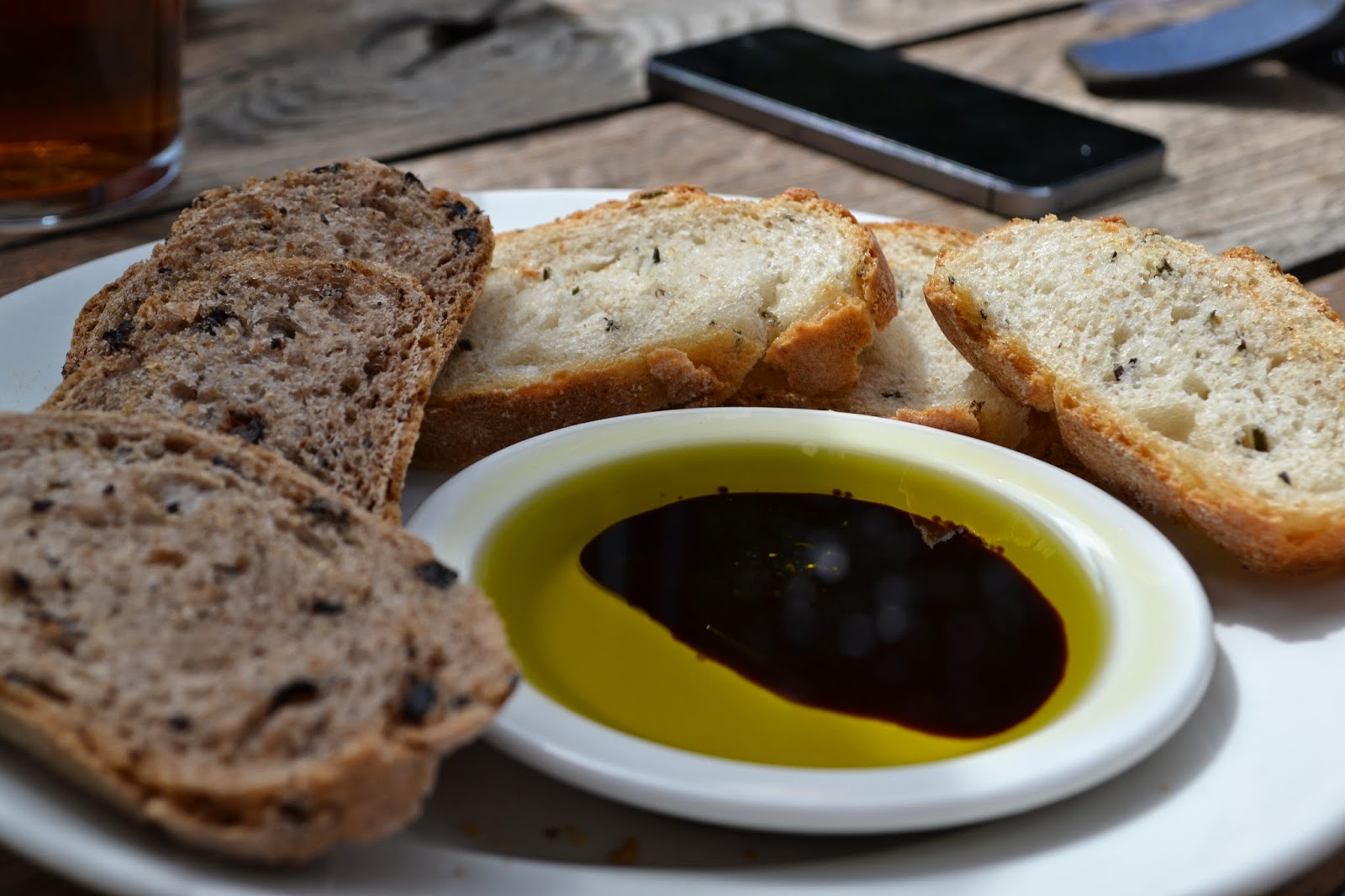 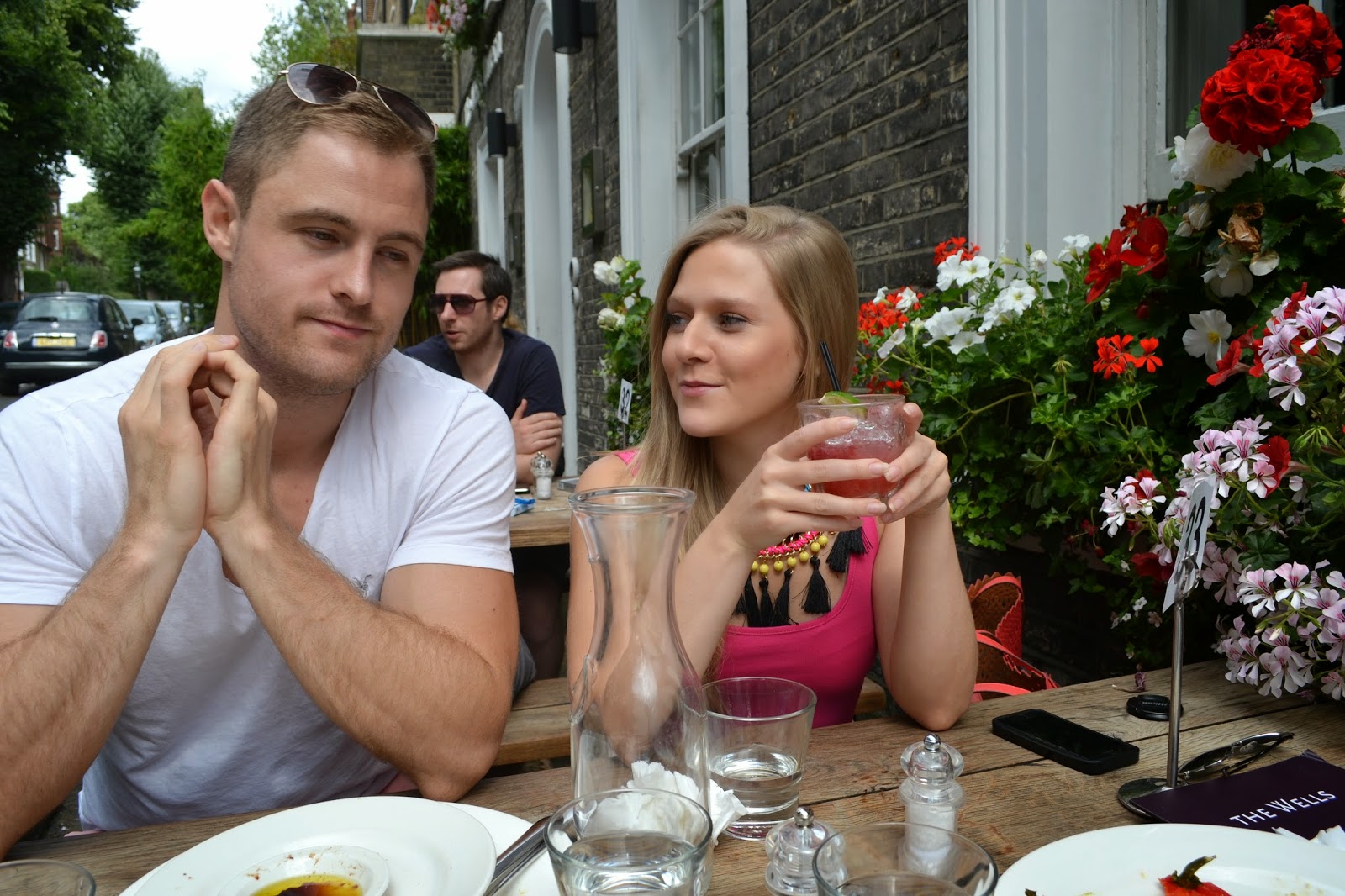 He still eyed up our food though. Naughty boy!

I was supposed to be being good too as I’m going through a ‘transformation’ at the moment to try to slim down and tone up. That failed when I started to get cravings for Sticky Toffee Pudding…

But I am training 2-3 times a week with my own personal trainer (who just so happens to also be my boyfriend). If you’re interested in finding out more, follow @LDN_PT for fitness tips, inspiration and to follow my fitness journey!

My sticky toffee pudding was perfect. It’s traditionally served with clotted cream in the South West, but I’ve always preferred it with ice cream as it cuts through the stodge better. 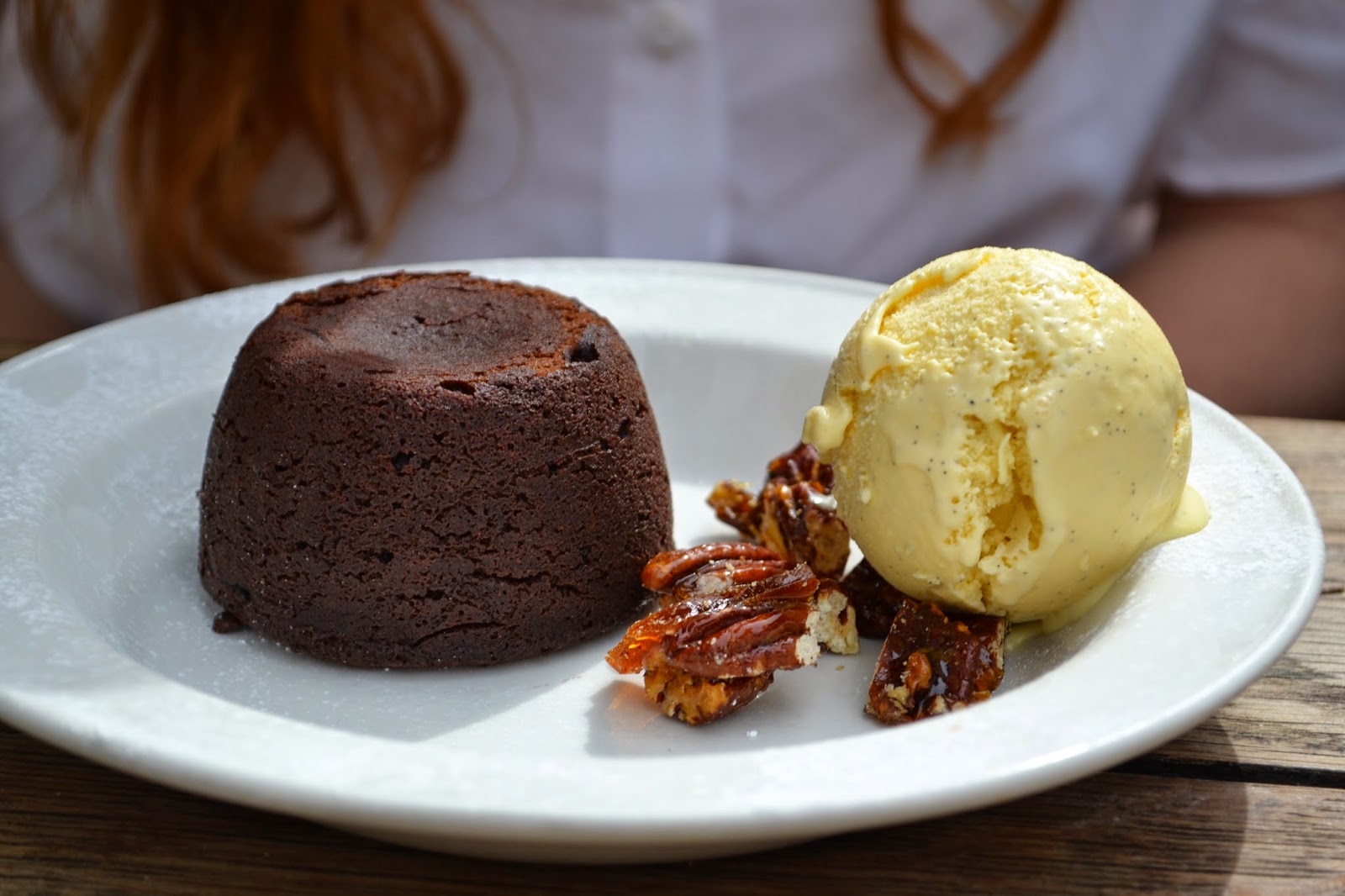 And the piece-de-resistance? Eve’s melt in the mouth chocolate and praline fondant with vanilla ice cream. 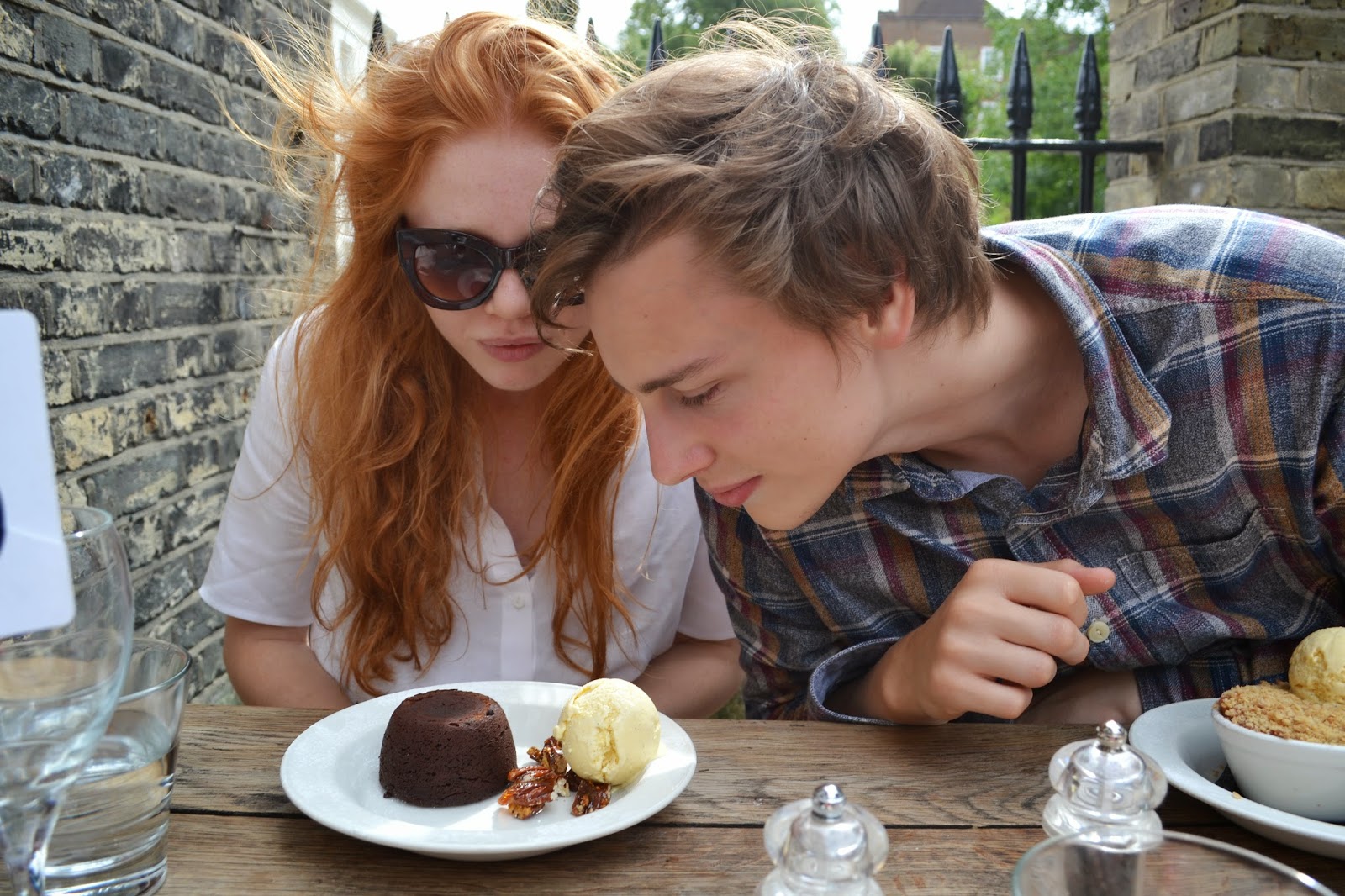 I’ll leave you with this picture of the molten, chocolatey, deliciousness before I wrap up. We weren’t finished with the day, but I think I’ve given you enough food and excited faces for one post!