I am a huge fan of the Royal Family.

I’ve always thought having Kings and Queens, Princes and Princesses, a rather romantic idea. Having a government sounds so dull, don’t you think?

My dad gets lots of perks from being in the military. One of those is getting tickets every year to the dress rehearsal of the Queen’s Birthday Parade, or ‘Trooping the Colour’. He gave me his tickets this year for my birthday, so I decided to make a day of it with The Gentleman and Lilidh.

The day started bright and sunny. Before it took a dramatic change; 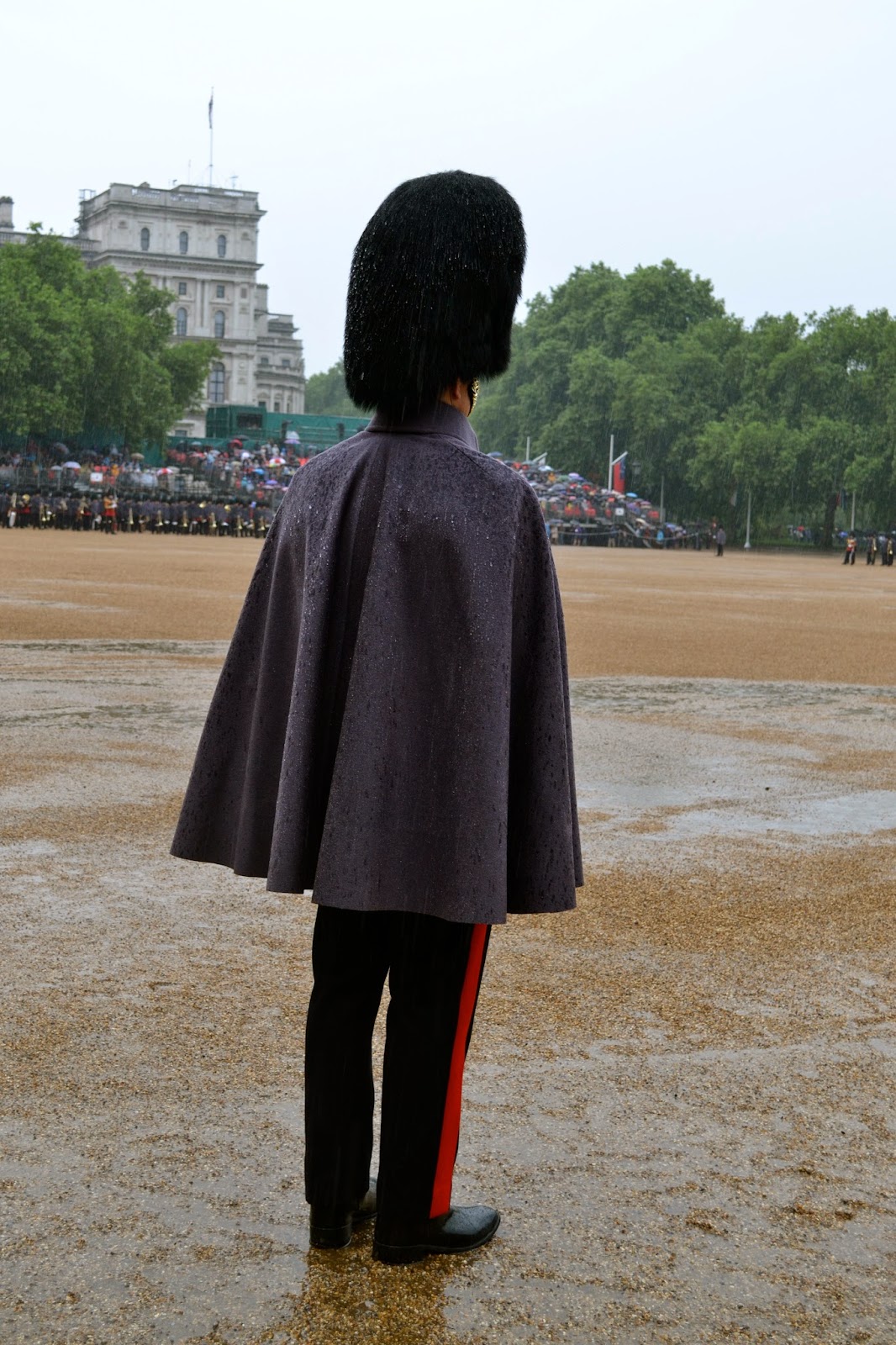 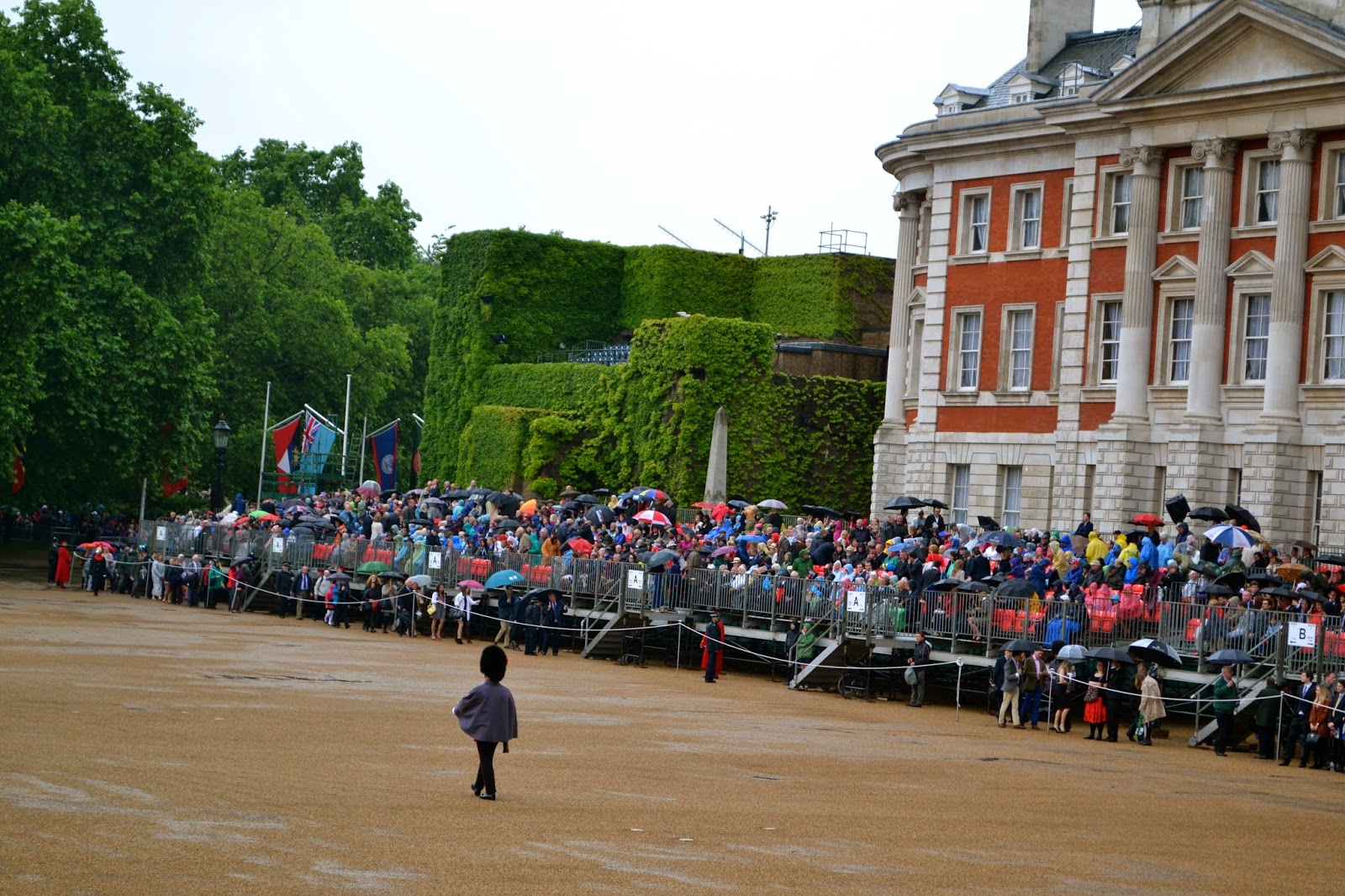 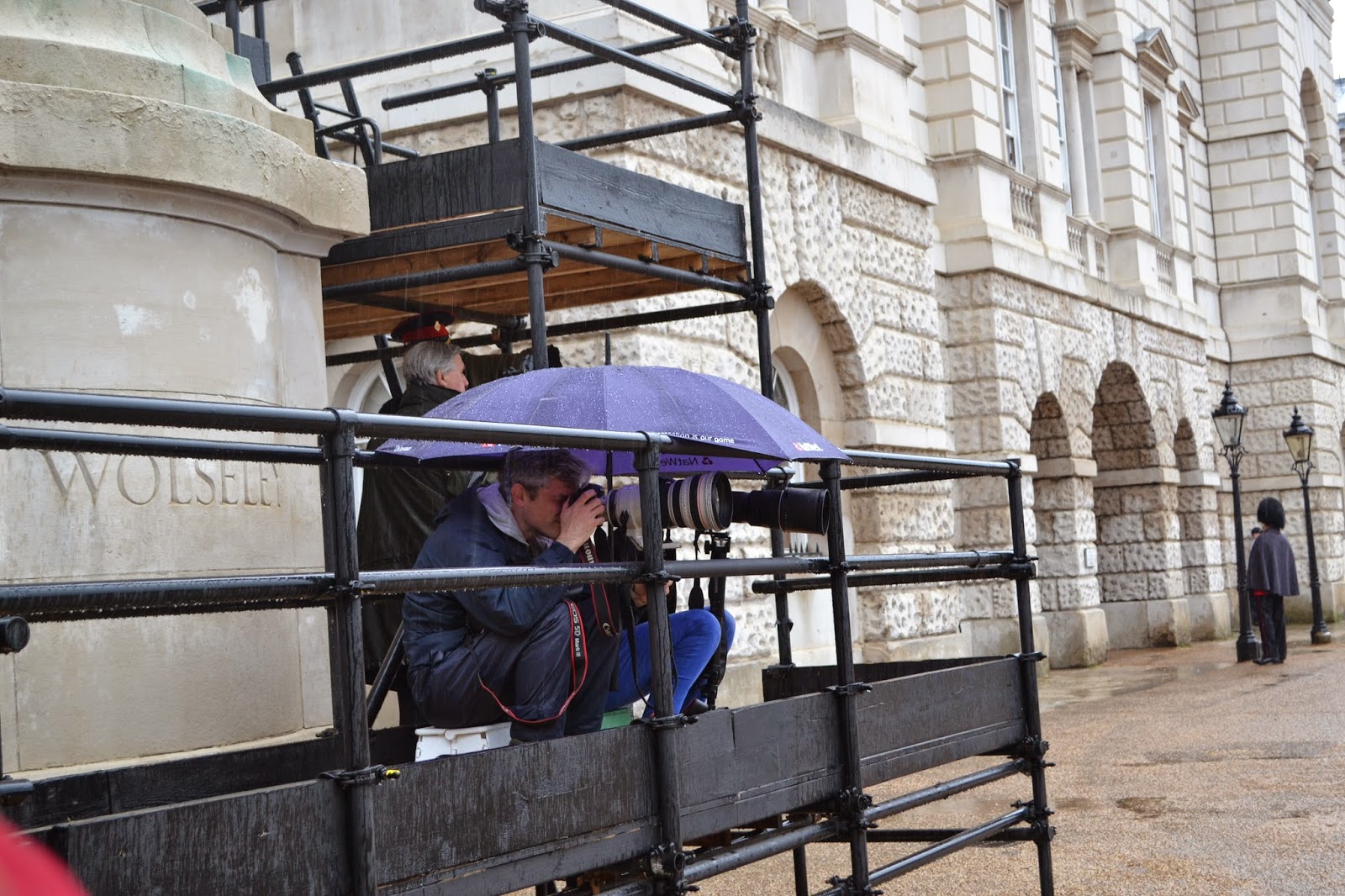 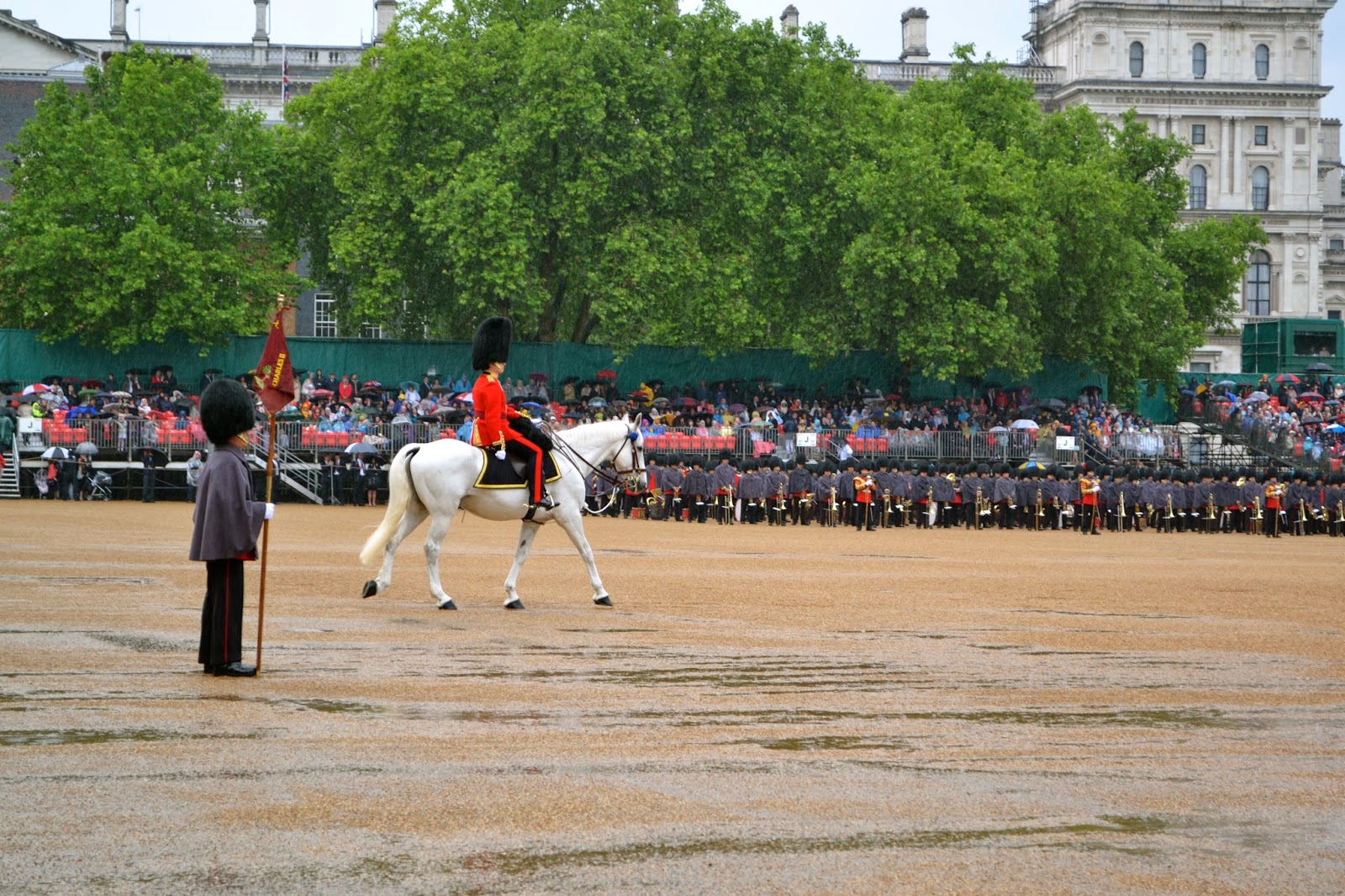 This gentleman then trotted forward, and ordered everyone to remove their cloaks. In a flurry of one movement, a wave like motion, all the grey had vanished. It left a bold red statement standing tall and proud in the rain. 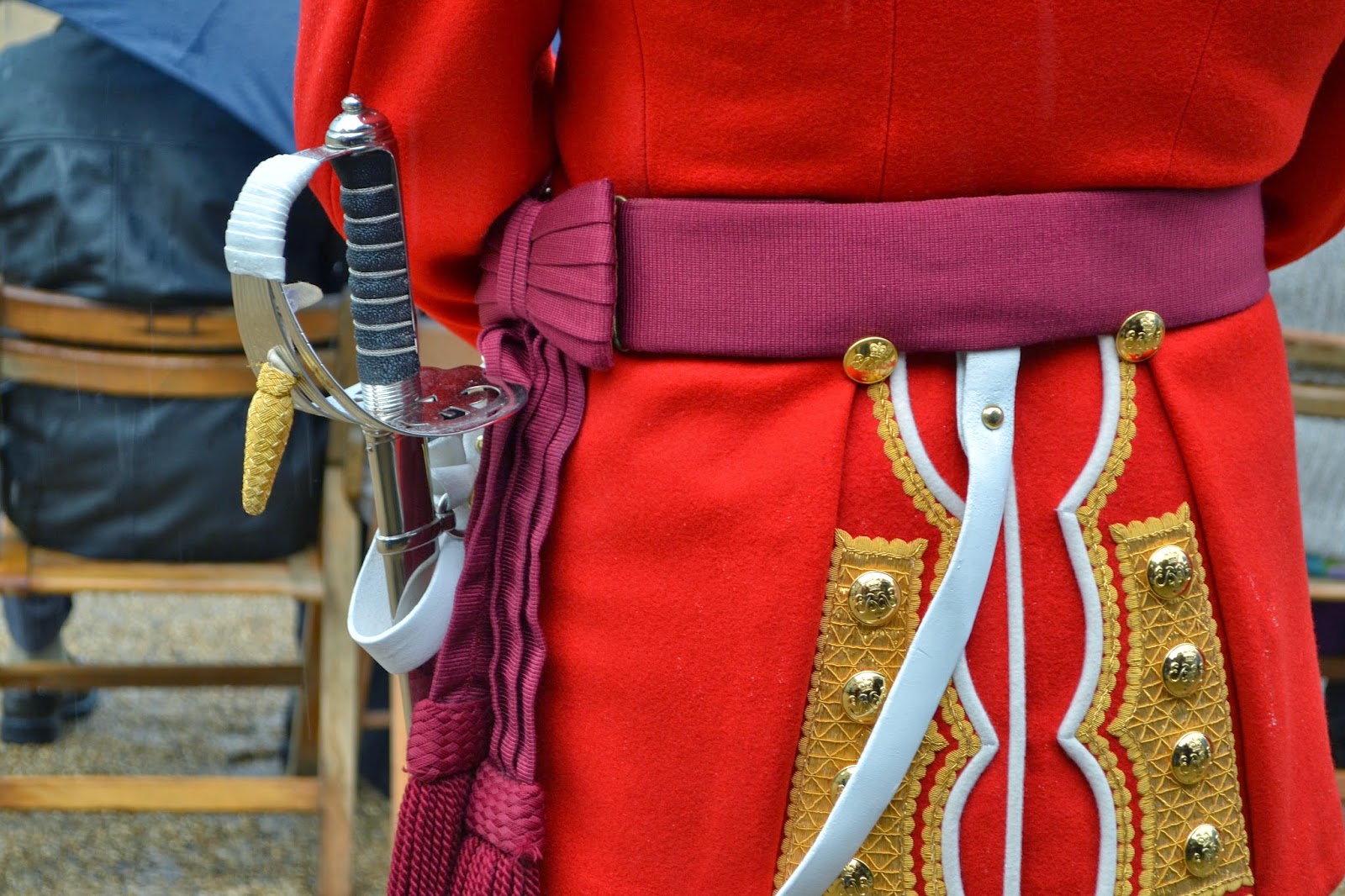 Landrovers drove forward to collect all the cloaks and the Trooping of the colour was allowed to commence. We had been given THE best seats in the whole of the Horse Guards Parade. But when the rain came down, the armadillo that was all of our umbrellas meant that rain water streamed down each persons umbrella to hit the person next to them, completely drenching them.

Our solution was to stand for the parade, which also meant my photos were much better!

If there’s one thing I can count on, to put a smile on The Gentleman’s face when the weather is miserable and his suit is clinging to him, it’s a little baby. He can’t help himself…

Before we knew it, the rain started to fade. Little did we know but it was to make way for one of the hottest days of the year so far. Typically, we had already been drenched beyond repair! 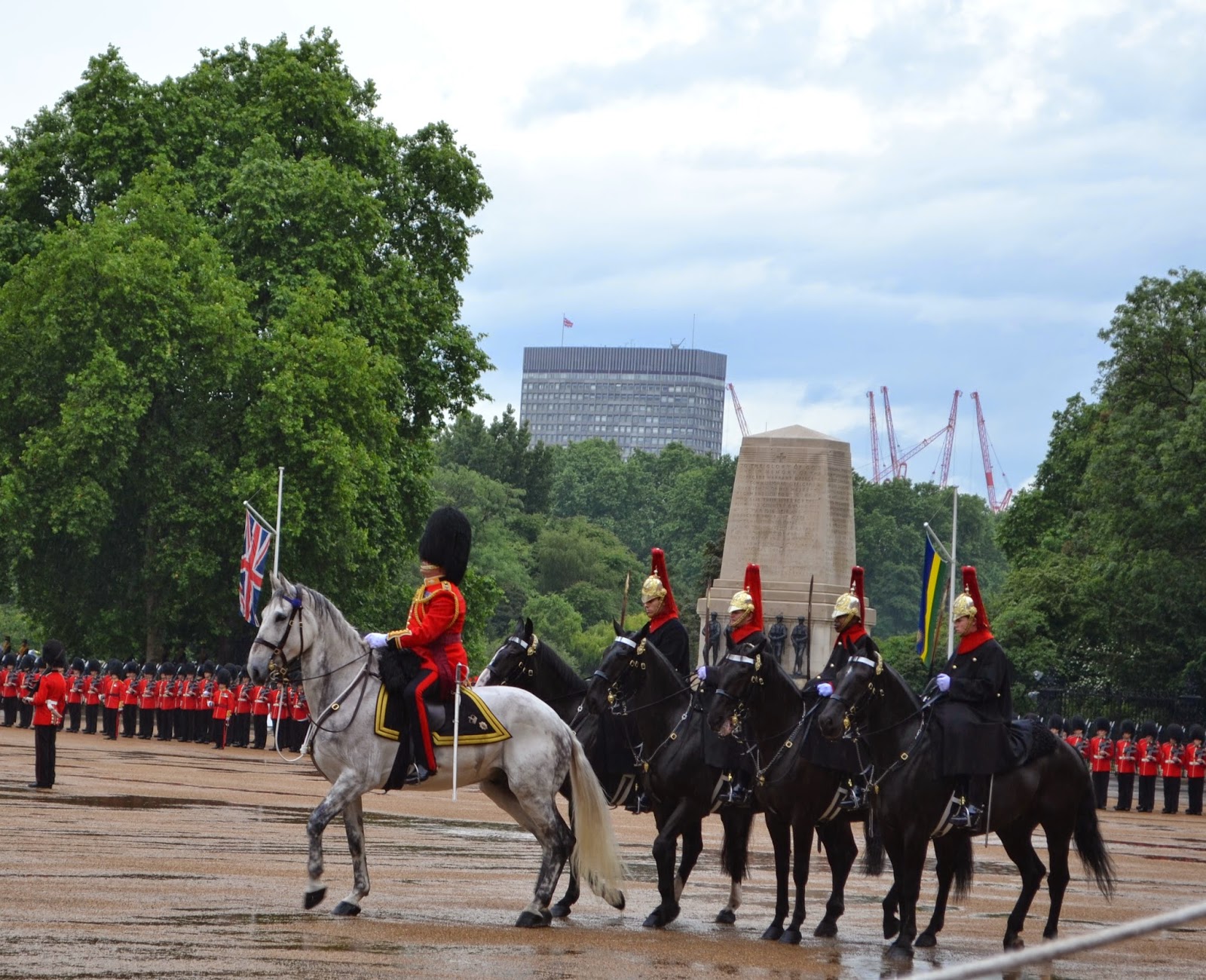 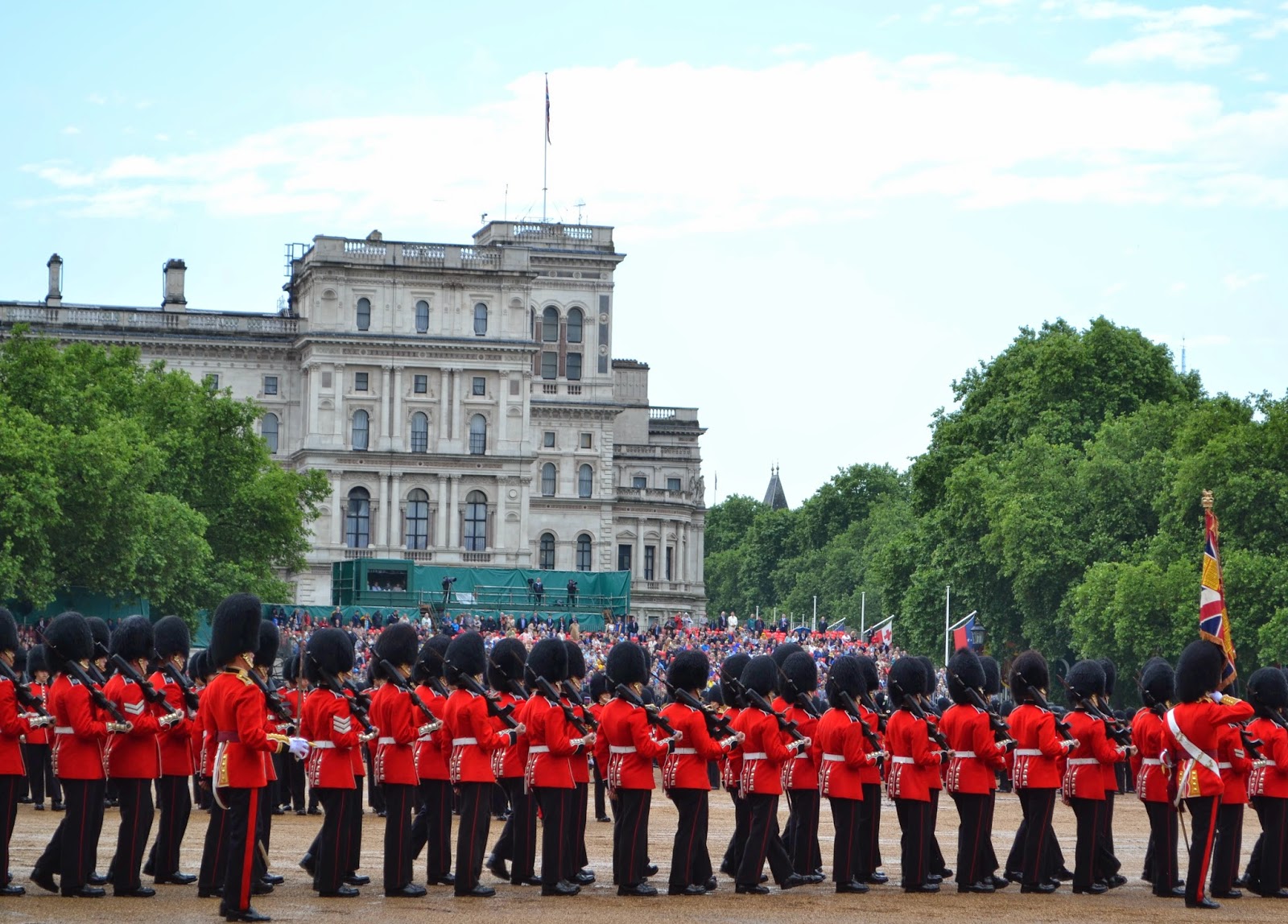 When the horses started to thunder past us, you could just imagine in years past when you were standing and about to face our Army’s in battle. The soldiers in their crimson red jackets and tall bear skin hats. The band, hammering out  chorus after chorus of battle song, and these guys; charging forward with swords outstretched.

The boys did an incredible job, I don’t know how they managed to continue with the weight of those bear skins on their heads soaked in water!

Being true Brits, when it ended, we decided we didn’t want our day to end too. It called for a quick trip home to change out of our wet clothes, and back into town for some lunch. Of course we would head to my favourite dining street in London; Heddon Street.

So Momo’s it was as neither The Gentleman nor Lilidh had been before.

The Gentleman did the ordering. This was a sharing day.

I couldn’t not have a cocktail while I was there, well we were celebrating the Queen’s Birthday…nearly?! 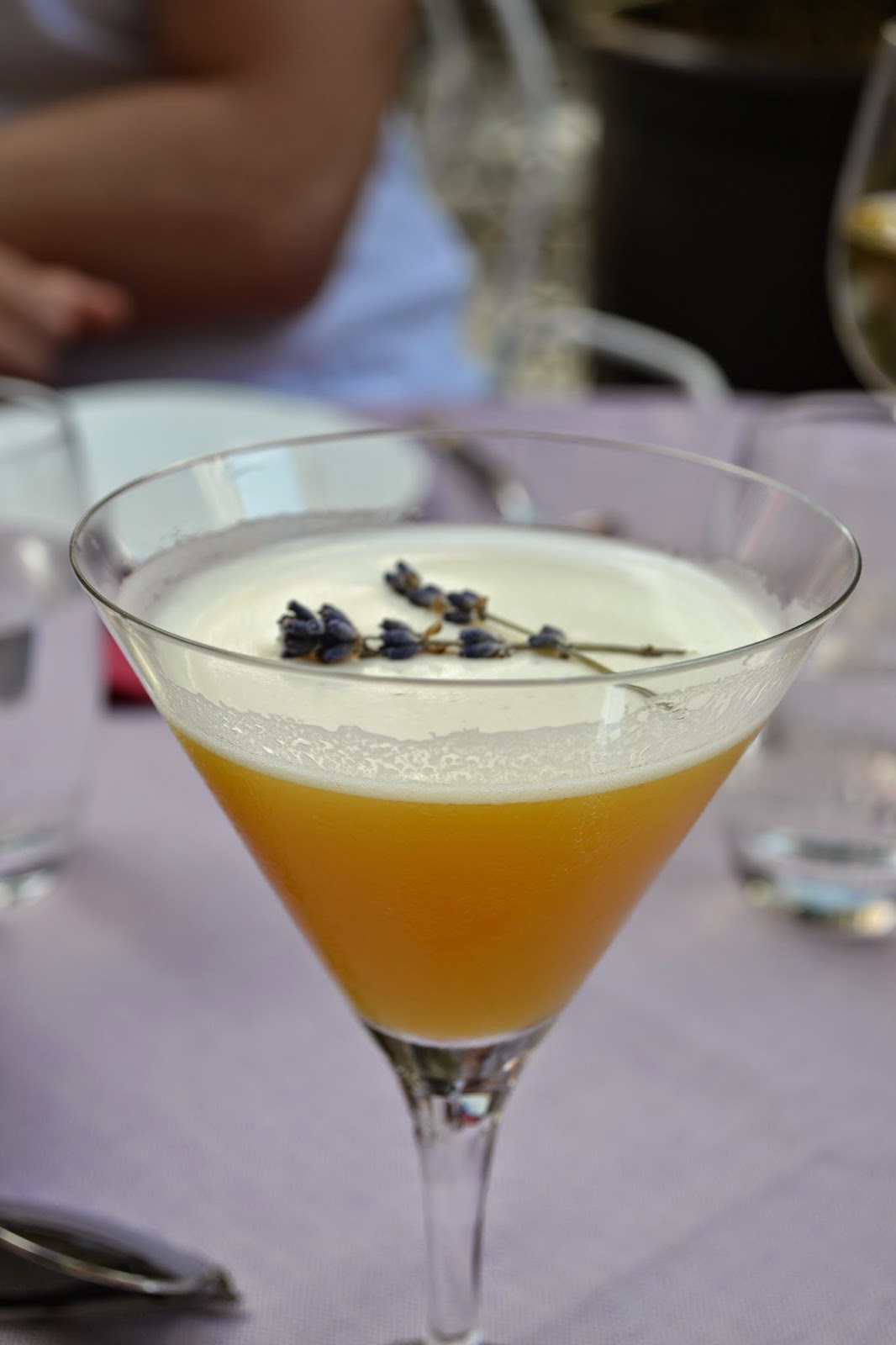 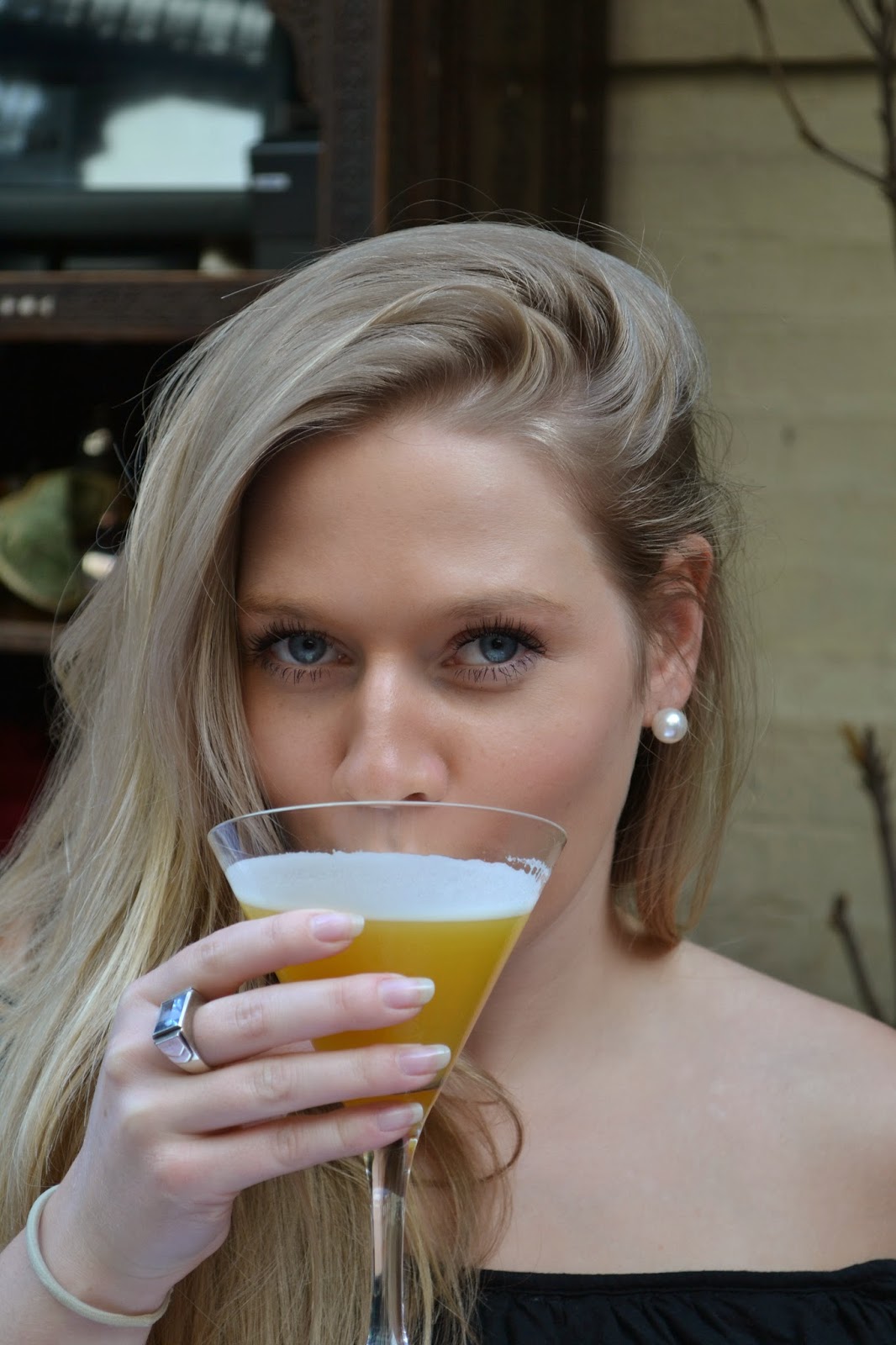 Food was a quarter of a chicken each (half for The Gentleman) with Zaalouk and Mechouia.

I think she likes it!

The best thing about sharing dishes is that you don’t feel at all guilty about ordering pudding! 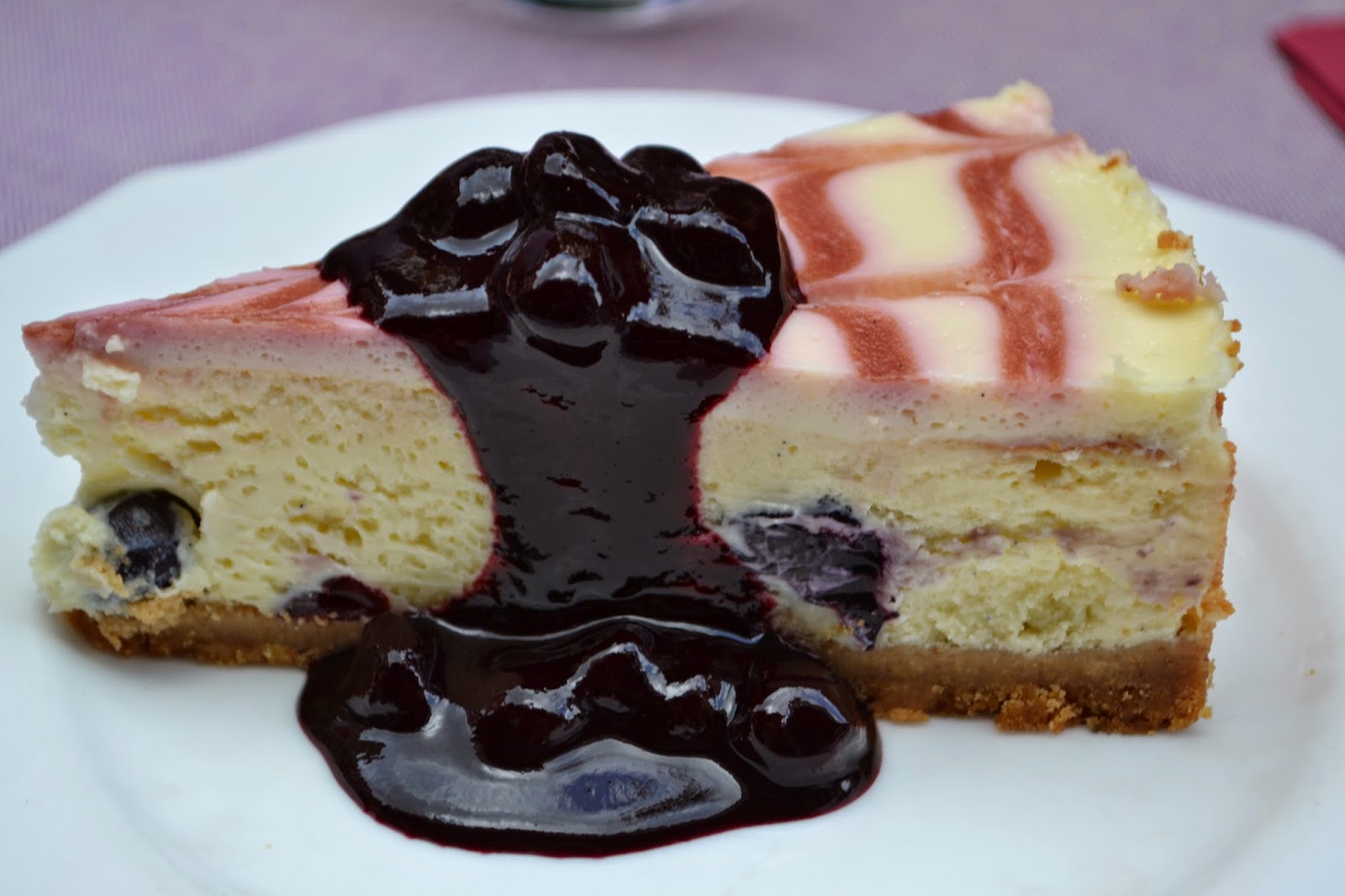 Blueberry Cheesecake for Lilidh and I to share, and an Almond Pancake for The Gentleman.

We found great hilarity in the following image. All it needs is for him to have his pinky sticking out!

I love how pouring tea here is turned into an art form. (Do not try this at home!!)

I may have stolen it off her when she wasn’t looking! 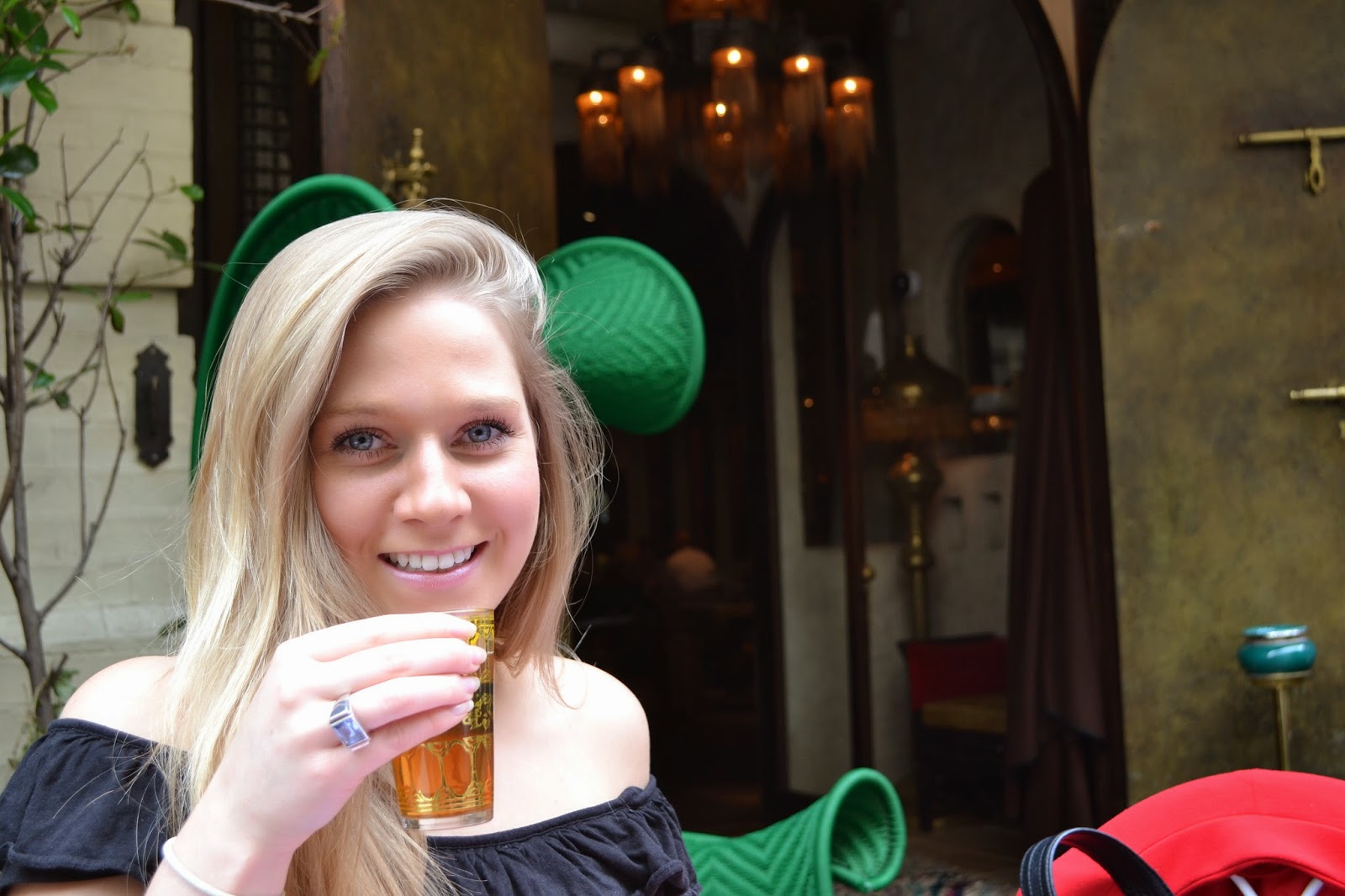