Once a year; everyone in Holland gets dressed up in orange to party in the street and celebrate together the Kings Birthday or Koningsdag. From the age of about 14, I visited Amsterdam pretty much every year but was never there for Kingsday.

This year however, the Gentleman’s birthday weekend just so happened to fall during this time so we hopped on over to Amsterdam to celebrate. I should probably mention now that my best friend, Jaime, also happens to live there.

We met at Green Park station after work, to jump on the tube and head to the airport. Although, the tube was absolutely packed, we eventually managed to get seats and the rest of the journey was entirely pain free. We arrived at Schiphol at around 8.30pm, after a glass of wine feeling very relaxed and entirely ready for the next four days. I’m glad we went to bed early that night.

On Saturday morning, we awoke to a very sophisticated breakfast and everyone donned their orange clothes before tucking into cereal and fry ups! 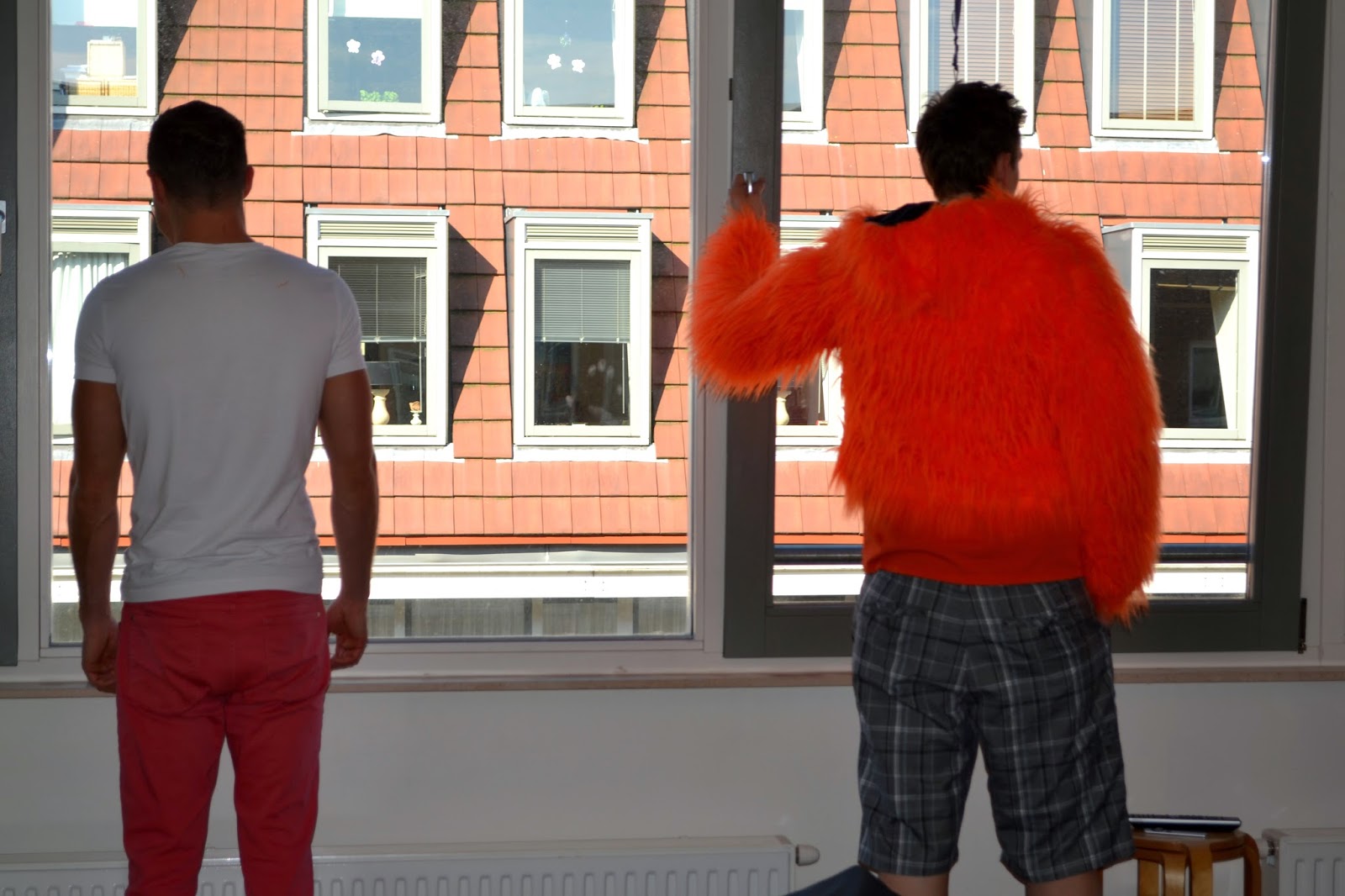 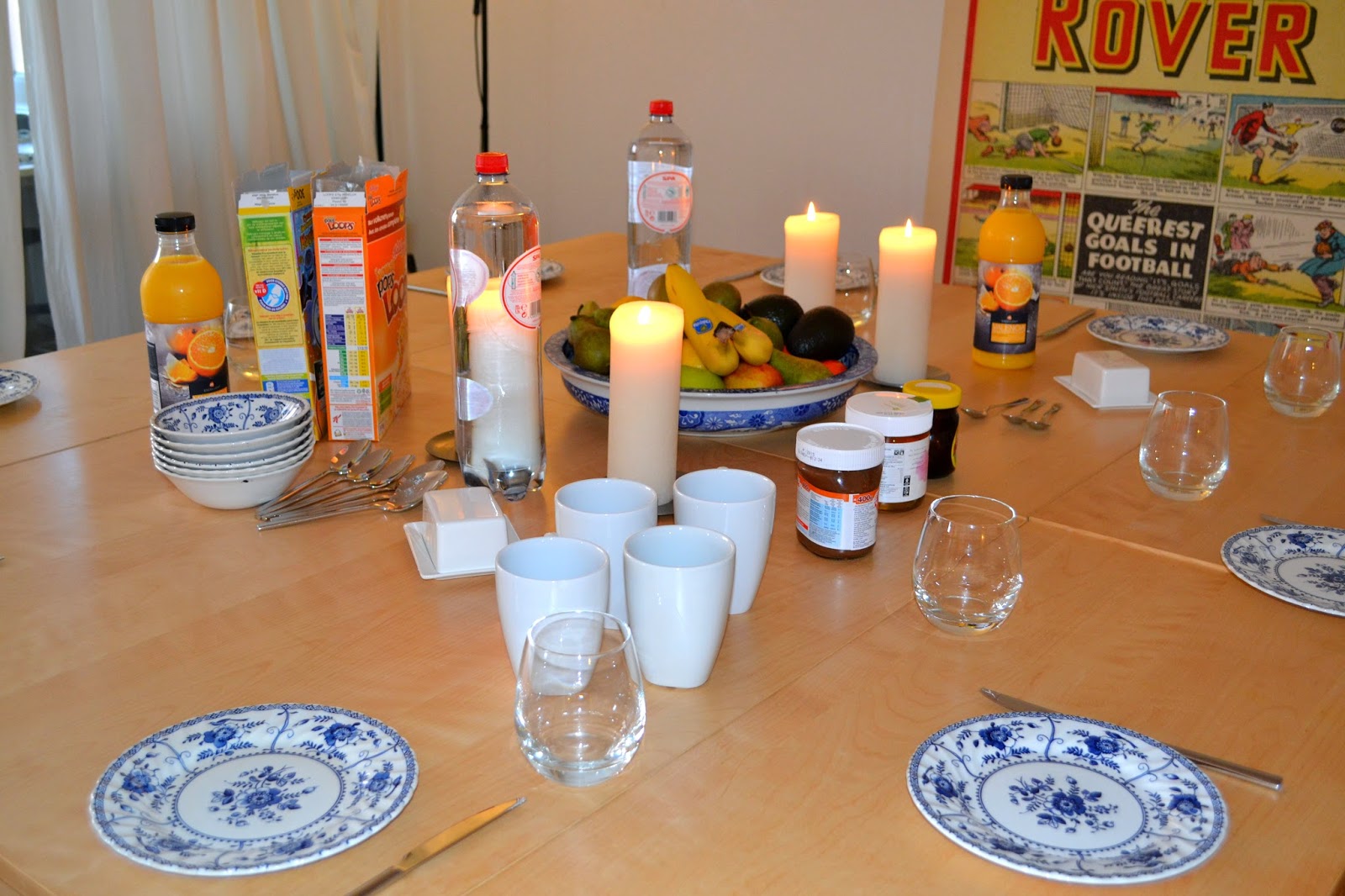 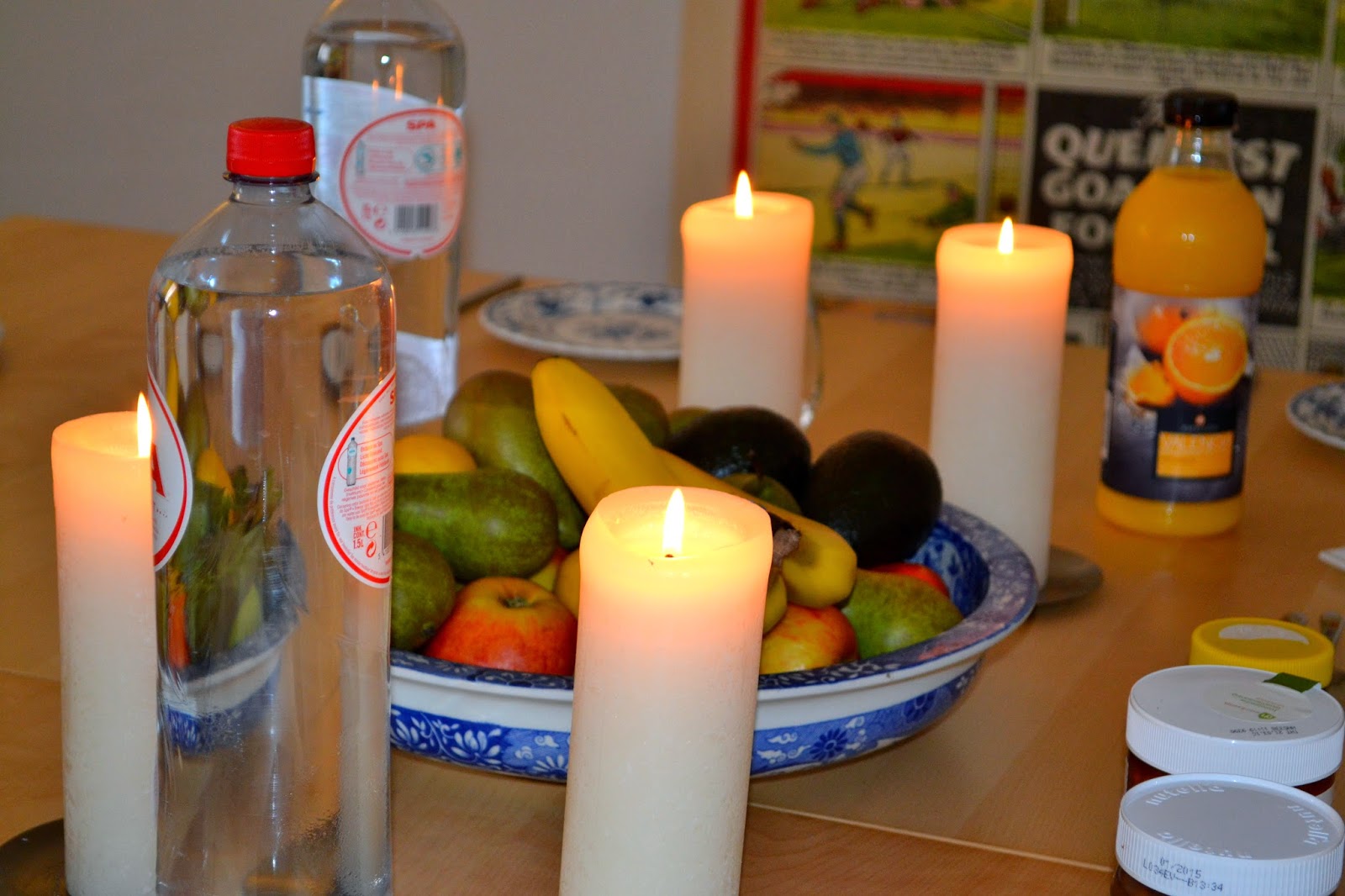 At about 10am, we were shocked to see bottles of Vodka and Malibu appearing. I had heard stories of the previous year. The boys had cracked open a bottle of Whiskey at 9am and drank constantly throughout the day. What. Were. We. Doing?! 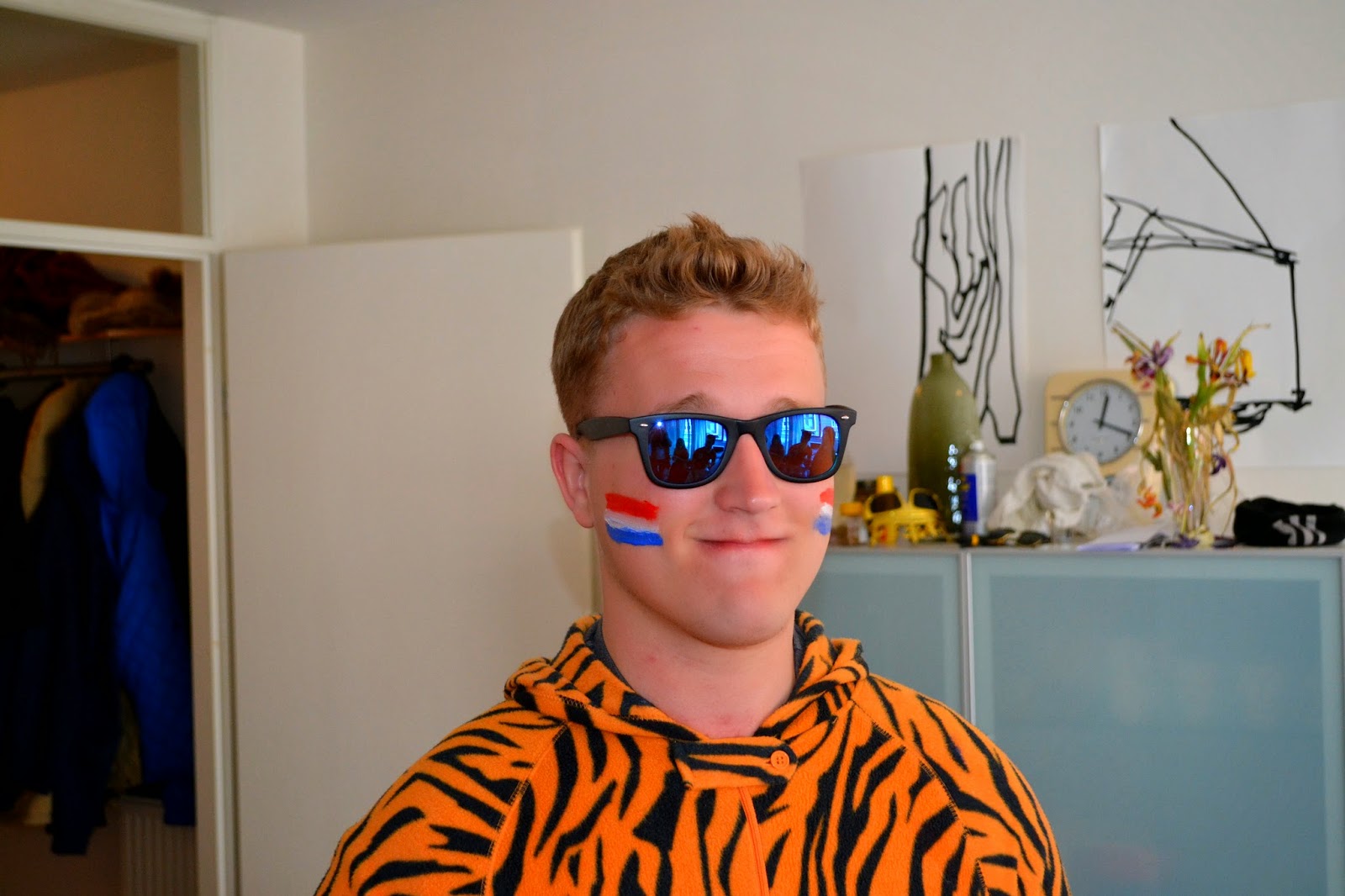 Face paint was brought out to ensure we were covered in the Dutch flag, and a lot of catching up with friends happened. I haven’t seen a lot of these lovely people for a few years, so of course masses of photos ensued; 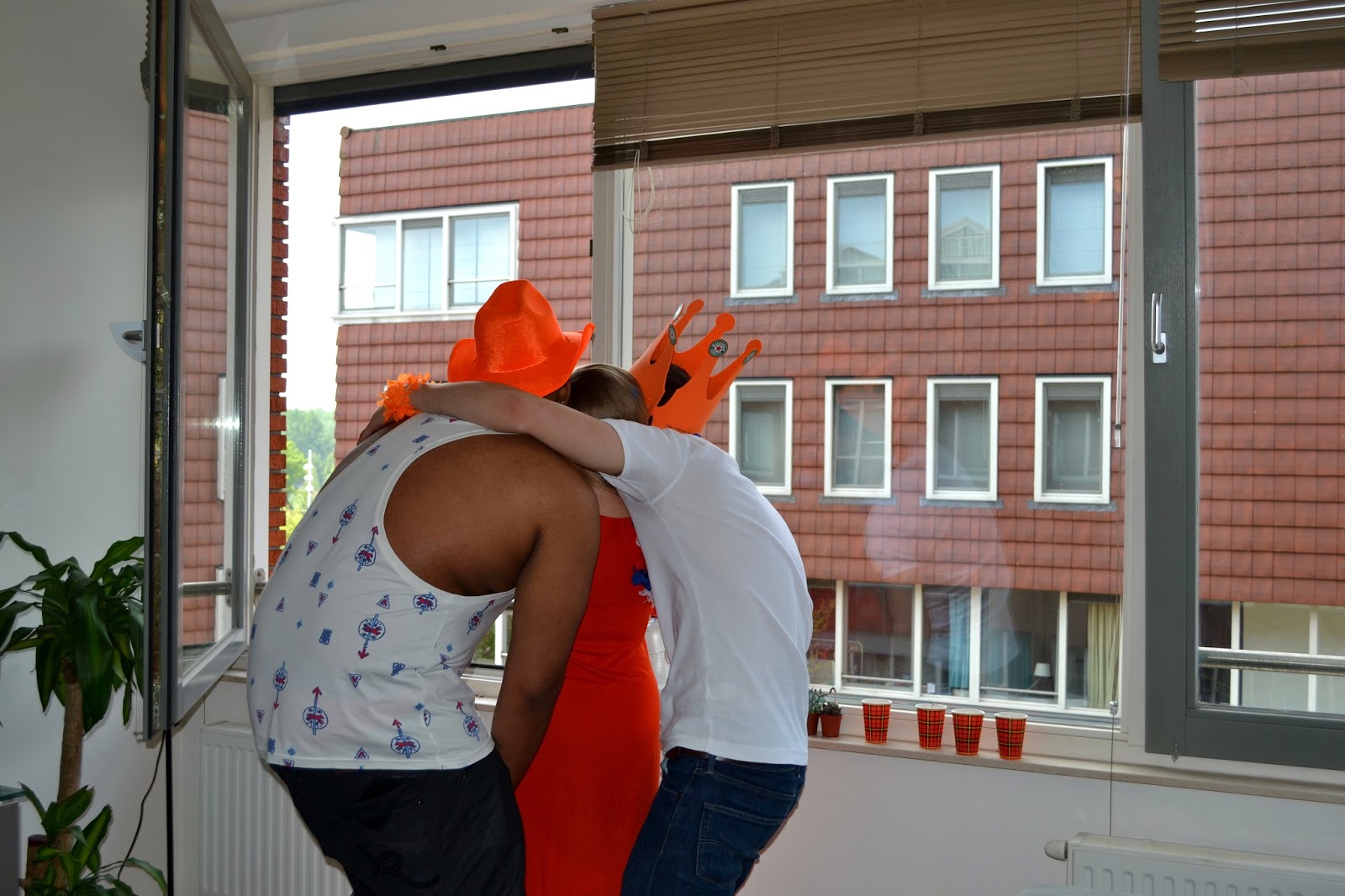 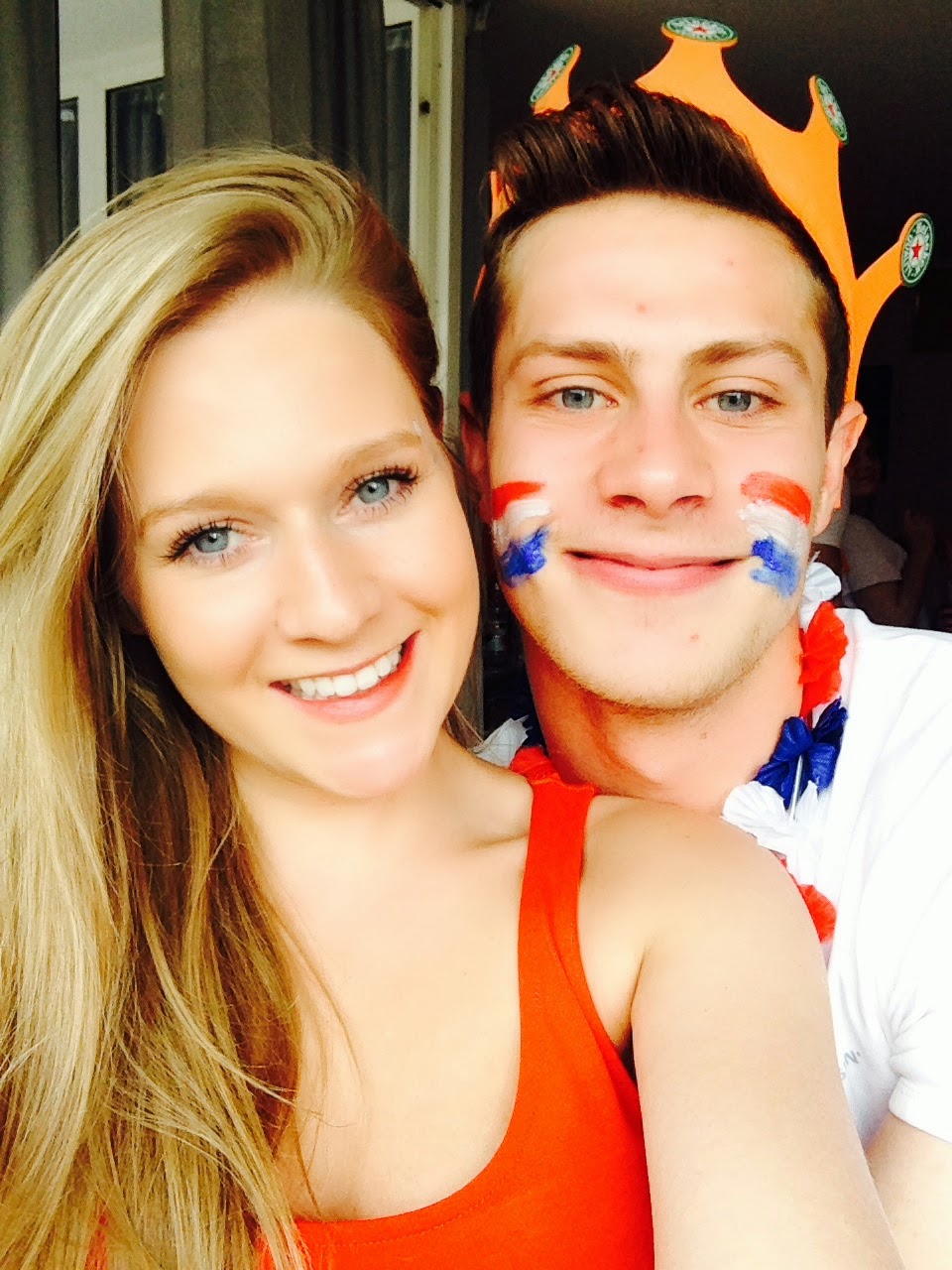 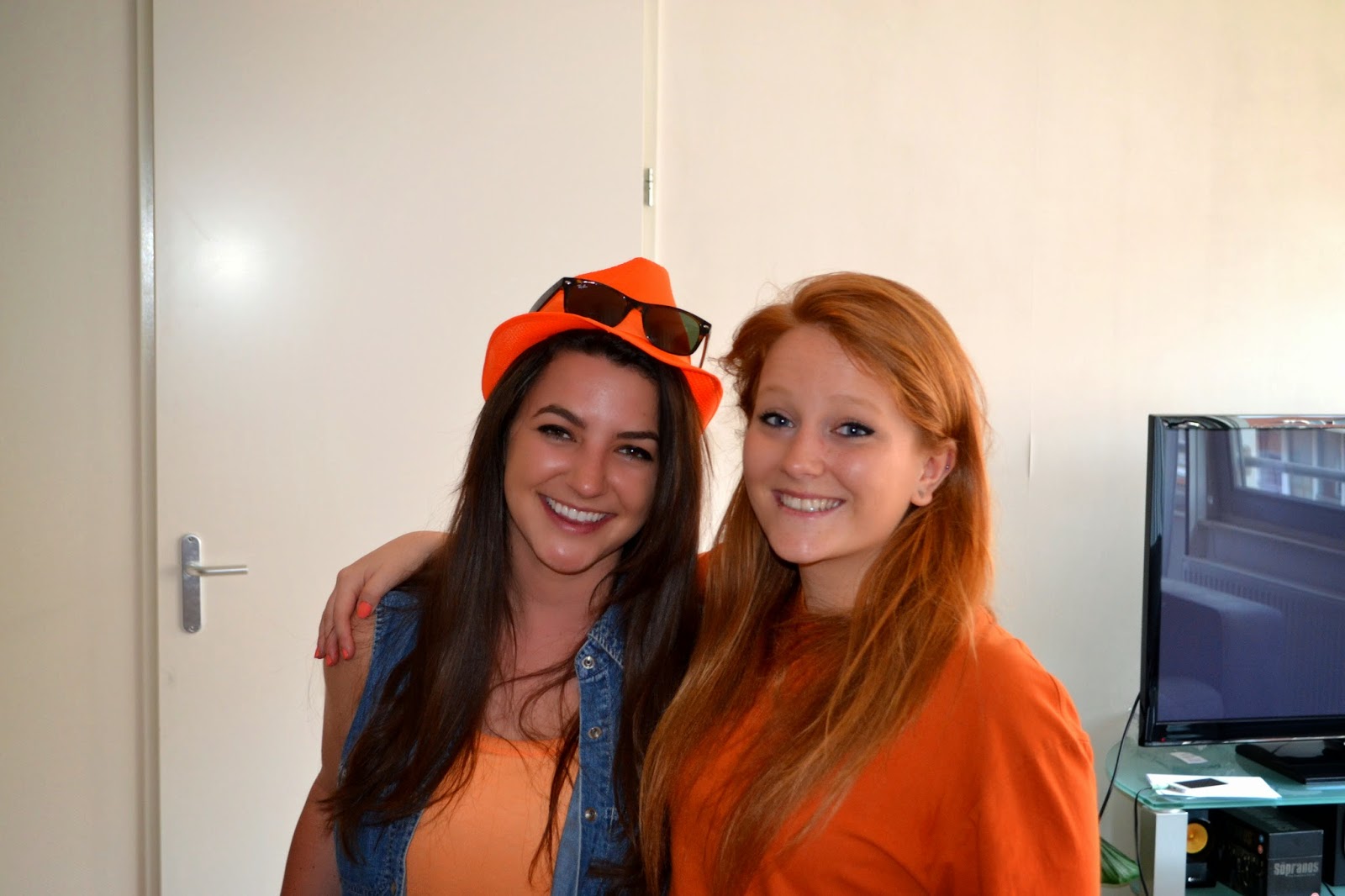 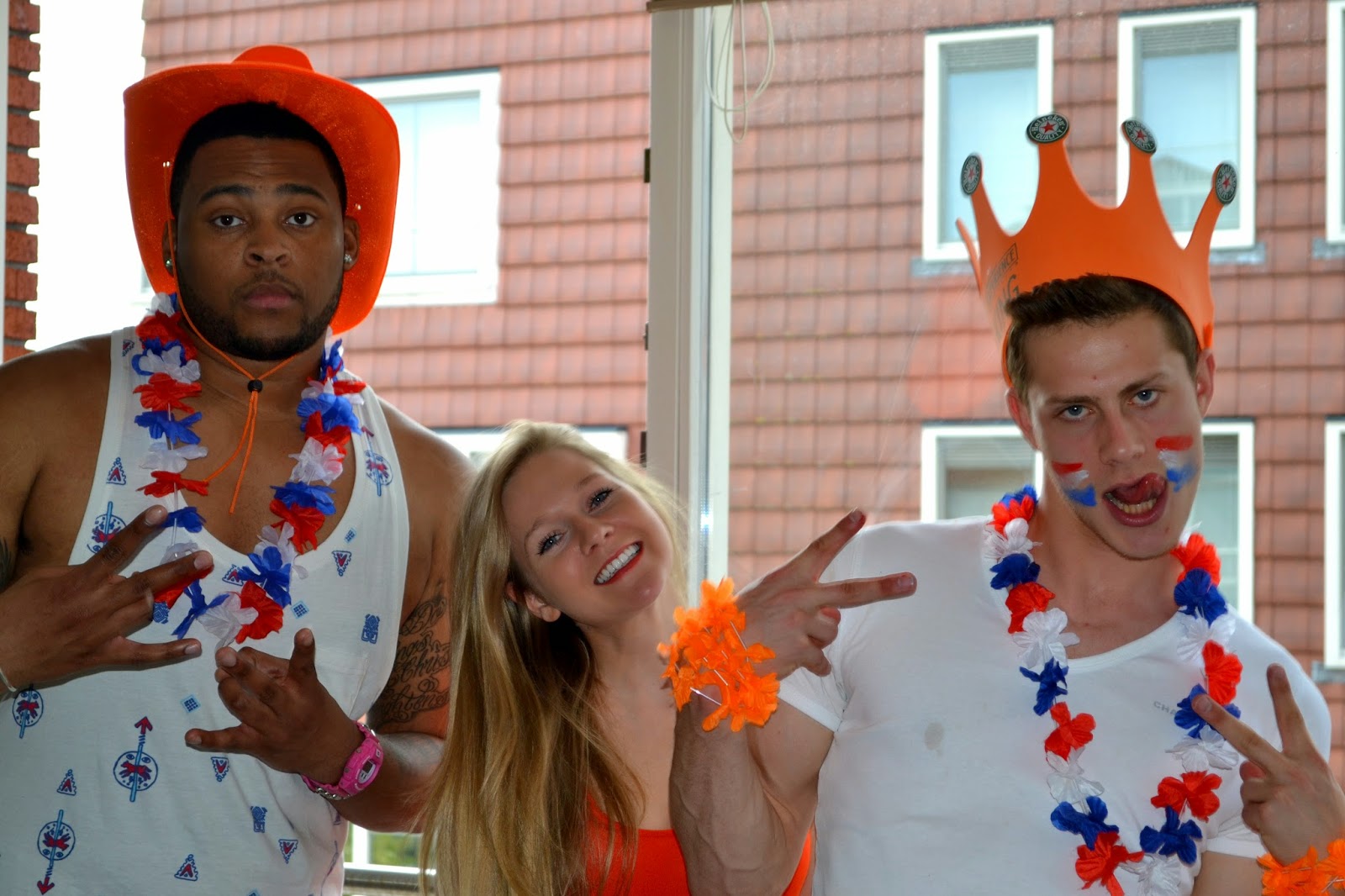 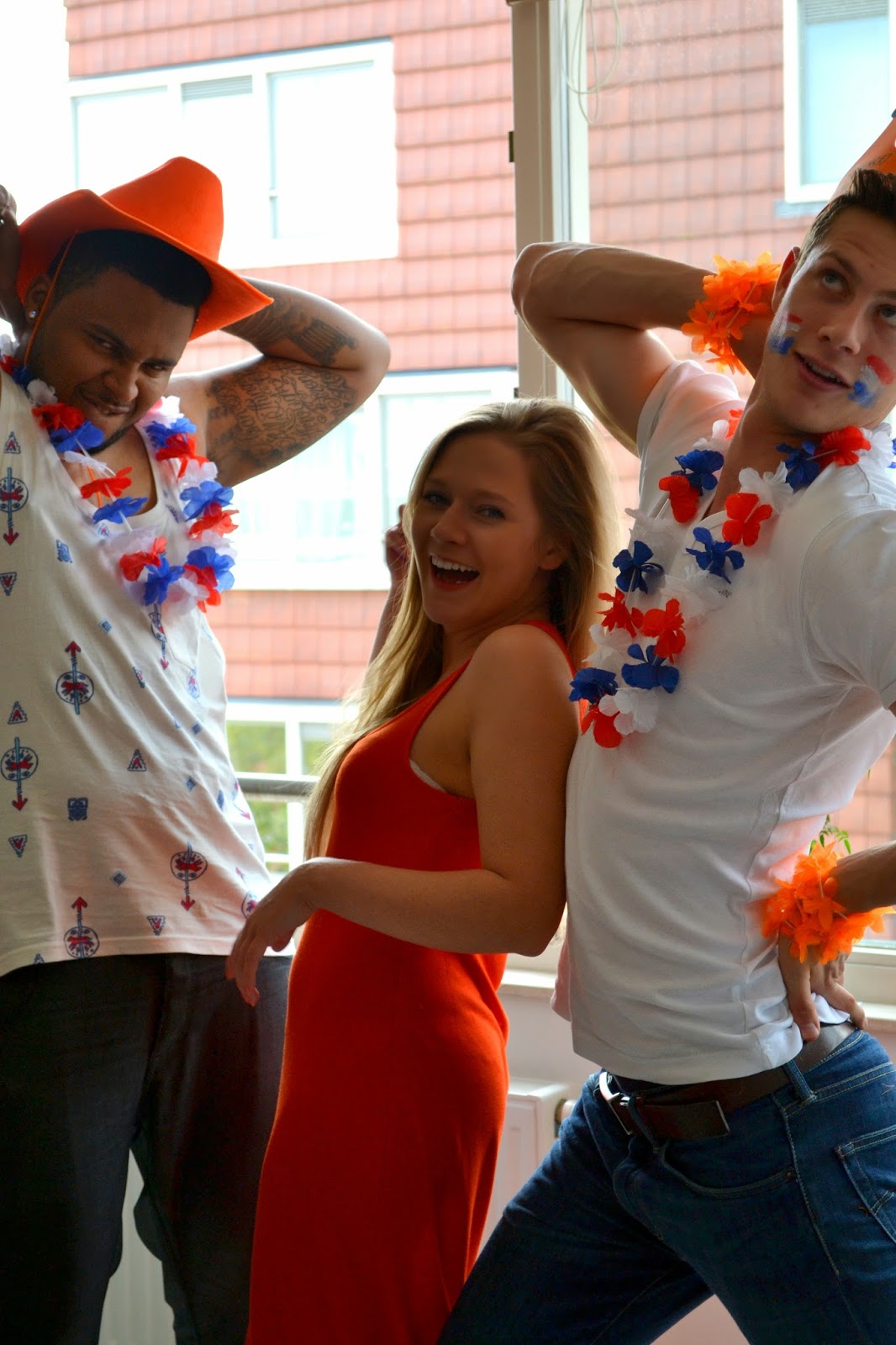 Jaime has always been extremely protective of me, which I am so incredibly thankful for. But, it did mean that when it came time to introduce him to the Gentleman I was slightly nervous. They met way back at my 21st birthday, when Jaime flew over to surprise me. They got on then, but that’s different to staying at someone’s house for 4 days!

I’m not sure why I ever worried… 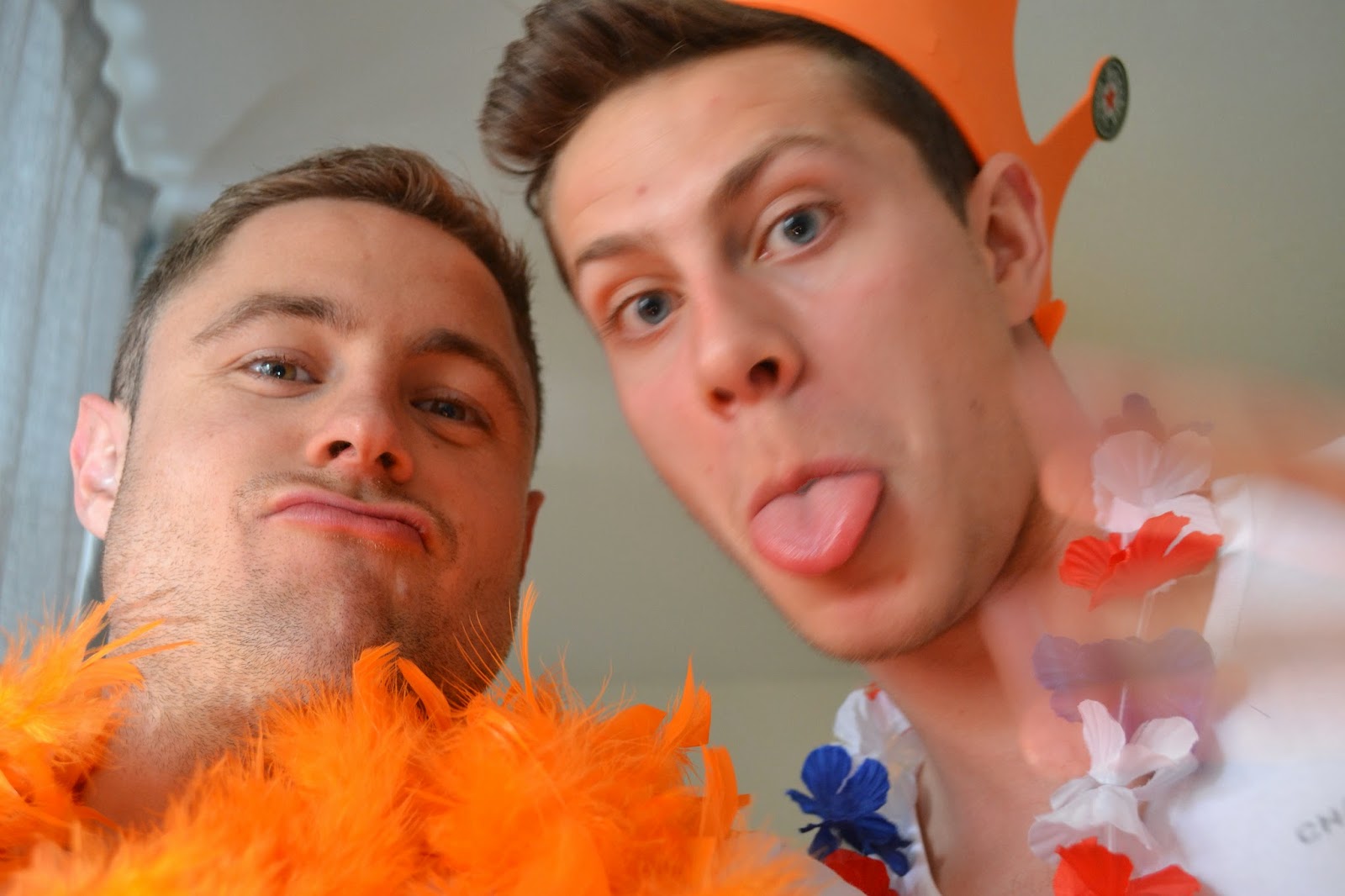 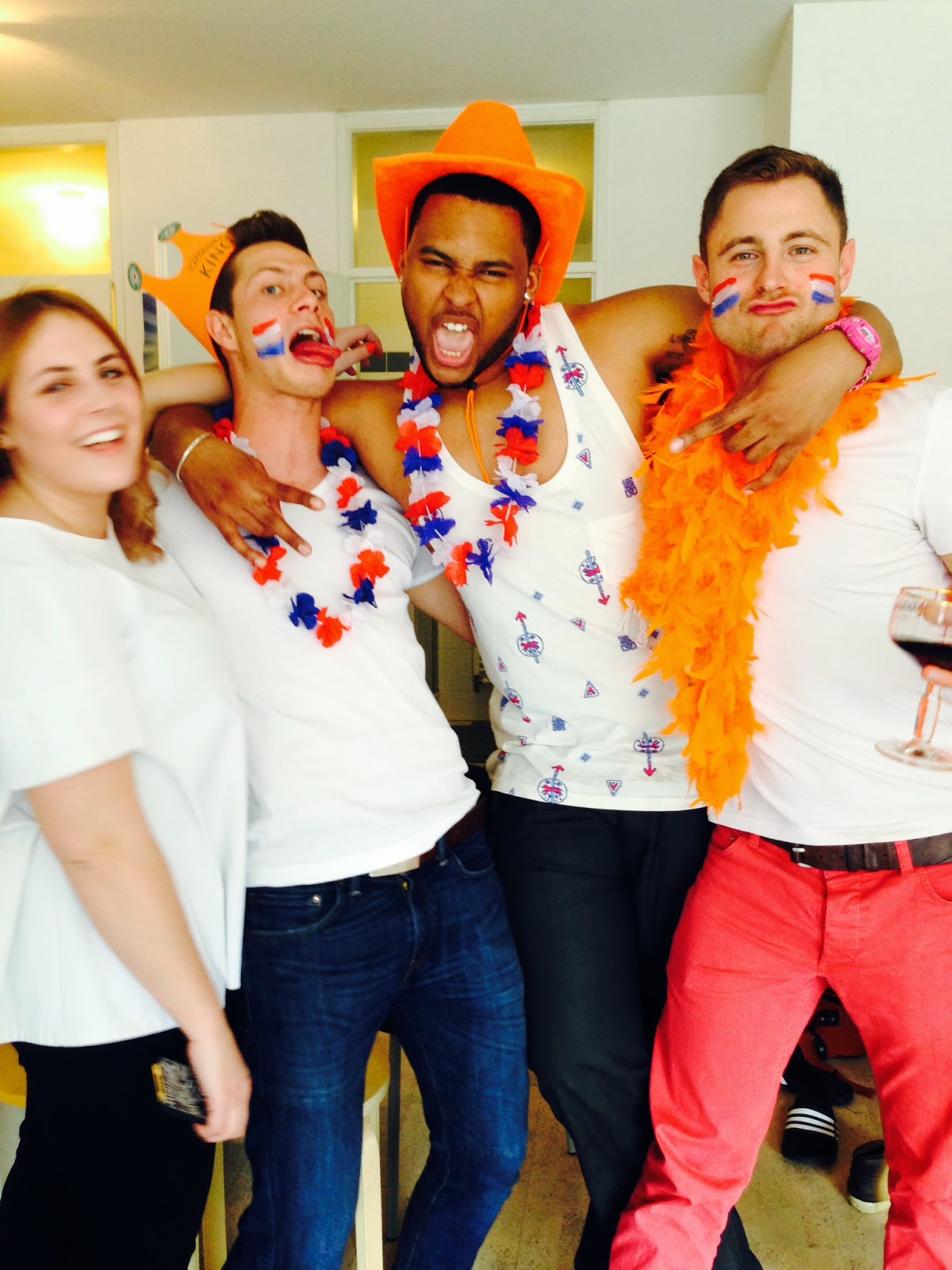 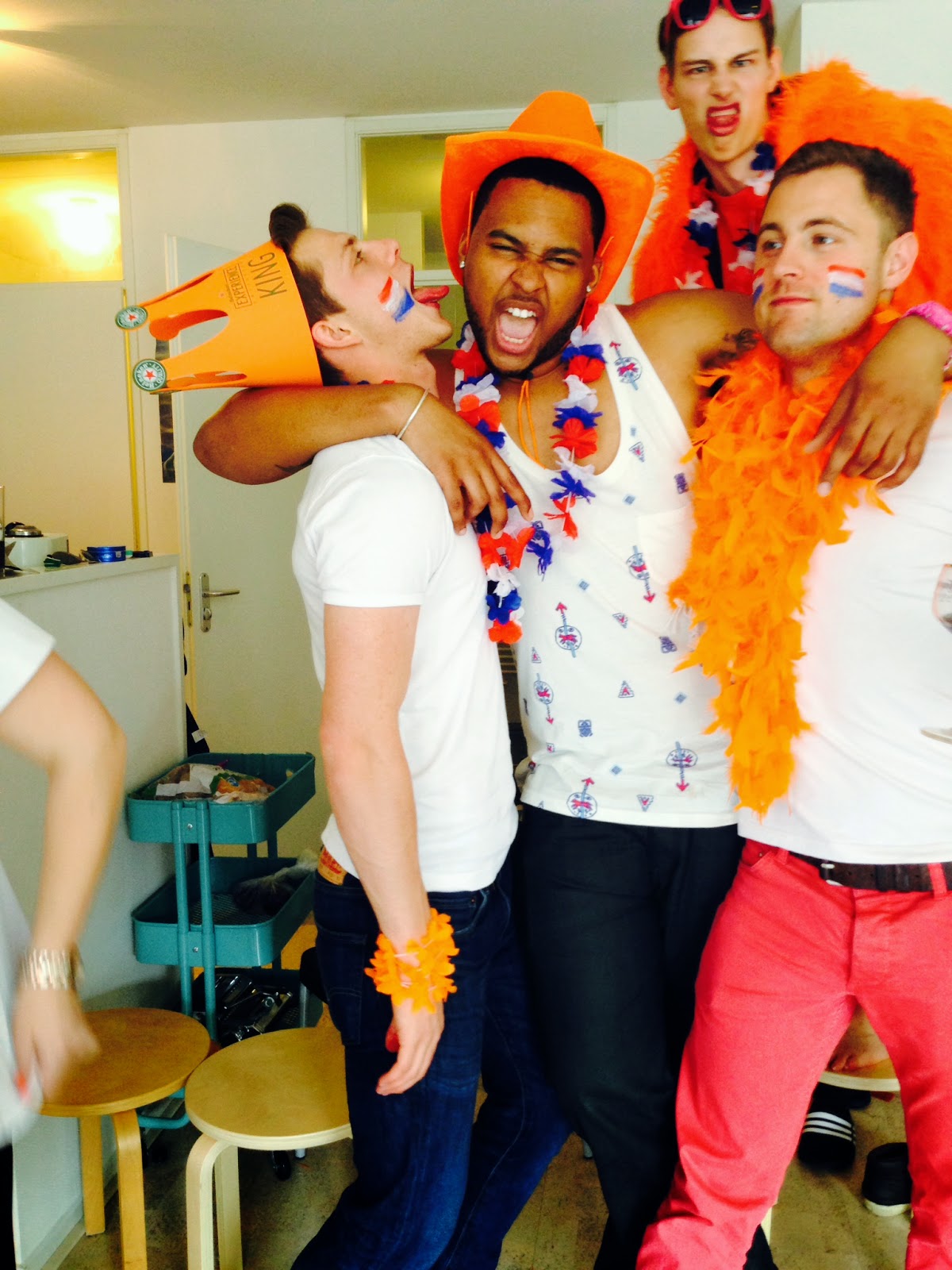 They get on amazingly well, and that couldn’t make me happier! But I digress massively…

The drinking games were underway by about 11am. 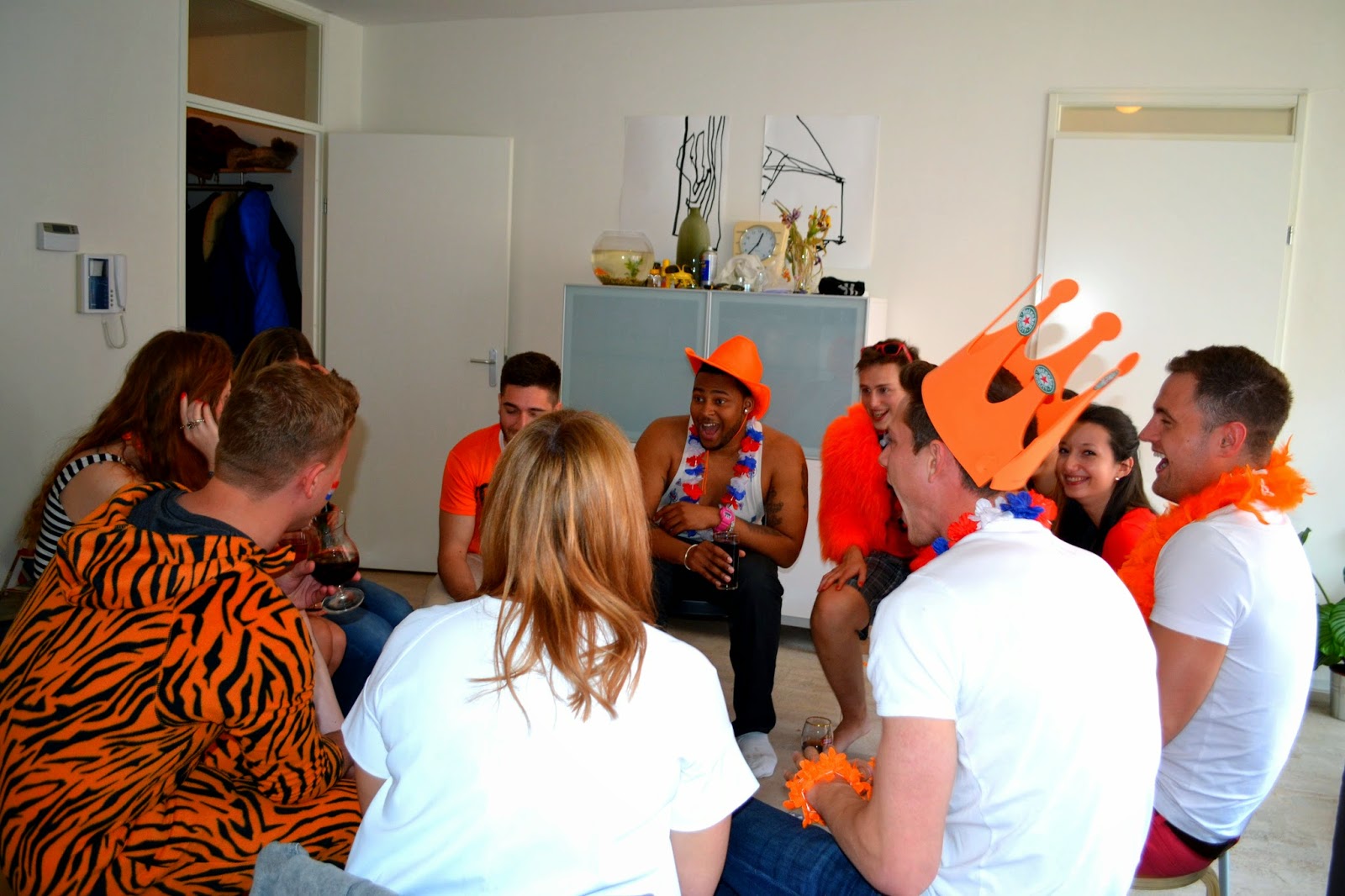 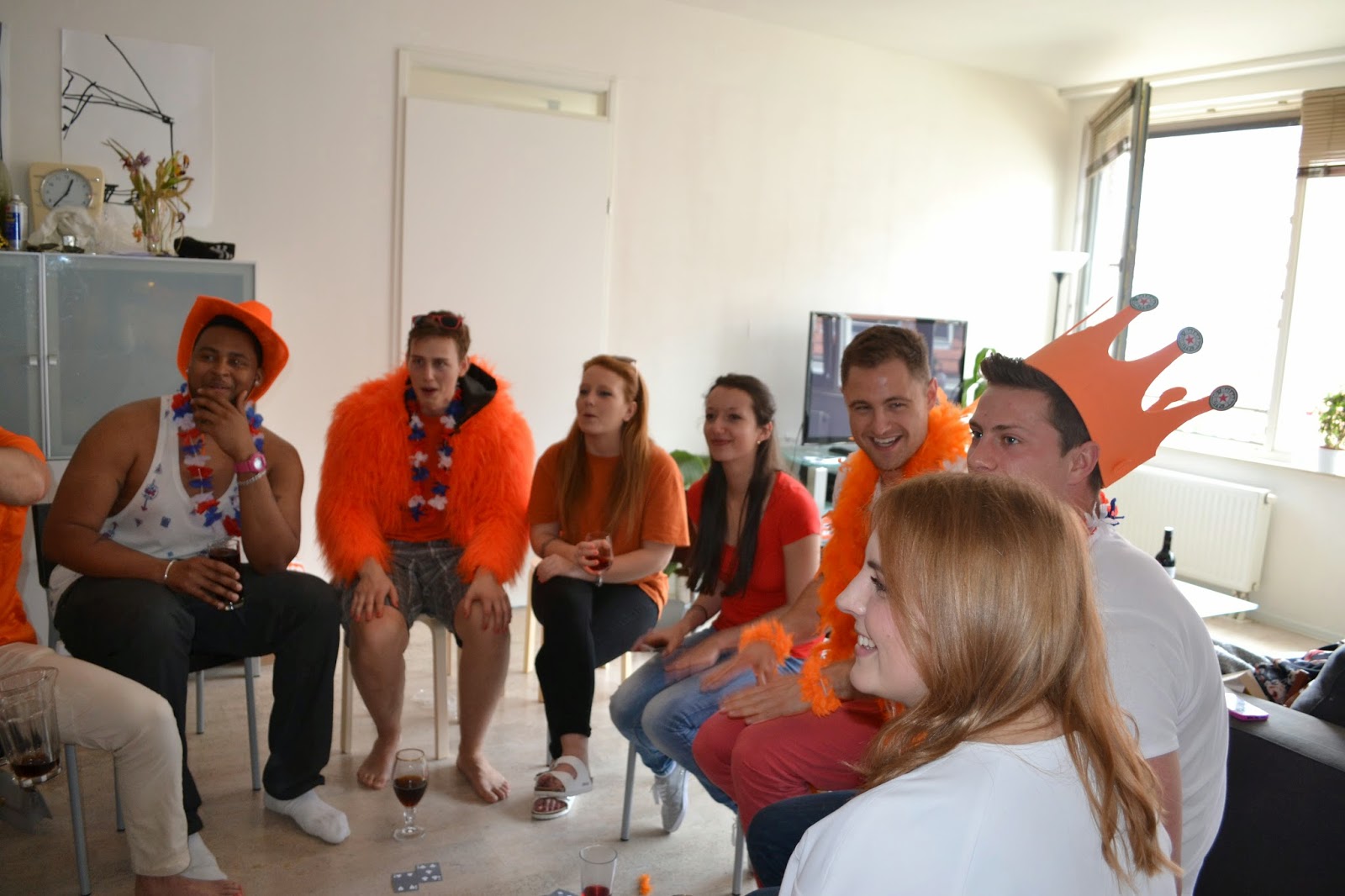 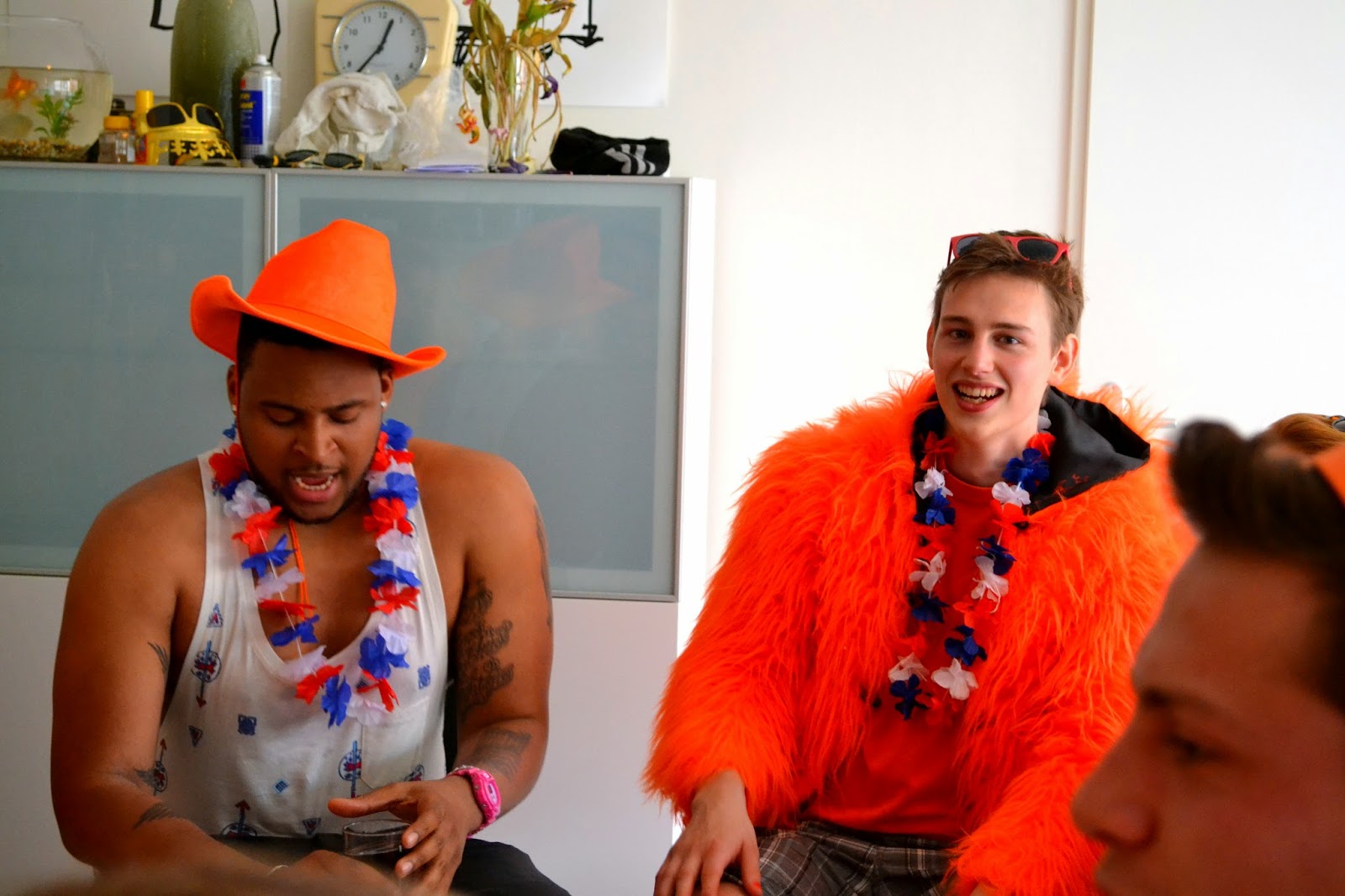 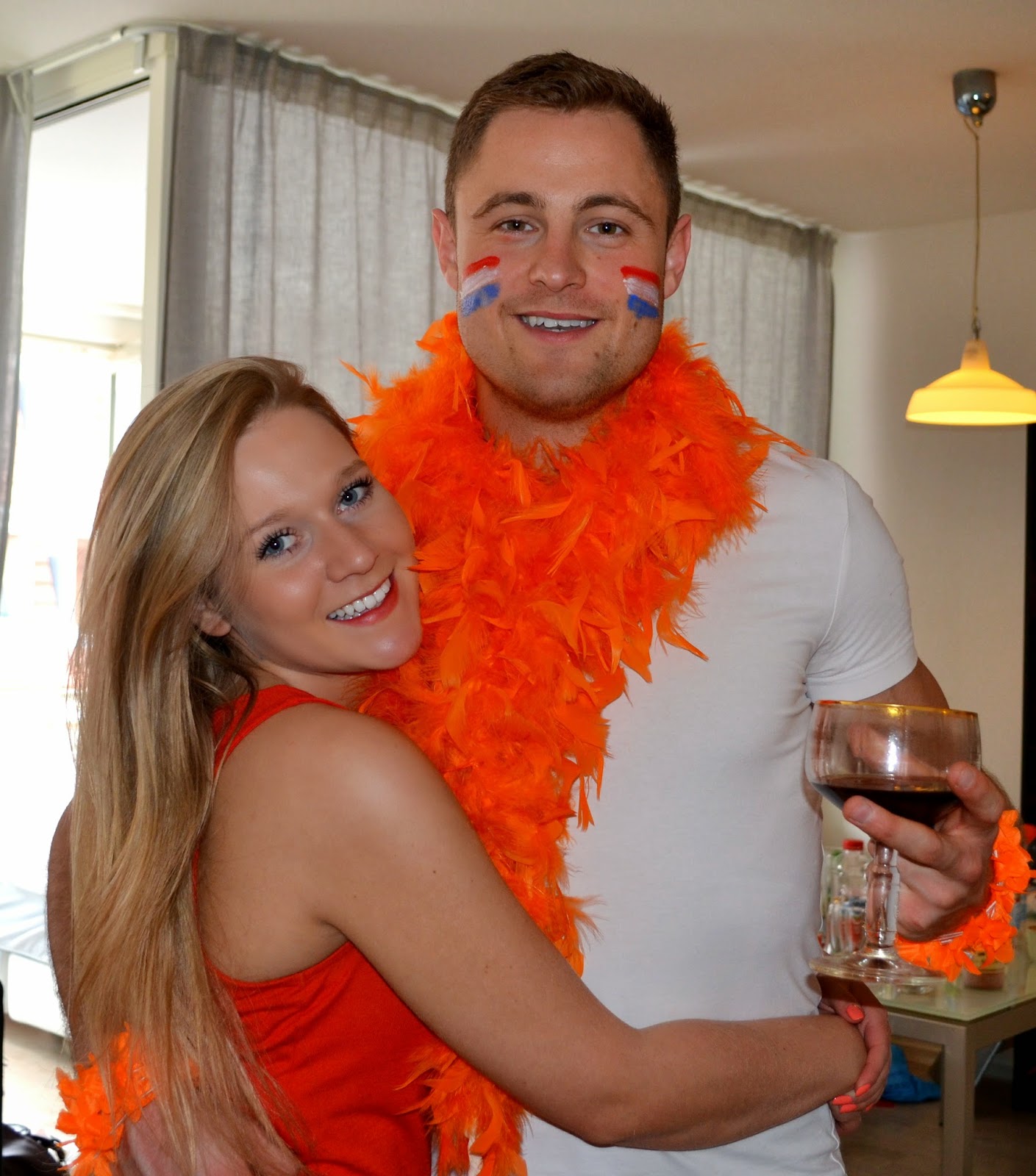 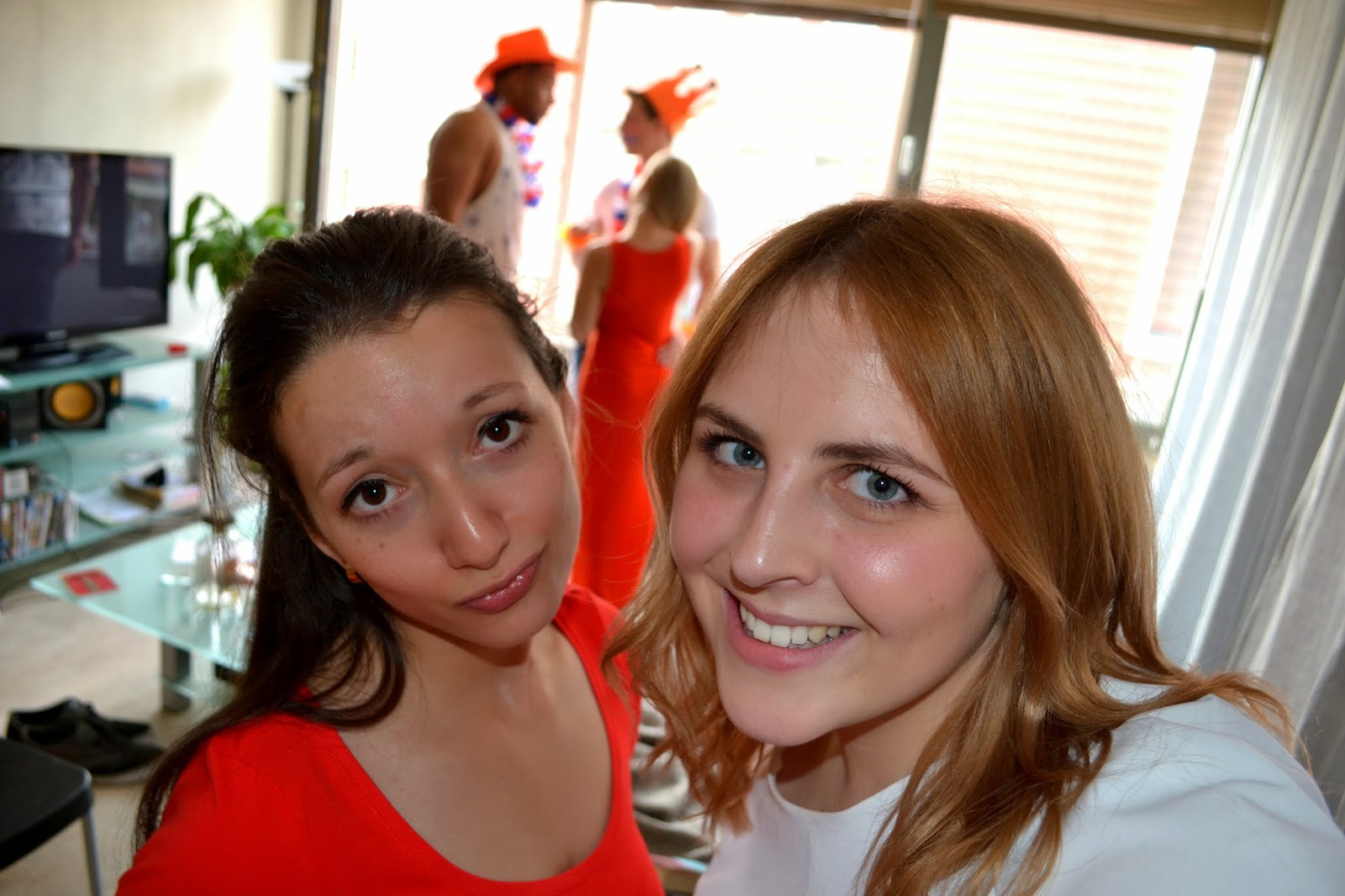 Which only added to the silliness. 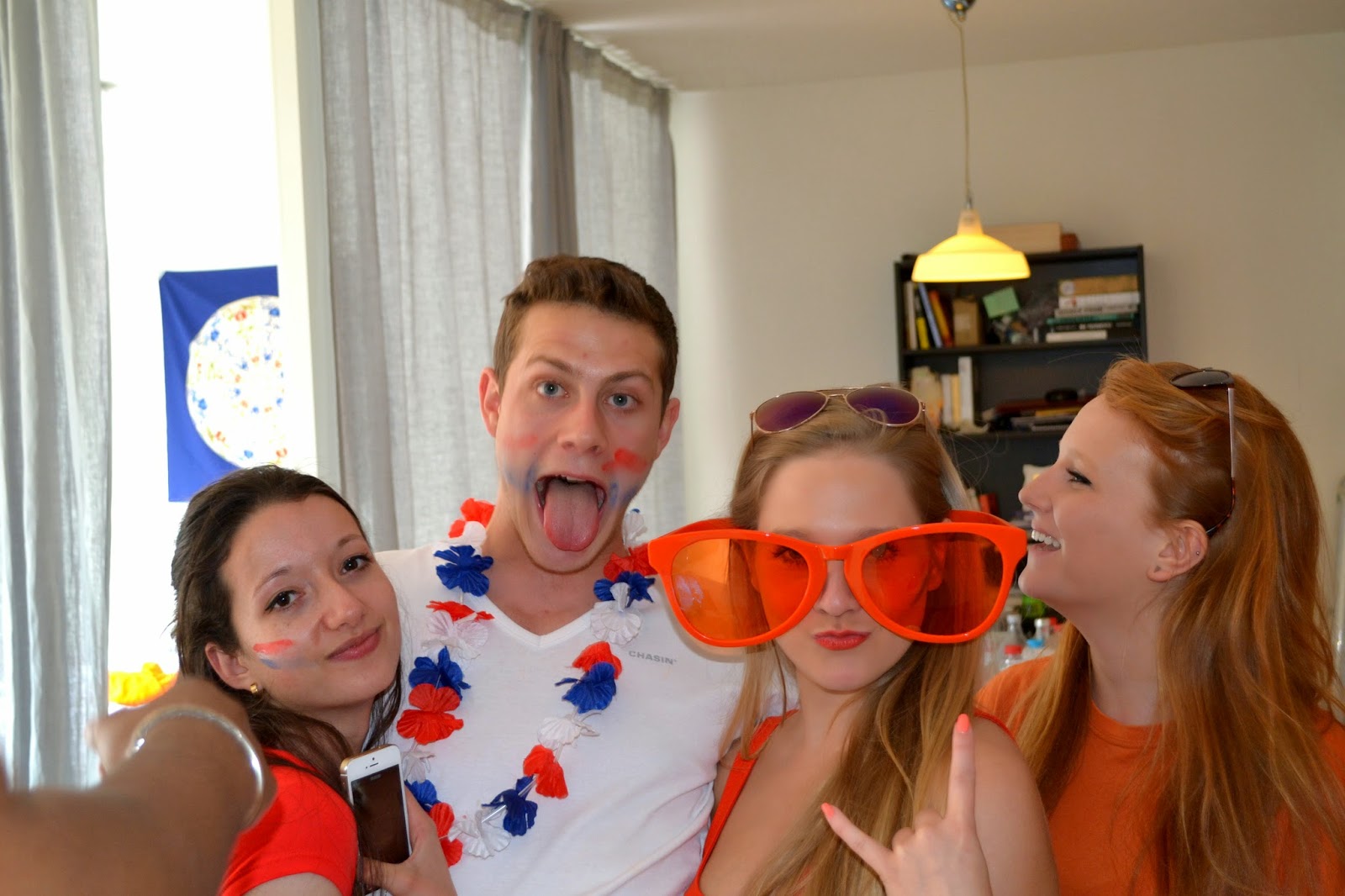 Before long, it was time to head out to join everyone else in the celebrations. We walked the short distance of 100 metres from Jaime’s apartments to the Olympic Stadium that had been transformed! 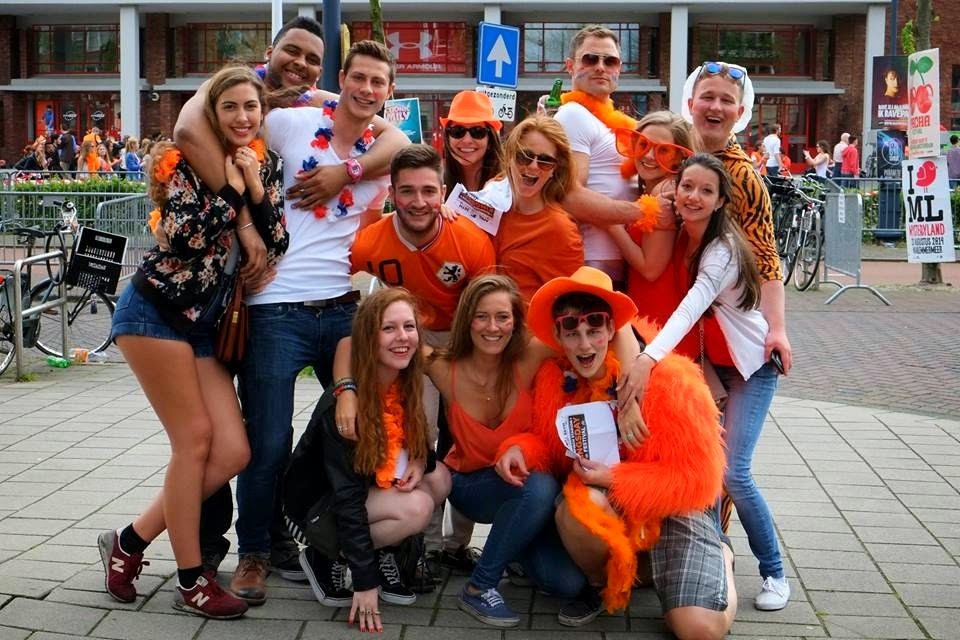 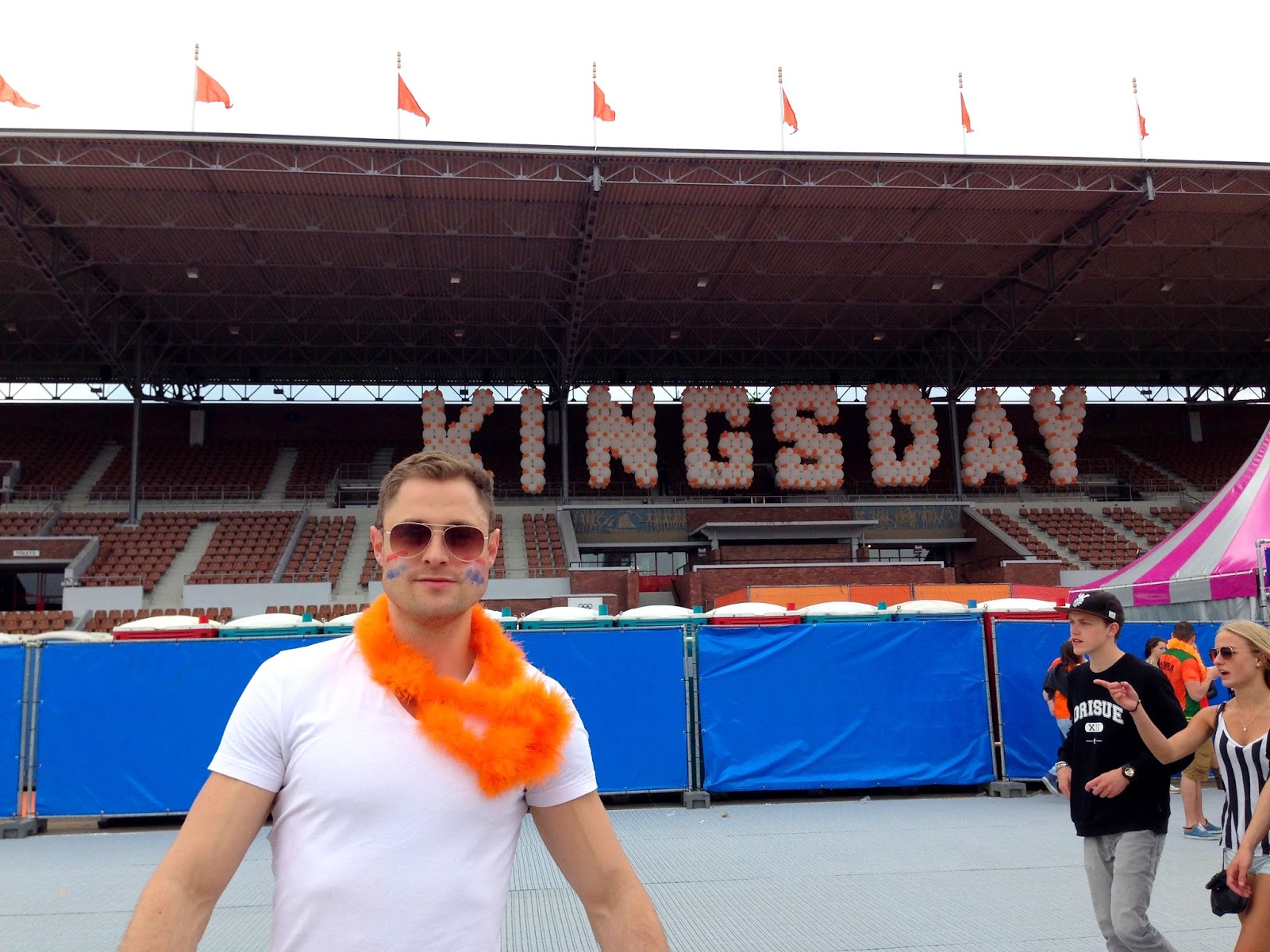 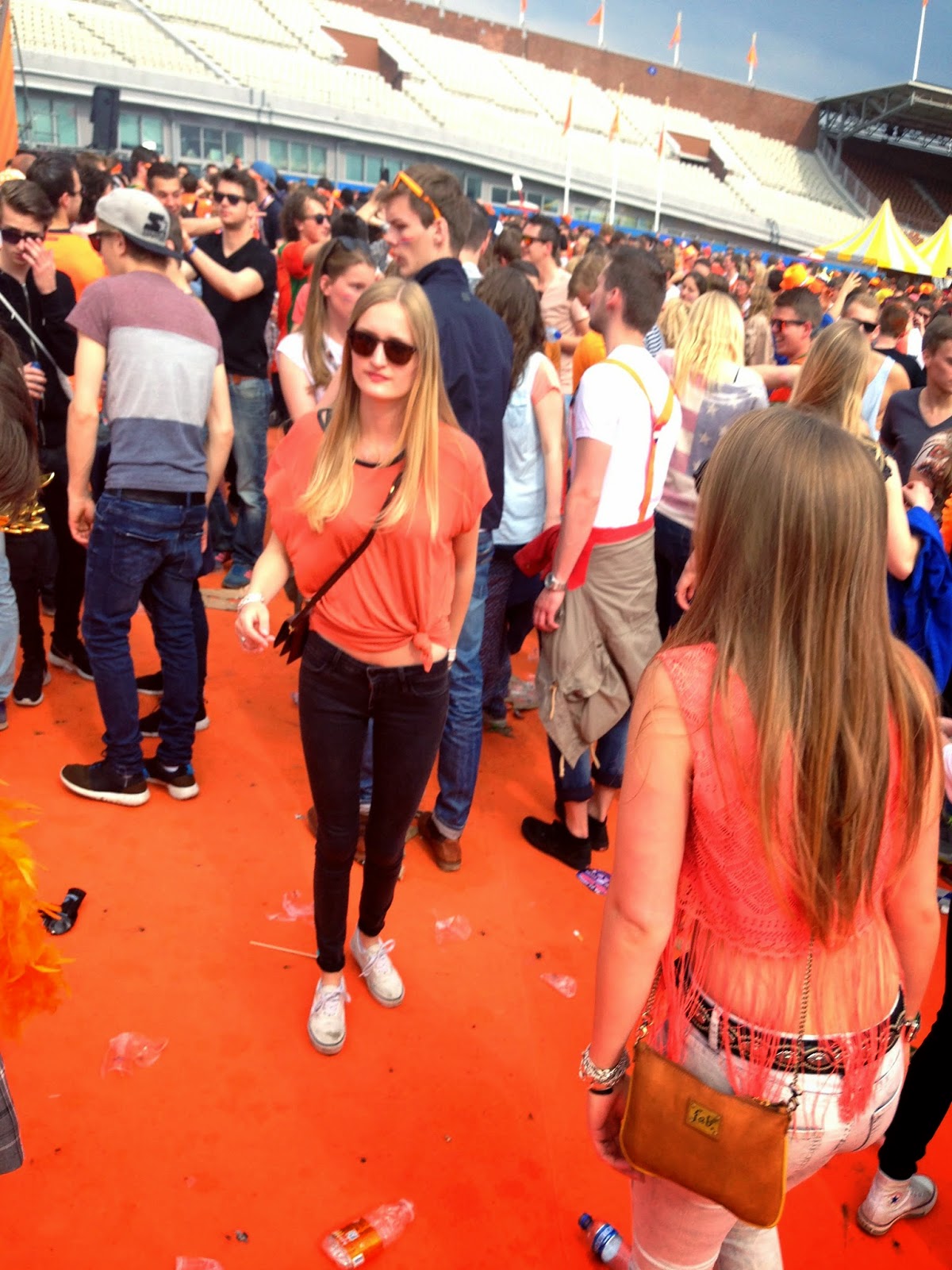 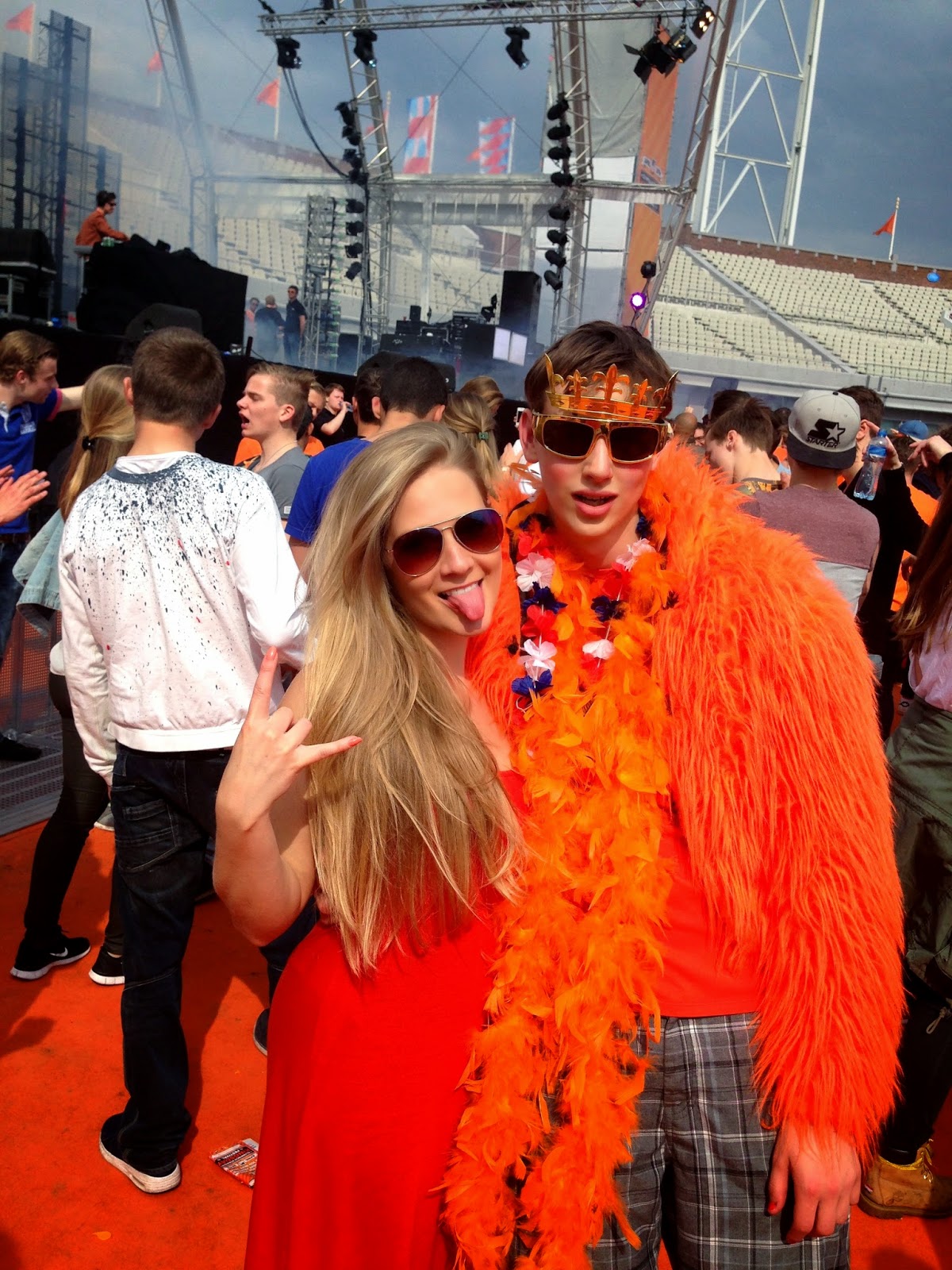 One thing you must remember if you’re ever thinking of attending a Kingsday celebration is that no money is used as tender on the premises. You have to swap your cash for chips at the machines dotted around, and that is your gold for the day. You can trade this for drinks, burgers and ice creams. Although be warned, it’s not cheap!

Before long; we had been dancing, singing along and catching up with friends for hours. I was exhausted as the alcohol and heat of the day set it. Luckily, it wasn’t too long till we were home.

We all ended up chatting, before Jaime, Mich and I decided we should take a nap to re-charge our batteries. 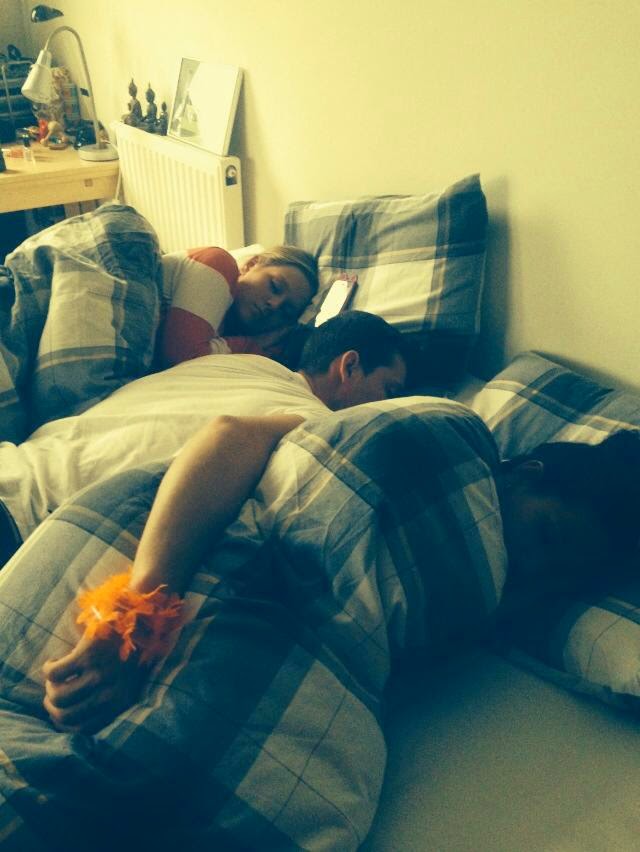 Our alarm failed us however, and we woke up a good 2 hours later to an empty apartment. Everyone had gone out and left us to our little nest. We weren’t too gutted though, the next day was hangover free and an early morning for the day ahead!