One off my best friends has probably one of the coolest jobs, like, EVER.

Tom is a racing car driver/speedboat driver. You’ve met him before when we had our awesome trip to Les Menuires. Tom doesn’t care much for planning, so it’s fairly normal for him to ring me up in the middle of the night on a Friday with the words ‘I’m in Chelsea, come party.’ That’s exactly what happened this Thursday, normally I would jump on the tube and go, but we were all at our local having fun so promised to see him Friday.

Saturday was The Venture Cup launch – a race from London to Jersey via Guernsey and back again arriving into Bournemouth on the 11th June.

Tom is competing in the race, and invited us down on Friday evening for some champagne and to play on the race boats.

We did just that.

My Kurt Geigers had to stay on dry land, to look after my handbag and blazer.

We were told by a rather excitable Tom, that a few hours previously he had had Grid Girls splaying across the front of the boat posing for photos with him…

I thought we didn’t do a bad job.

Tom showed us around the boat, The Gentleman found his spot. 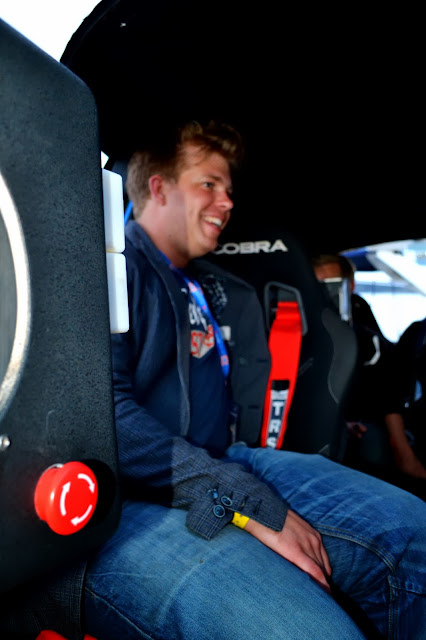 It was such a beautiful evening so we stuck around for some wine and grub.

This HAS to be the best hot dog I’ve ever had.

Tom was tipped to win the race, but unfortunately I came across this tweet while I was following his progress online.

Commiserations to Tom, but good luck to all the other racers! If you want to get in on the action, follow the race online or be at Bournemouth Pier on the 11th June at 13.00 for the grand finish!