In different cultures, you have to learn to respect their different ways of life and traditions. I was invited along to a Malay engagement party, which I eagerly accepted the invite for. However, this was an engagement party with a difference, this was the husbands second wife. It was unclear whether or not the first wife was aware of the proceedings (she wasn’t invited to the engagement party), but I guess she’ll find out soon enough when they’re all living together!

So anyway, John a few neighbours and I all piled into the car and off we went to the Kampung (or countryside villages). We drove over to the Mainland and carried on driving until the towns gave way to rice fields and green. It was on the way that we discovered John’s next-door neighbour was the ring bearer, and we pulled up outside a flower shop.

A Malay woman pulled open my door, said “hello” and dumped a basket of fruit and flowers on my lap. We drove for about an hour like this, finding every second completely hilarious. 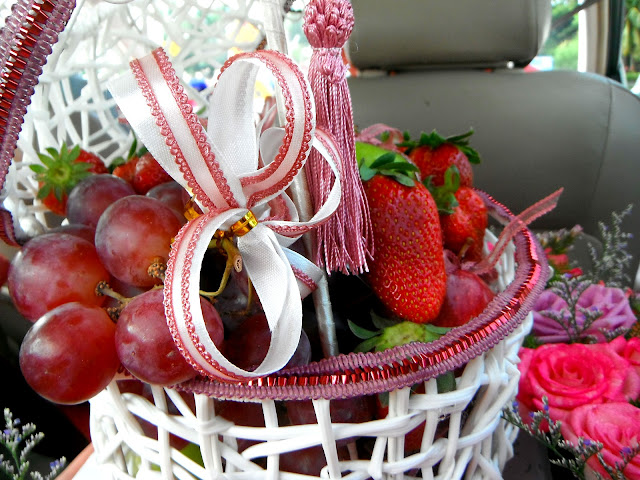 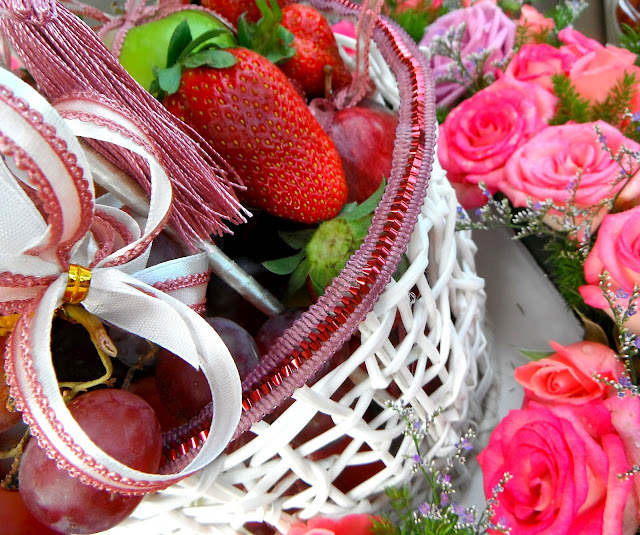 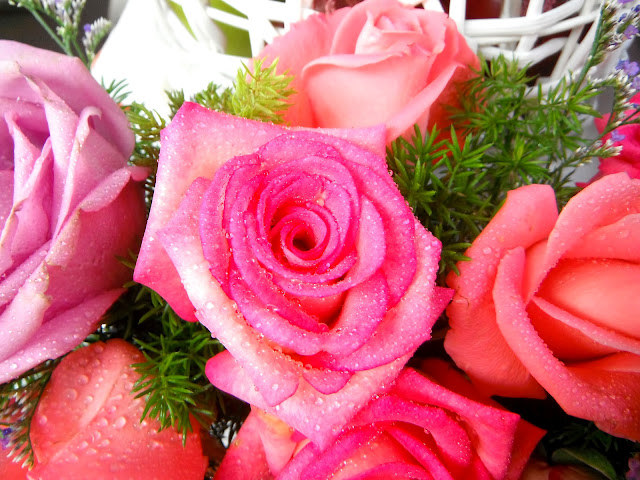 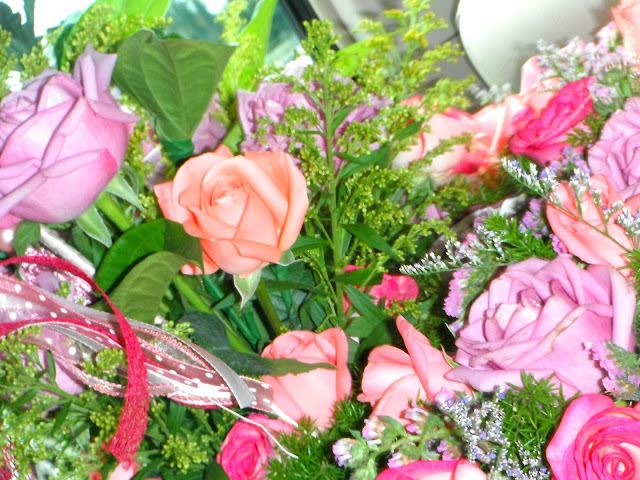 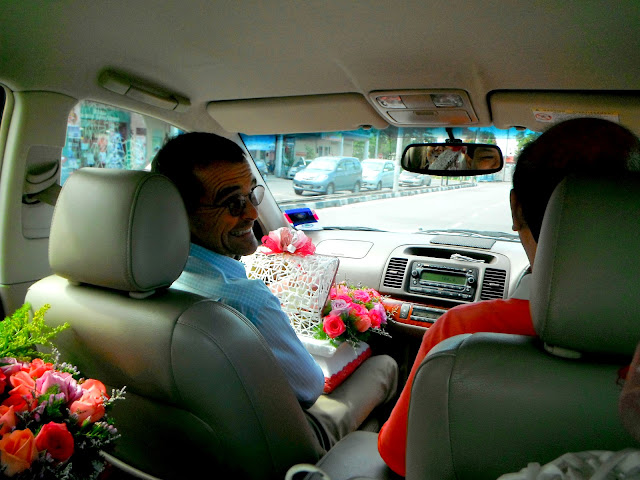 I clutched the door of the car, and momentarily let go of the fruit basket, as we crossed a bridge that shook with the weight of the car. Definitely in the Kampung. 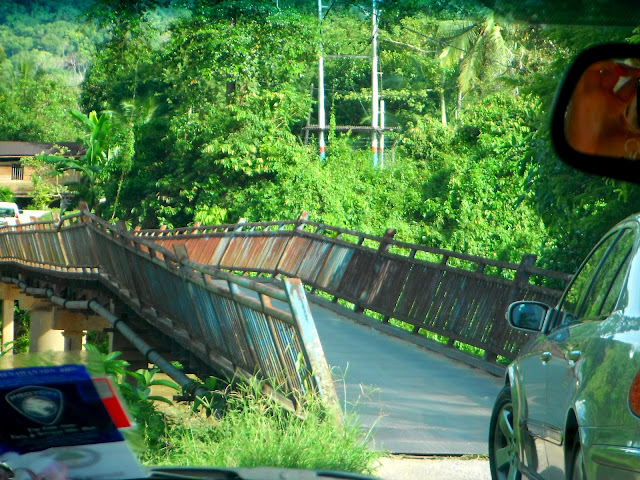 The ceremony began and was spoken entirely in Malay, by the men. There was praying, and singing, and a huge blur of conversation. Finally, with a blessing from the Bride’s mother, she appeared. She didn’t speak a word as she walked out of the bedroom and took a seat on what can only be described as a handmade stage. The rings were exchanged, while the mother of the Bride and the mother of the Groom both gave their blessings and then tea was served. Plates of food were spread across the floor, along with cups of tea and bowls of cake. I was encouraged to eat and drink my bodyweight in food and tea and had to put my hands up in surrender. 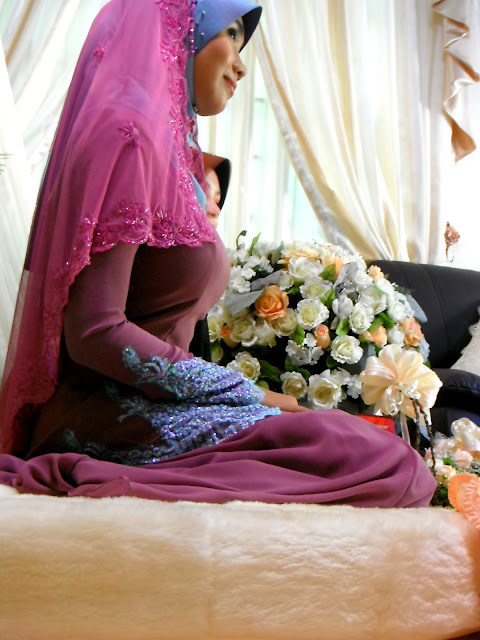 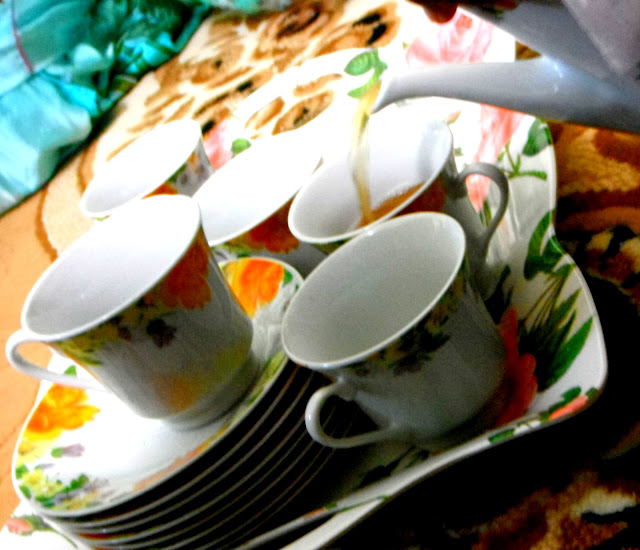 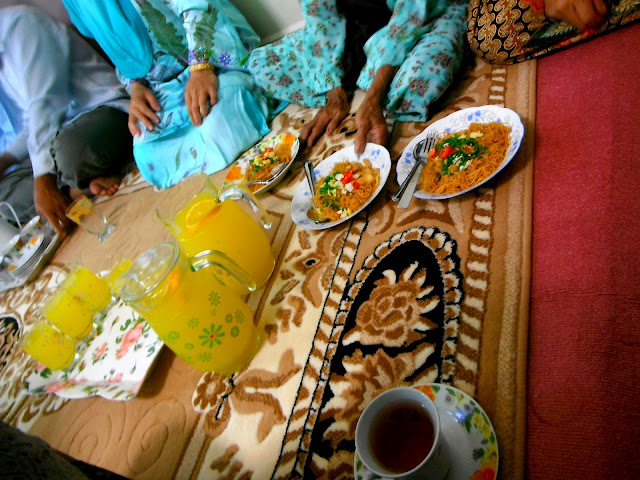 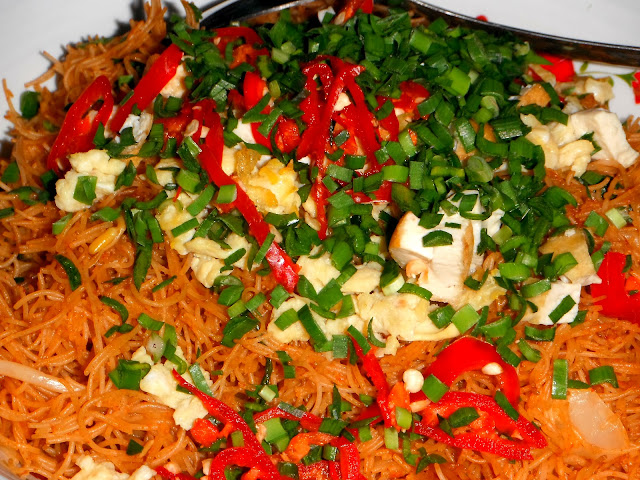 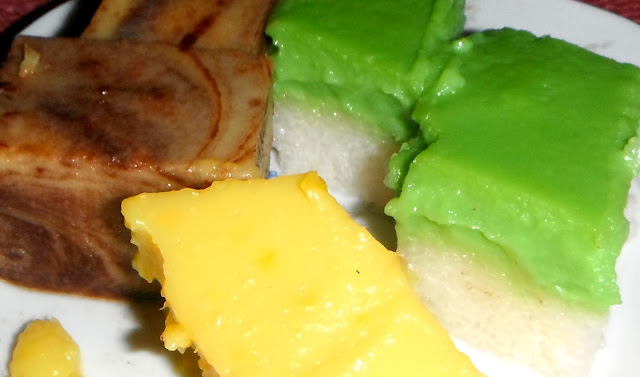 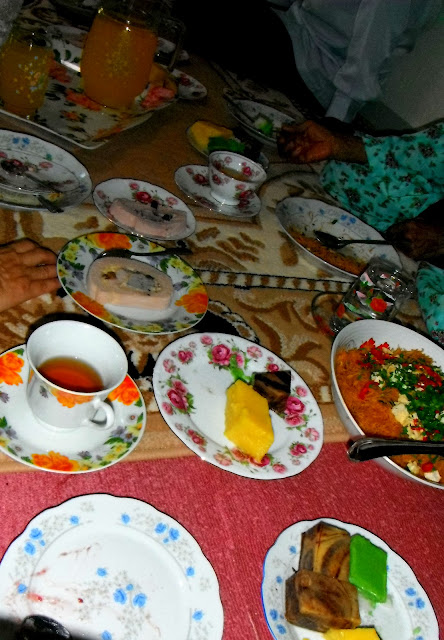 People seemed to disappear when they had had their fill of food and drink and the poor Bride was still sitting on the stage, quiet as a mouse allowing people to have their photo taken with her. She called me over, and what followed was what can only be described as a full blown photoshoot. What I came to realise in Malaysia, is that having blonde hair and blue eyes was something that the people only really saw in films. Therefore, I am now featuring in hundreds of other people’s photos. Anyway so the Bride-to-be and I posed  and smiled whilst about five people blinded us with flashes. 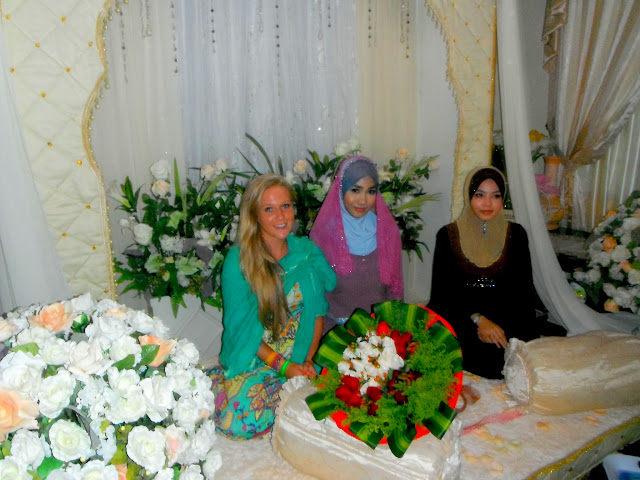 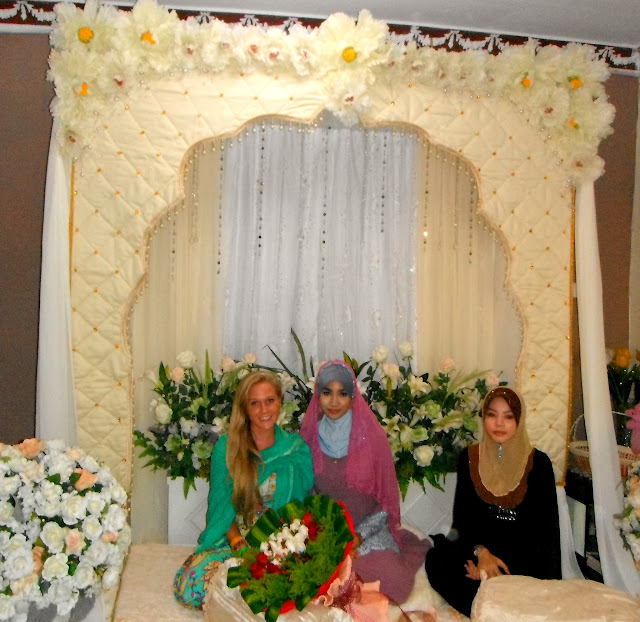 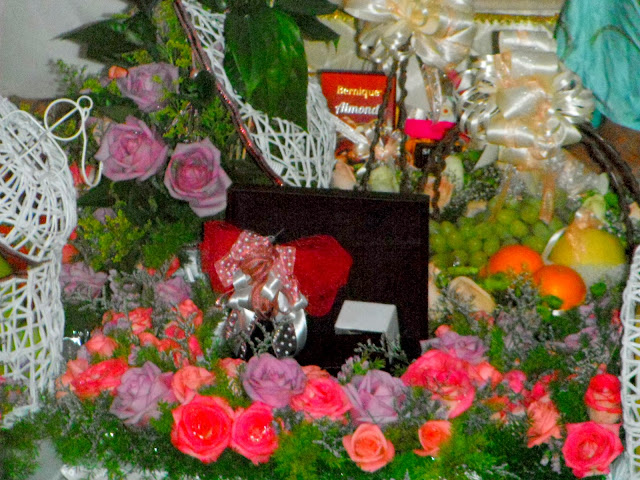 When it was time to go, the Bride and her family thanked us for coming and handed over baskets of fruit and  flowers to us. Well, I wasn’t complaining! I thanked all of the family for their hospitality and we set off on the long journey back to Penang. 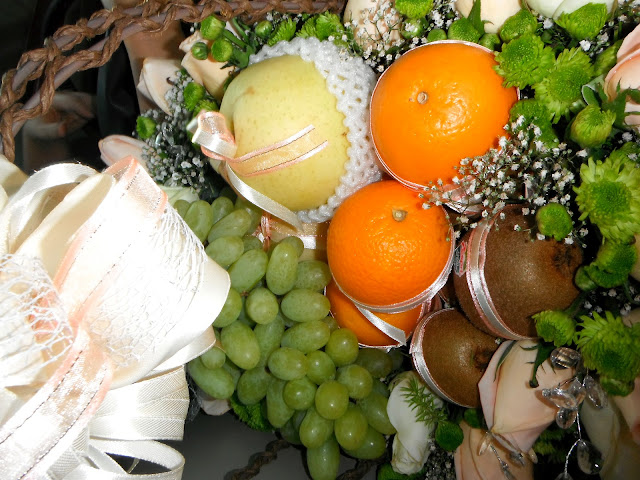 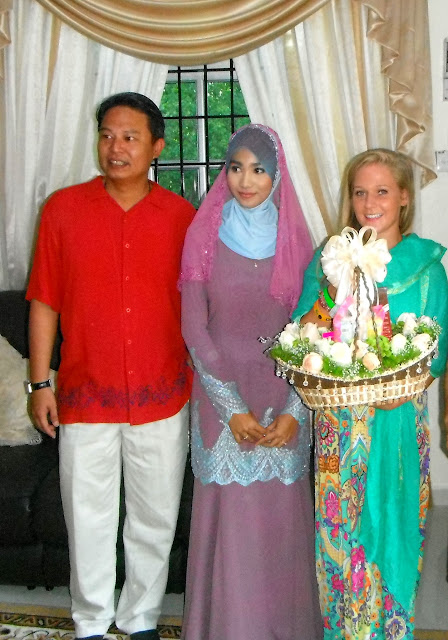 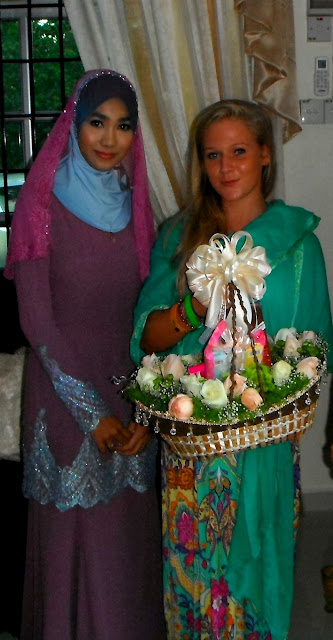 It was a beautiful day, and the Bride-to-be and Groom-to-be looked incredibly happy together. However beautiful it was though, I couldn’t get my head around the second marriage thing. In my opinion if you marry someone, you’re saying that they are the one person you can’t live without and want to spend the rest of your life with. I said this in the car on the way back, and asked whether the Bride would be allowed to marry a second husband too. Apparently that’s forbidden and I thanked my lucky stars that I live in a society where men and women are treated as equals.