Almost instantly when I landed in Penang, an island off mainland Malaysia, my hearing came back. My ears stopped hurting, and I felt better already.

Despite the fact that it was raining and 10pm at night, I was happy. I met my Godfather’s wife, Chee, at the airport and we drove home. After a bite to eat I climbed into bed. Not without noticing however, that I hadn’t seen marble floors or a proper bathroom with walk-in shower since I’d been in England. With that thought, I drifted off and didn’t wake up until 11am the next day.

As John (my Godfather) was halfway round the country, Chee decided to take me out for the day.

We went across to the ‘Old Town,’ grabbing some street food on the way. It’s like a walking cinema, or a history tour, except more exciting. And with FOOD! Sounds like my perfect day really! Chee, growing up in Penang, knew everything about everything. We paced the roads, the various temples and landmarks were pointed out to me as we went. 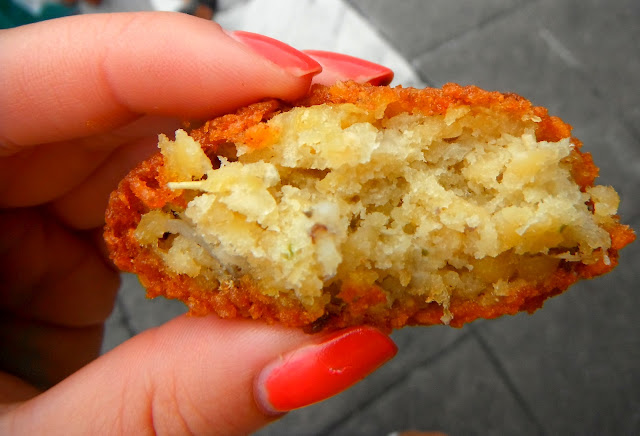 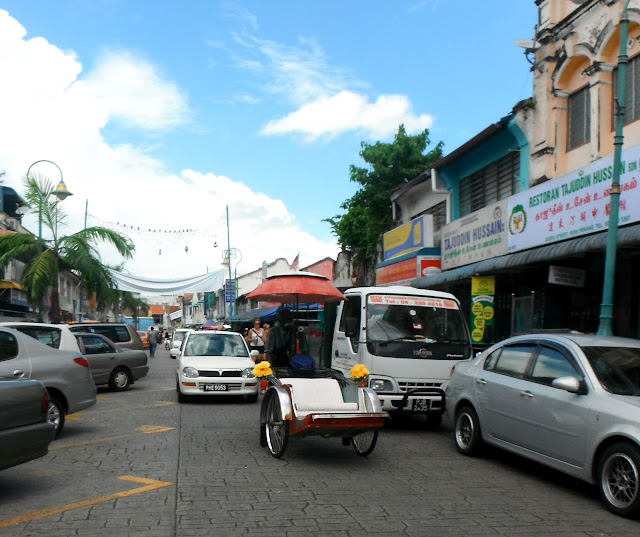 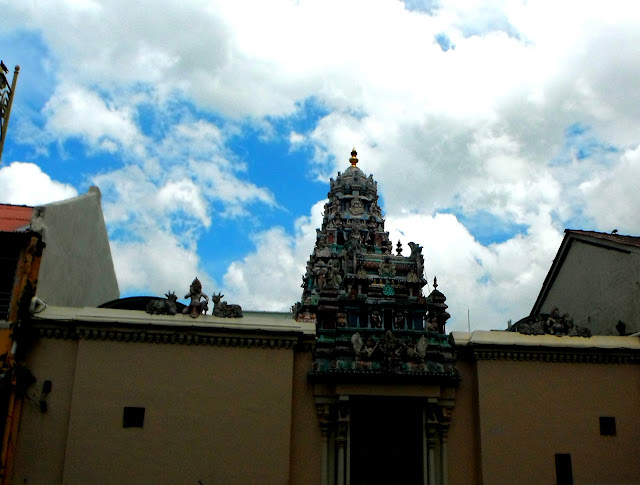 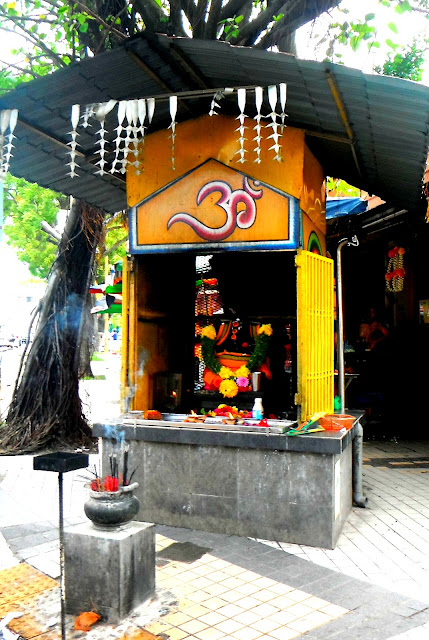 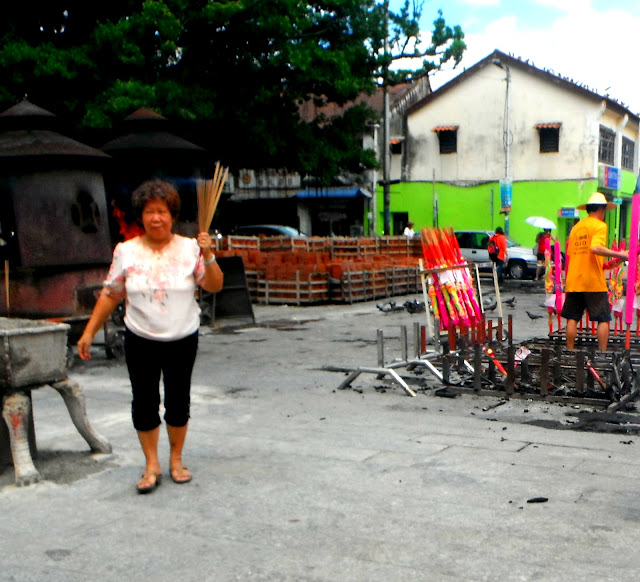 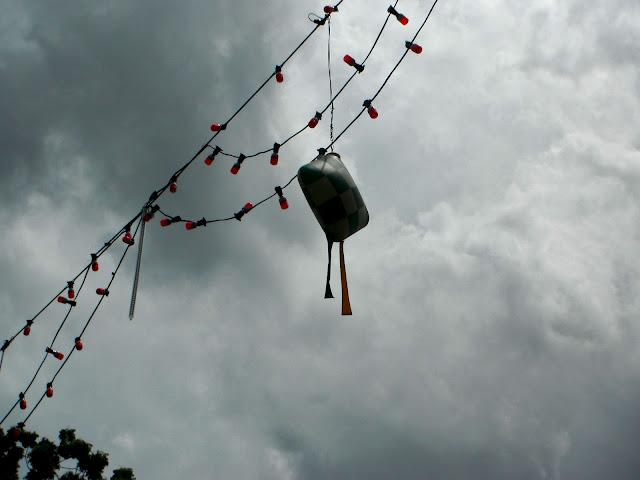 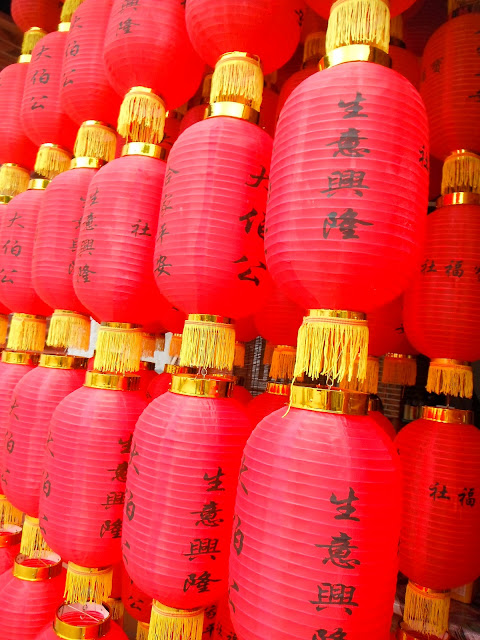 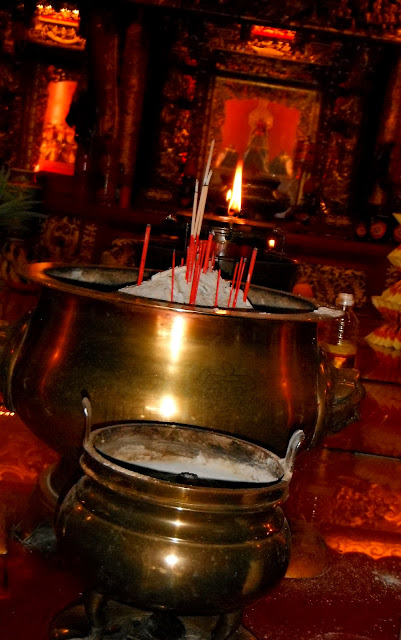 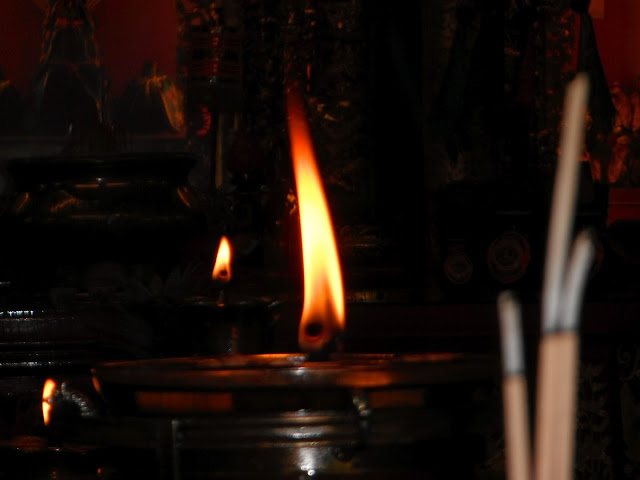 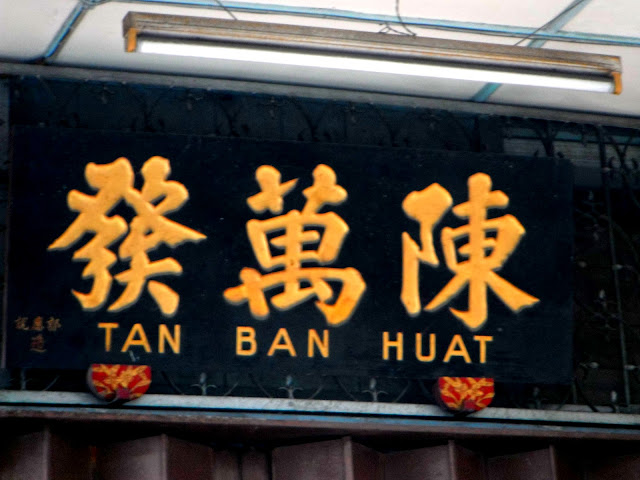 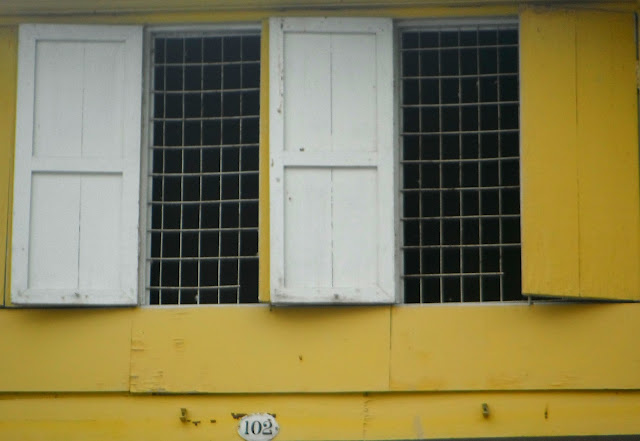 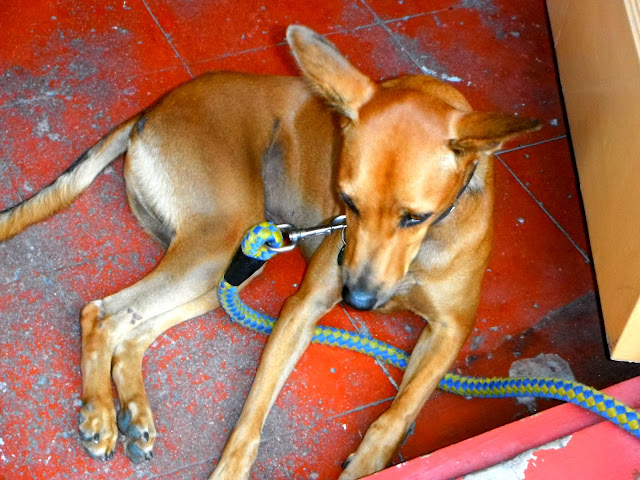 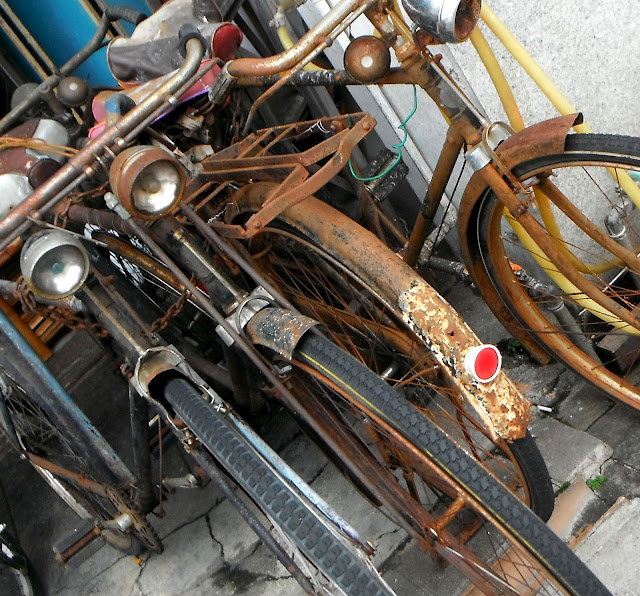 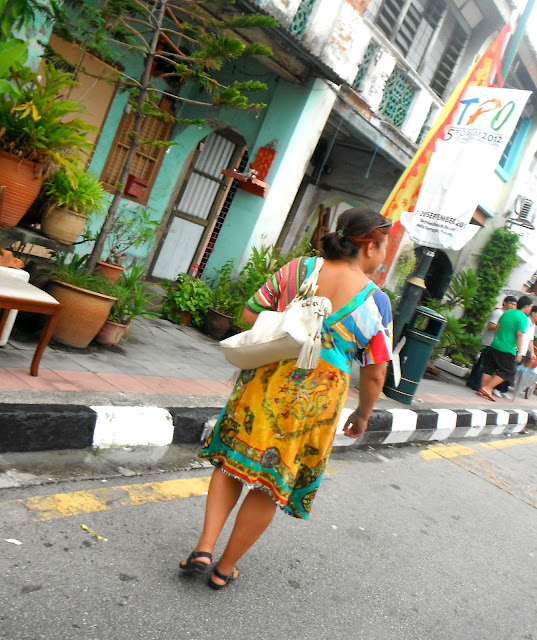 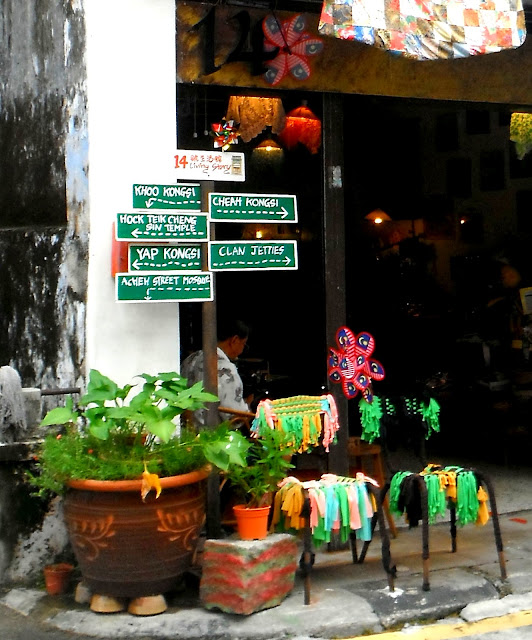 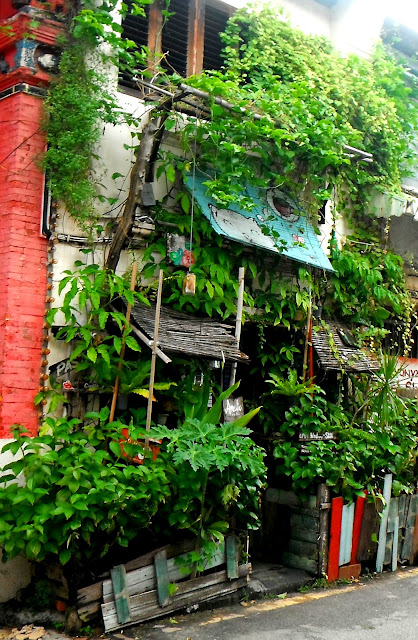 Culture is thirsty work, the first place we came across that sold water also happened to be a medicine shop. From the gist I got, (Malay isn’t my strongest language…) the guy that runs it is a doctor. He’d been running the shop most of his life, before him it was his father’s shop. You go to him with any sort of problem and he whips you up a potion that cures you. His shop was full of lotions and potions and plants and animals, the eye of newt, wing of bat sort of thing. 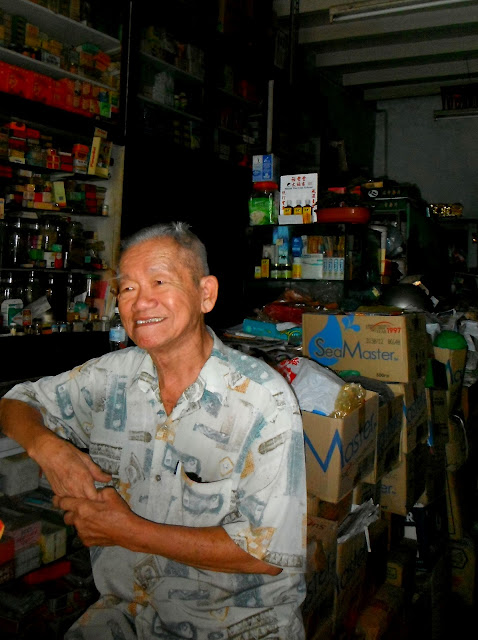 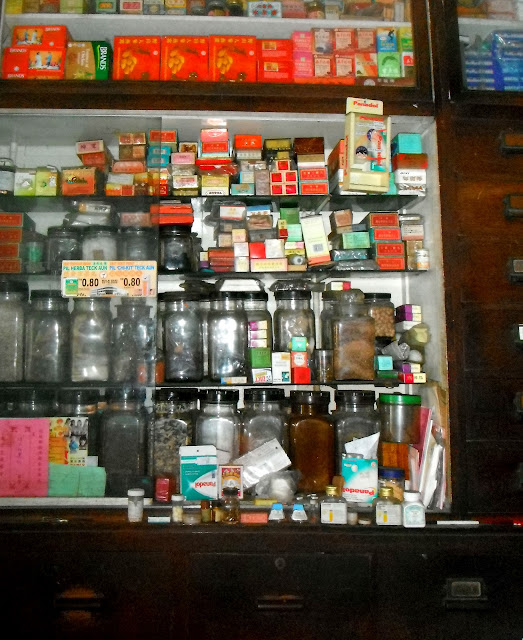 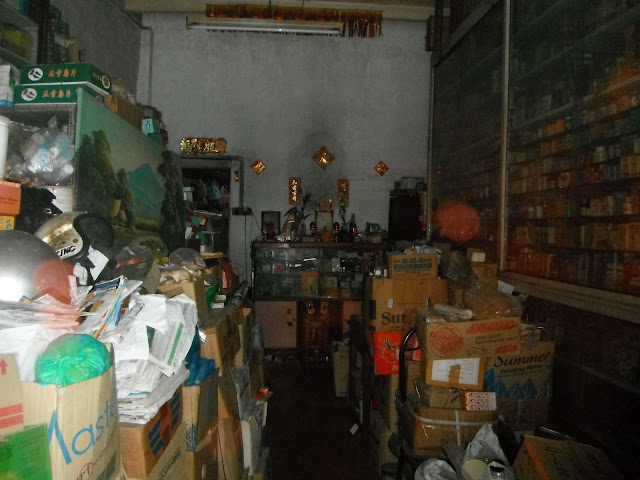 Walking through the Old Town, we came across hundreds of hidden gems. A dusty shop front gave way to a store filled to the brim with beautiful hand made wooden furniture, or a mini art gallery, or a woman sitting on a stool making her own fabrics. The quiet streets hiding little secrets, sometimes you just have to look past the dusty cover.

Chee told me she was taking me to see the Jewel of Penang, my eyes widened as I tried to imagine what kind of precious stone could be named after an entire island.

It turns out, however, that the Jewel of Penang is actually a Unesco World Heritage Site and definitely more interesting than a stone. Known to most as the Leong San Tong Khoo Kongsi clanhouse (phewww well done for saying that, took me a few attempts), it consists of the clanhouse, an opera stage, the courtyard, a museum dedicated to the history of the Khoo clan and four rows of residential terrace houses.

The Khoo family were among the wealthy Straits Chinese traders of the 17th century Malacca and early Penang. In the 19th century, the clan complex resembled a mini family village with social, educational, financial and welfare organisations as well as its own self-government.

The forefathers of the Khoo clan, who emigrated from South China, built the temple as a clanhouse for members of the Khoo family in 1851. However, (apparently) it was struck by lightening and burnt down in 1894. The Chinese believed that this was provoked by the gods due to its resemblance to the Emperor’s Palace. In 1906 the clanhouse re-opened, in a scaled down manor (so as not to make any more gods mad). This was when the Khoo clan was at the height of wealth and respect in Penang society.

I’ll show you around.

Unfortunately, the battery in my camera was starting to go at this point so I took what I could. 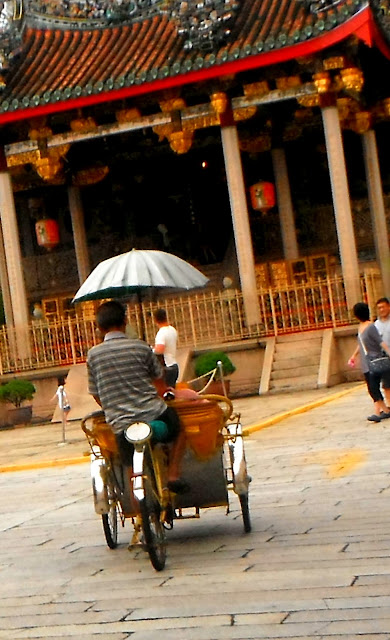 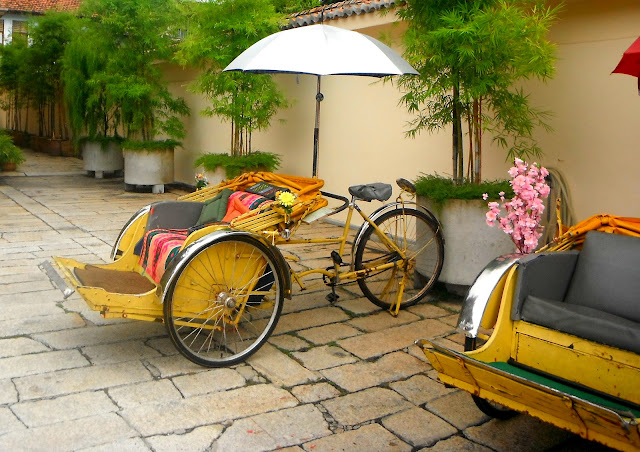 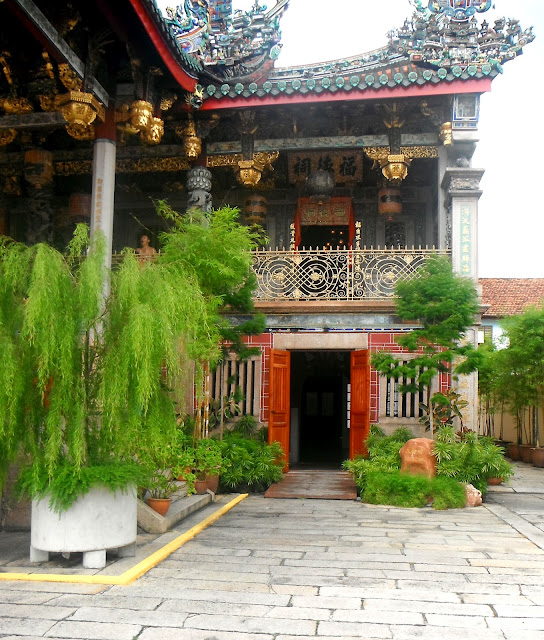 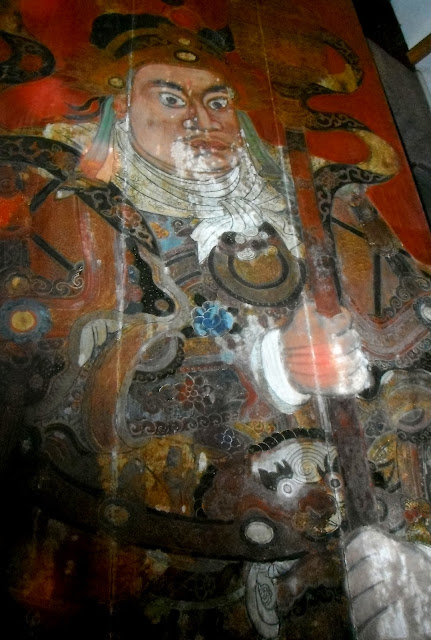 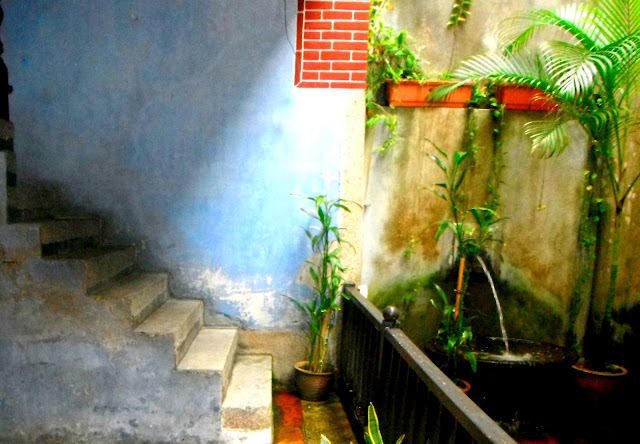 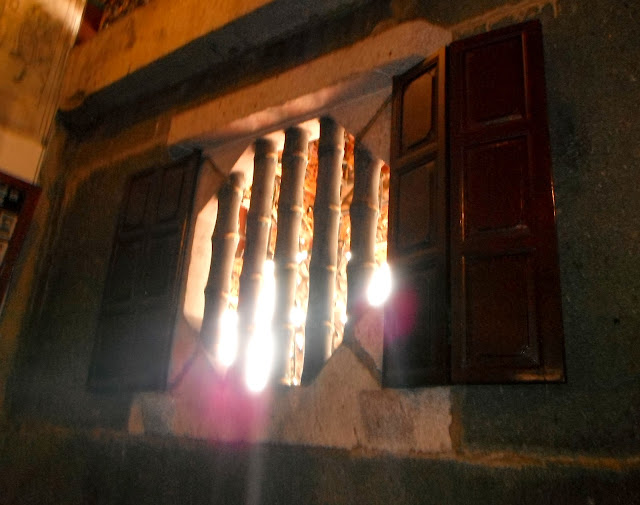 A wall painting of just some of the gods. 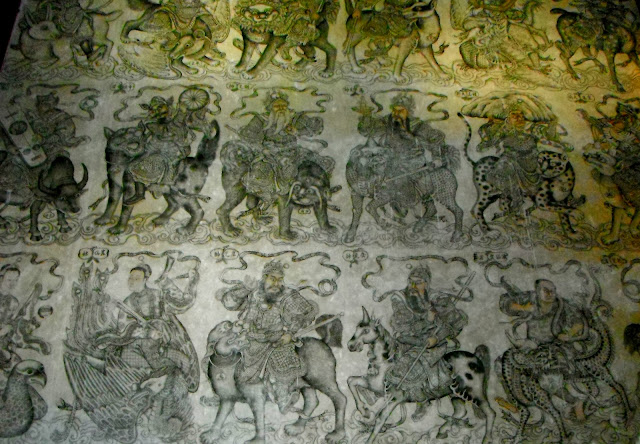 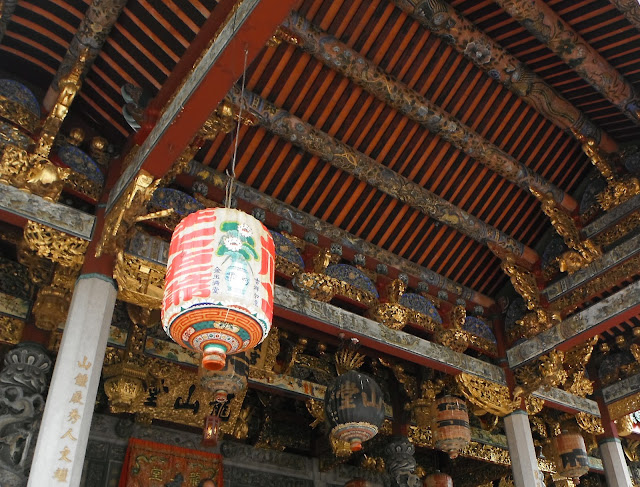 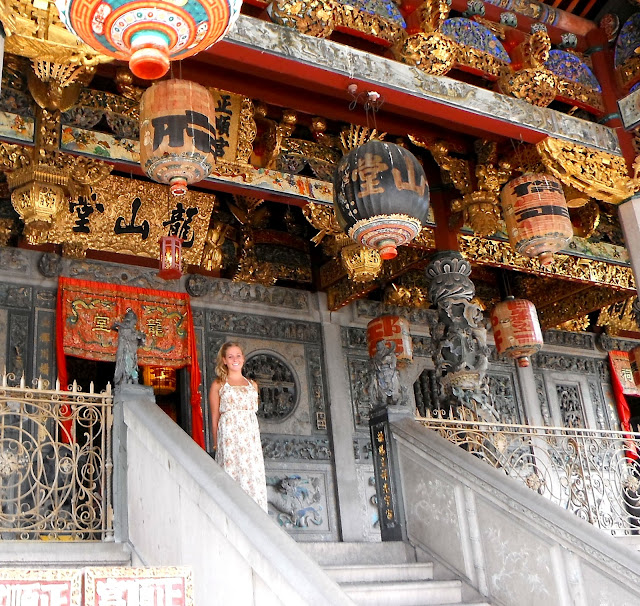 The clanhouse is still used for celebrations and is hired out regularly for banquets, concerts, stage shows and even authentic Chinese opera nights!

The rows of residential terrace houses need a bit of work, and we managed to coax out of one of the workers that they are due to be made into a boutique hotel. In keeping, of course, with the heritage site. I don’t doubt, that it will be incredibly luxurious when it’s finished. You only have to look at the pictures above to see the theme it will follow.