We all felt like we could do just one more big night out, before our bodies just couldn’t cope with any more. Well, Lucy and I did, Emma’s younger and could possibly (and I think did) party every night.

Taxi’s picked us up from the bay of San Antonio and drove us all the way to the other side of the island which was about a 25 minute ride away. Emma impressively chatted away to the driver about the economy in Spanish whilst I dipped in and out of conversation, but mainly gazed out at the view with Lucy. 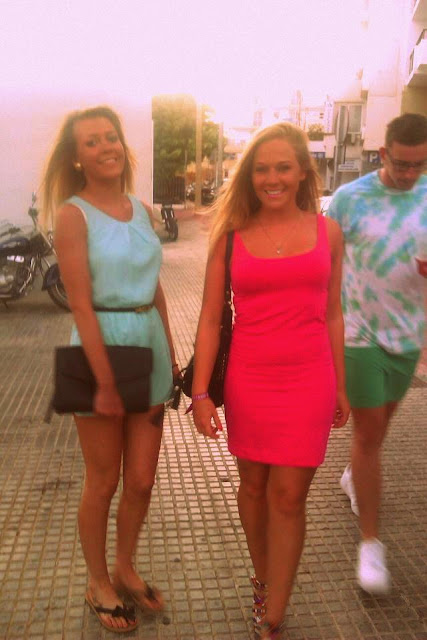 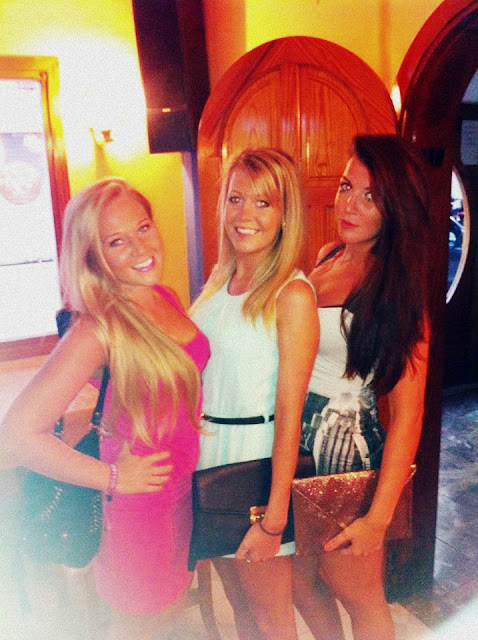 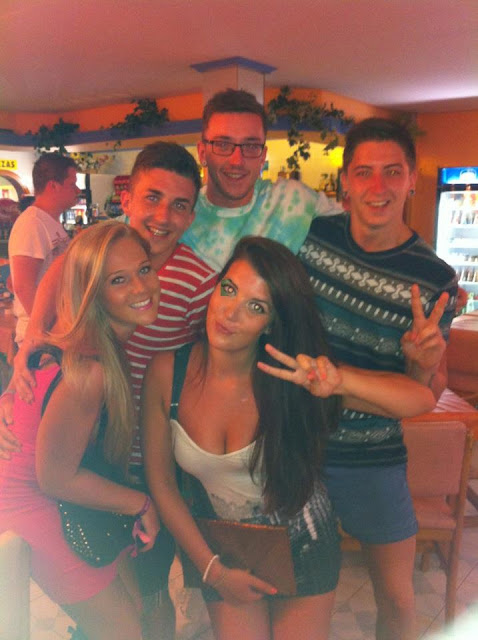 We arrived into Ibiza town and found our way along with the boys to Ushuaia, Ibiza Beach Hotel, where we were ushered through security and into various brightly coloured wrist bands. The hotel was beautiful and I’ve never seen such an incredible party space. It was all open air so they had lit up the pool, had candles burning everywhere, dramatic lighting, you name it, they had it. However, we had only come to see one person a certain Mr Tim Bergling or better known as Avicii! 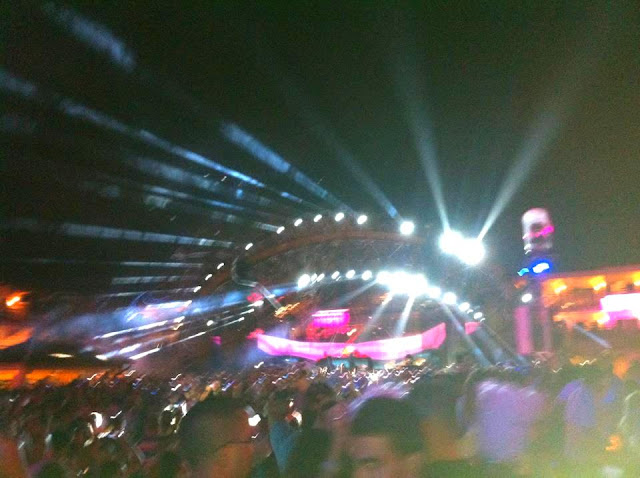 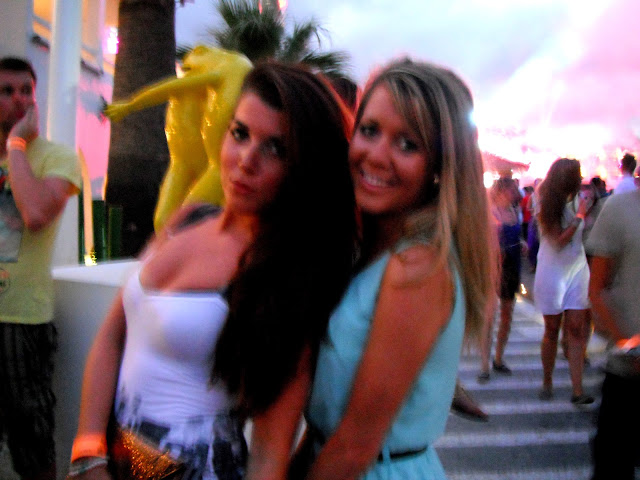 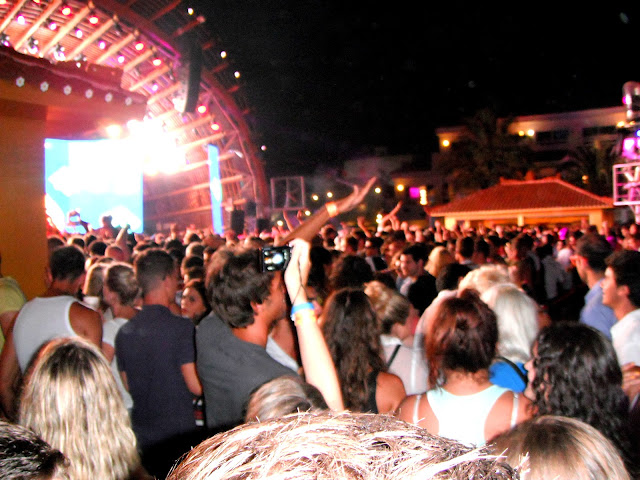 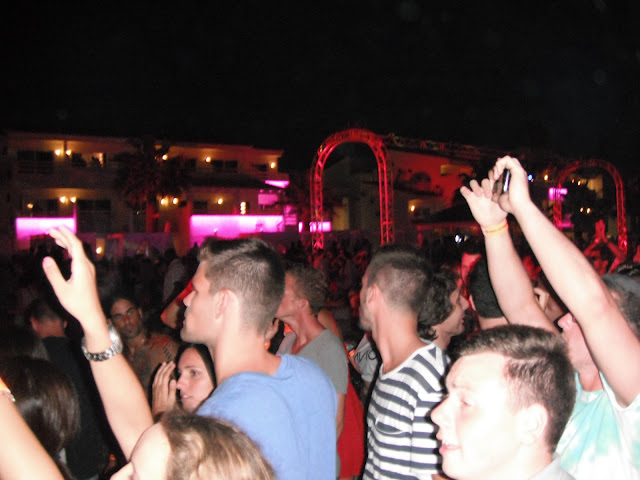 Fighting our way to the front of the crowds, we danced the night away but our stomachs caught up with us (as always) and Lucy and I went on the hunt for food.

We found burgers, and at 12 Euros each they were as good as expected. After filling our stomachs we decided that, trying to fight our way back to the front, past the ever growing mass of people was just too daunting so instead had a wander around. Funnily enough, they atmosphere at the back was considerably better AND it meant that we weren’t being bashed about, elbowed OR trampled on. Win.

Finally we came to an area sectioned off by big burly bouncers where there were beautiful big white sun beds and champagne flowing. The view of the stage from there looked pretty good too and while Lucy and I contemplated what to do next, a man named Raul was introducing himself to us saying “You girls look very lost/bored/look like you need a drink” We nodded, I don’t think we had realised how thirsty we were. He took us by the hands and said “follow me”. A quick glance at each other said “why not”, and we decided there were enough people around us to be safe.

*FYI though kids, even though we followed, you should never ever go anywhere with a stranger that you don’t know.*

He marched us straight up to the big burly bouncers and ordered “wrist bands, for the beautiful girls” we were speechless as he took us directly to the beautiful white sun beds and introduced us to the rest of the table. I have never ever seen so much champagne in all my life, however we quickly gulped down a bottle of water each before accepting a glass of Dom Perignon.

If we thought it was good at the front, this was even better. From our table we could see the stage directly, with no one standing in front of us, elbowing us or stamping on our feet. This was how to party. And we definitely made the most of it. 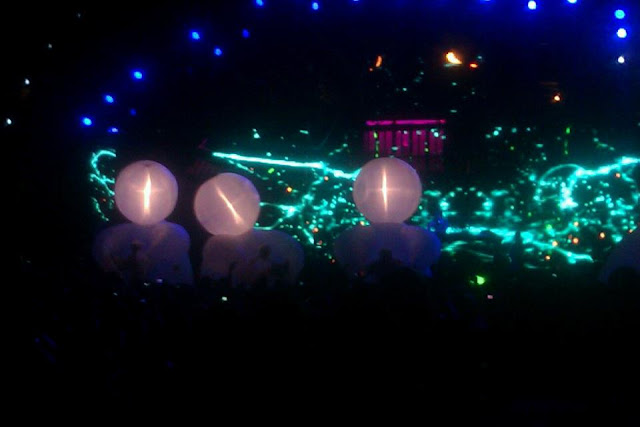 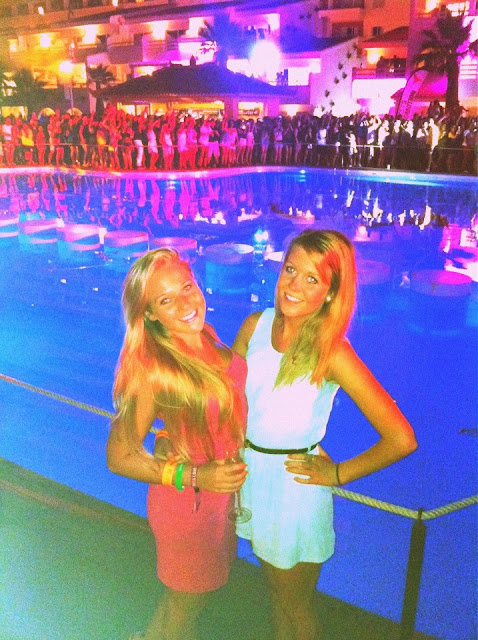 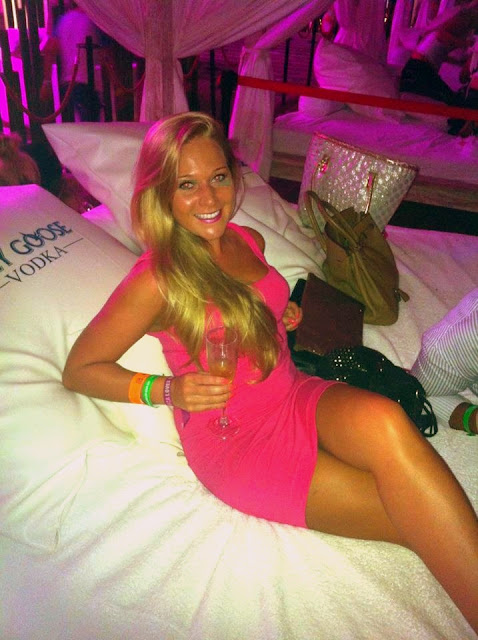 Suddenly I turned to Lucy and mouthed “Emma”, she whipped out her phone and said “Emma, we’re in the VIP area, unless you’re happy staying at the front”. Emma appeared a few minutes later at the rope to VIP looking slightly bemused, but after having a wrist band placed on her wrist and being handed a glass of champagne, she was happy. 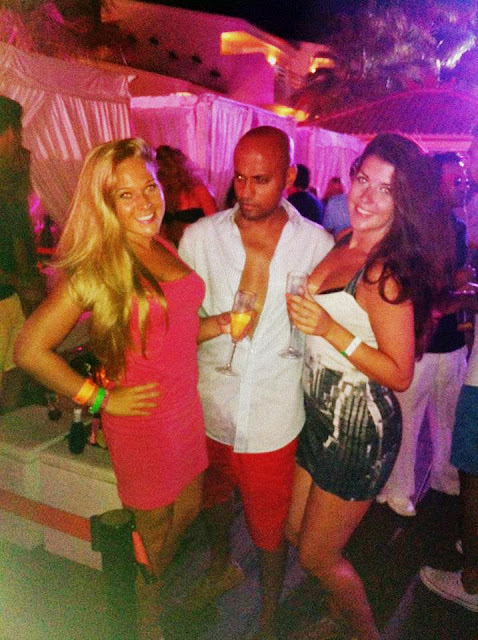 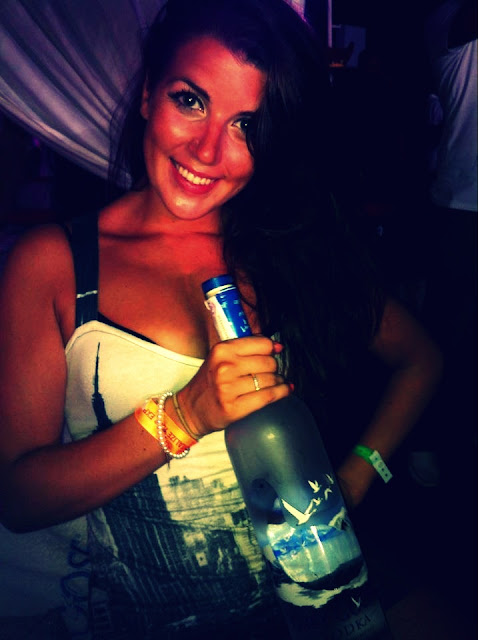 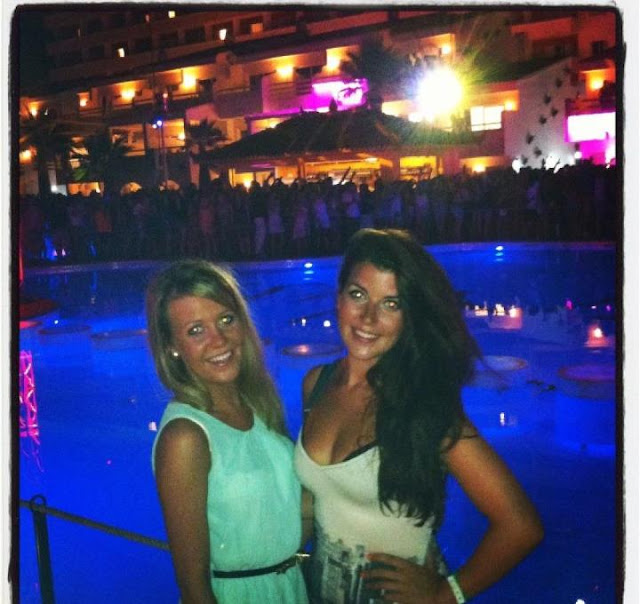 The dancers looked incredible and I still haven’t managed to find out who designed their outfits which were bikinis made of gold, bronze and silver metal, with cuffs on their wrists and suits of armour on random body parts. Whoever designed them, inspiration was obviously taken from Ancient Knights. The dancers didn’t seem too bothered as some of them hovered over the pool spinning on rings and playing with fire whilst the rest balanced on extremely high heels stepping from podium to podium. 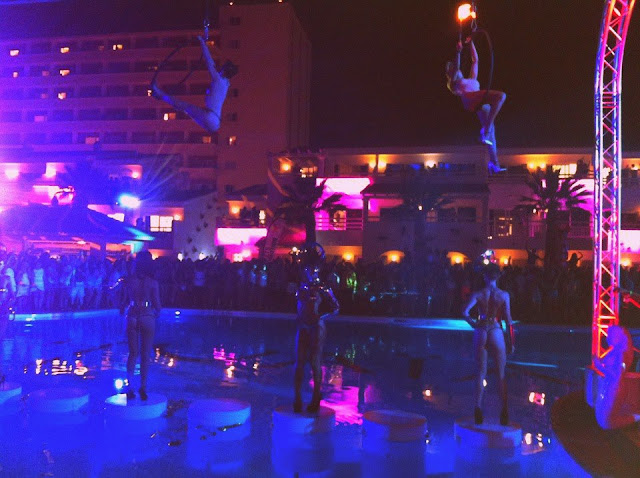 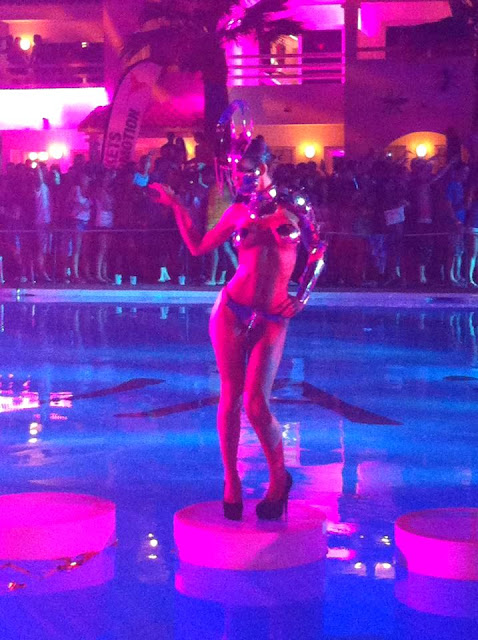 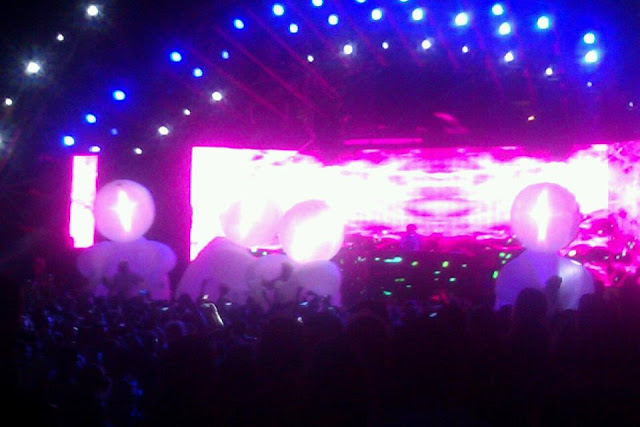 As Avicii finished his set and called it a night, so did most others. We sipped the last of our champagne, thanked our host Raul for his hospitality on the table and headed off to find the boys who were happy jumping around at the front (they do have a good few inches on us to be able to see over people).

On the way, we bumped into a few familiar faces from Essex. 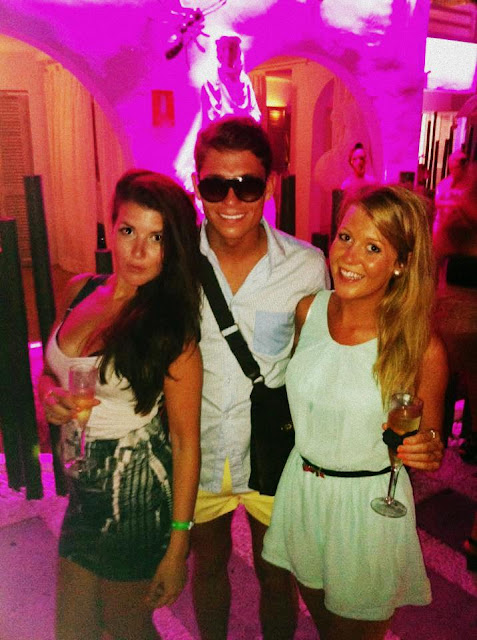 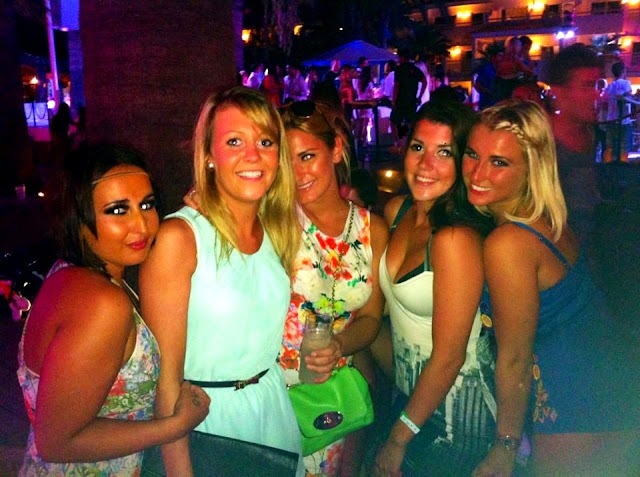 We briefly contemplated a few after parties but thought better of it. Lucy and I did anyway. Emma carried on, as we drifted off trying to figure out just how she had the energy!